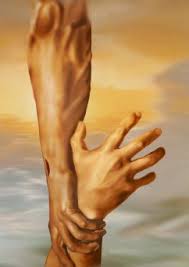 Genesis 3:1 "Now the serpent was more crafty than any beast of the field which the Lord God had made. And he said to the woman, “Indeed, has God said, ‘You shall not eat from any tree of the garden’?”

Introduction:
In a blog written on September 28, 2013 (http://pastormahlon.blogspot.com/2013/09/satans-disastrous-fall-christs-decisive.html) we had explored the disastrous fall of Satan as recorded in Ezekiel 28:11-19 and noted how despite his massive fall and morbid outcomes, Christ came to win a decisive victory on the cross.  Ezekiel 28, we could say, is a prequel to Genesis 3.  The fall and rebellion of Lucifer (Isaiah 14:12) took place in the white space that exists between Genesis 2-3. In today's blog we will be considering the continuation of Satan's activity following that initial and most dramatic fall in a post I'm entitling: "The Adversary, Adam and Almighty Salvation".

Meet the Adversary
Other than Genesis 1-2 and Revelation 21-22, the remaining 1185 chapters of God's Word occur in a setting where sin and rebellion are active, whether in the invisible or visible realm.  The morbid outcomes of Satan's disastrous fall led to the demonic realm and the fall of man recorded here in Genesis 3.  The villain in Genesis 3 is introduced quite simply as "the serpent" in 3:1.  Elsewhere he is known as "Satan" or "Adversary".  The Adversary's M.O was basically three-fold.

1. Satan attacked God's character
Note what he says to Eve in Genesis 3:1: "Indeed has God said?" Satan the Adversary loves to take God's periods and turn them into question marks. He loves to plant doubts in people's minds concerning whether or not God has their best interest in mind. God's character is integrally linked to His word, the second step of Satan's attack.

2. Satan attacked God's Word. Genesis 3:1
God's word has always been and always will be the main object of Satan's attack.  The word used to describe him in Genesis 3:1 as being "more crafty" is the same Hebrew word translated "naked" in Genesis 2:25. It describes the ability to have unhindered communication or having the ability to uncover mysteries and secrets.  Satan had indeed fallen, and undoubtedly had retained some of his angelic nature as a wise, cunning and powerful being.  His nature as an angelic being (albeit a fallen one) remained intact despite his fall from Heaven.  As the Apostle Paul reminds us in 2 Corinthians 11:14, Satan has the ability to still transform himself into an angel of light. Satan twisted (Genesis 3:1), then added (3:3) then replaced God's word with his own words (3:4). Eve's resulting confusion and twisting, adding and replacement of God's Word with her own conclusion to eat from the tree pinpoints the first signs of Satan's success.

3. Satan attacked God's man. Genesis 3:2-7
As the woman gave into Satan's seduction, Adam her husband had to choose between her and God. Adam's great failure was in the fact he did not take dominion over Satan in the garden. The attack on the pinnacle of God's visible creation - man, was Satan's way of trying to exact vengeance on the God who had cast him out of heaven. Satan hated Adam and Eve due to the fact that they were God's co-king and co-queen of creation. (compare Psalm 8) Romans 5:12 describes the outcome: "Therefore, just as through one man sin entered into the world, and death through sin, and so death spread to all men, because all sinned."

Meet Adam
With the Adversary's plan sprung, and the bait being taken, Adam's responses were the total opposite of what God had commanded him to do in Genesis 1:26-28 and Genesis 2:15-25. God had given man a "covenant of works" which was a probationary arrangement to test whether or not he would heed God's word. The covenant contained a few simple commands: "take dominion over creation" (Gen. 1:26-28); do eat from every tree (2:15-17); don't eat from one tree (2:18) and delight in your wife (2:19-25). God provided abundant grace to carry out the command (a garden, original righteousness, and His own presence with Adam).

Satan's M.O was set to be sprung, for he know if Adam broke the Covenant of works, there would be no way Adam could redeem himself.  In twisted hatred, Satan wanted Adam to be in the same boat as he - incapable of redemption and thus putting (at least he thought) a severe monkey wrench in God's Sovereign purposes for creation.

Even though Eve was Satan's immediate target, it was Adam who bore the direct blame for the fall. Why? First he did not take dominion over the serpent by declaring God's word as it had been given to Him. Secondly, when Satan kept focusing on the only negative prohibition in the covenant of works (thou shall not eat), Adam did not chime in and correct him.  Thirdly, Adam obviously chose to eat from the tree of knowledge of good and evil, thus ignoring the other tree which God had freely given Him. Then finally, Adam did not delight in his wife but idly stood by while Satan wove his lies.

The Adversary's attack on Adam worked. The fall he had begun in Heaven had spilled over onto earth.  God's covenant of works with Adam was broken.  There was nothing Adam and Eve could do.  Furthermore God was under no obligation to redeem.  Rather there was only one inevitable outcome: death! Had the Adversary won? Were Adam and his wife irretrievably lost for good? Was God Almighty's plans for creation jeopardized? Lets consider the final point in this narrative of Genesis 3, namely....

Meet Almighty Salvation
The Covenant of works laid broken.  Furthermore since a man had broken it, a man would have to come and fulfill it.  What God did next after pronouncing his curse on the Serpent (Genesis 3:14) was undoubtedly a shock to every angel, creation, Adam and his wife and Satan. Genesis 3:15 states - "And I will put enmity between you and the woman,
And between your seed and her seed; He shall bruise you on the head, and you shall bruise him on the heel.” God issued forth a new Covenant  - a Covenant of grace, wherein He, rather than man, would fulfill the promises and obligations.

Yes there was the awful curse of Genesis 3:9-24, however the blackened sky of that curse was outshone by that starry constellation of amazing grace in Genesis 3:21. What did God do in Genesis 3:21? He provided a substitute for Adam and Eve. He clothed them in the innocence of substitution (in their case two animals) through the shedding of blood. Based upon His grace that led to Adam confessing his wife as "the mother of all living" - i.e Eve, the pattern for the Covenant of grace was set: By grace alone, through faith alone in the shed blood of God's innocent substitute - alone.

Now why do I have "alone" after each of those statements? Because the temptation for man to try to get to God by way of performance (covenant of works) is part of the fall-out from the fall of man.  God stationed an angel - a cherubim at the East entryway of the Garden to bar Adam and Eve's access to the tree of life. God knew that if they got to that tree - they would have lived forever in unredeemed separation from him.

God's act of banishing our original parents was both an act of judgment and grace.  Judgment in the sense that they would lose their place and position of idyllic existence in the Garden.  However the grace God demonstrated was that Adam and Eve would still get to live due to grace, and that the way to eternal life was to be fulfilled by another Adam, the incarnation of God in the Person of the Son - Jesus Christ.

The accomplished work of Christ that reaches forward into time to every person God sets His affection upon to redeem by His Spirit in saving grace through faith reached back to Adam, Eve and every saint of God in the Old Testament.   Jesus would come and live a perfect life and thus fulfill the otherwise broken covenant of works and by his death and resurrection pay the price to ensure God's covenant of grace.

Conclusion
In today's post we have considered the Adversary - Satan.  We have also looked at Adam and we have then considered Almighty salvation.  My prayer is that you, dear reader, have by grace through faith received God's precious gift of salvation won by and paid for by Jesus Christ - the mighty victor over the Adversary and the Savior of those of Adam's race who by grace through faith believe on Him. (Romans 5:11-21)
Posted by mahlon at 7:35 AM No comments: