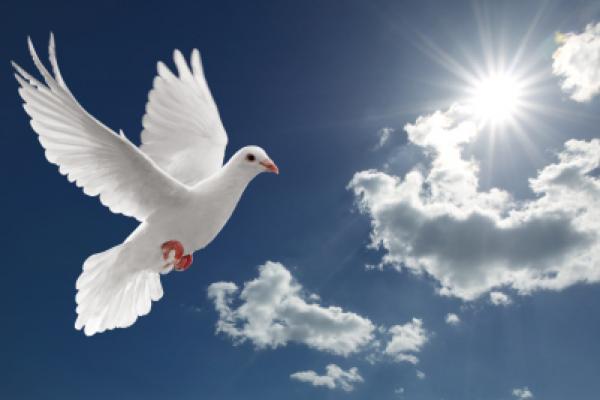 Acts 2:1-2 "When the Day of Pentecost had fully come, they were all with one accord in one place. 2 And suddenly there came a sound from heaven, as of a rushing mighty wind, and it filled the whole house where they were sitting."

Happy Pentecost Sunday! The New Testament records in Acts 2 that the Holy Spirit came in power and presence, birthing forth the early church some 50 days after Jesus Christ's resurrection.  Pentecost Sunday occurs 50 days after Easter (hence the reason for the name "pentecost", "penta" = "50"), and is the focus of today's blog.  Let the reader note that Pentecost, though pointing primarily to the day in which the Holy Spirit came in power and glory to empower Christ's church, was not originally a New Testament holiday.  Back in the Old Testament, during the days of Moses, God revealed to the Jews seven festivals or "feasts".  The middle one on the Jewish Calendar was referred to by various names: "Shavu'ot", "Feast of Weeks",  and of course "Pentecost".  As you will see in a moment, Pentecost has great significance for the Christian in understand the wider scope of redemption revealed in the Bible.  Below I am going to list reasons why Pentecost is so important for you as a Christian as we see in both the Old and New Testament Scriptures.

1. Pentecost's Purpose: Harvest
It was to occur 50 days after the bringing forth of the first fruit of the barley harvest, the day which would become Jesus' resurrection of the dead.  The Jews had two harvest seasons: spring harvest for Barley and Summer Harvest for the Wheat crop.  Among other images, wheat symbolizes the harvest of souls in salvation.  (Matthew 3, 12 and 13)  We know from Acts 2 that 3,000 souls were saved on the day the Holy Spirit came - a mighty harvest indeed! (Acts 2:41)

2. Priority of God's Word
The very first festival revealed to the Jews was that of Passover, commemorating God's deliverance of them out of Egypt. (Exodus 12-15)  Fifty days after their crossing the Red Sea, God delivered the Law or Torah on Mount Sinai in Exodus 19-20.  Through the centuries the Jews came to connect their celebration of that fiftieth day not only for the purpose of God's revealed festival of Pentecost, but also the revelation of His Law or Torah to them.  This commemoration came to be called "Shavu'ot" or the bringing forth of the Law.   A significant parallel connects the very first Pentecost with the one in Acts: namely at the time of the Law's revelation, 3,000 souls died (compare Exodus 32:28).  However in the New Testament Pentecost in Acts 2, 3,000 souls were saved!

3. Prophecy is fulfilled
Peter preached on the day of Pentecost the explanation behind the Spirit's arrival.  In Acts 2:17-21 Peter quotes verbatim Joel 2:28-31, a prophecy written almost 800 years before the events in Acts.

4. Promise fulfilled
Jesus had promised His disciples in John 14 and 16 that He would not leave them comfortless once He ascended in to Heaven, but that the Father and He would send the Holy Spirit in His name.  Jesus kept His promise to both His disciples and us, thus another significant truth about Pentecost.

6. Proof that Jesus raised from the dead and is Ascended
Pentecost, as John Piper notes, is the reason we know anything about Easter.  The fact that the Holy Spirit came is proof that Jesus did indeed raise from the dead and that He made it to heaven to be at the Father's right hand. Pentecost and it's outcome is proof positive that Christ is ascended and that the Gospel is undoubtedly true.

7. Preview of things to come
The seventh significant purpose or reason for Pentecost in the scripture lies in the fact that the Spirit came to give His people a preview.  Throughout the 224 prophecies that pertain to Christ's return and the coming Kingdom, we are told about a New Heavens and new Earth where there will be no curse.  In Acts 2, we see evidence of God reversing, on a local level, the curse of the languages He pronounced originally in Genesis 11:1-10 at Babel.  Throughout Acts 10 and 19, this miracle would be repeated.  Pentecost tongues was a miracle insofar as 17 different language groups got to hear the Gospel all at once from men who had never been trained in them.1  For a brief span of hours, the Spirit so gifted the Apostles to share Christ with nationalities gathered at Jerusalem for the Feast of Pentecost.  Another curse that was reversed and gave a foretaste of things to come is the fact that the Spirit returned to the Lord's temple.  Ezekiel the Prophet saw the Spirit of God leave the temple in Ezekiel 9-10.  However the Spirit came back to inhabit a new temple of flesh and blood, the church.  We know that when Christ comes back, Israel will be restored and she will be indwelt by the Spirit of God. (Zechariah 12-14; Romans 11:25-26) Previews such as these are granted to us as a result of Pentecost.

8. Person of Christ
Jesus Christ in His pre-pentecost state concerning His humanity was limited to being in one place and at one time.  Whenever the Spirit came, though Christ was in Heaven, still retaining a glorified humanity, yet by His Divine nature shared together with the Spirit, we can on an experiental level be ministered to by Jesus through the Holy Spirit.  To illustrate, I can watch and experience events half-way around the world by way of television.  Though those events and people are localized from the origin of the signal, yet by way of the signal beamed to my satellite dish, I can experience them.  Likewise the Holy Spirit, sharing in the same Divine nature with the Divine Son of God, brings the Person of Christ to us, Who touching His humanity is localized in Heaven at the Father's right hand.  This post-pentecost Jesus is thus able to minister globally and universally to each of his people by the Holy Spirit's ministry.

9. Partition between Old and New Testaments
When did the Old Testament or Covenant come to an end, and when did the New Testament era or Covenant begin?  Acts 2 is the international dateline of the Bible.  Though from a literary standpoint our New Testaments begin at Matthew, yet from a Chronological standpoint, Pentecost in Acts 2 is the official beginning of the church age.  Now mind you, it would take 30 years on either side of Pentecost before the transition from Old to New Covenant was complete.  Jesus' entry into time by His virgin birth 30 years before Pentecost signalled the beginning of the end of the Old Testament economy.  Likewise by the end of Acts 2, some 30 years after Pentecost, the New Testament church age was well underway and in full swing.

May you dear friend have a wonderful Lord's day and remember: fifty days after Easter is Pentecost Sunday.  My hope is that through these thoughts from scripture, we can gain an ever richer view of all the Lord has done for us by the sending of His Holy Spirit, Who points us to Jesus.

1. I don't believe the gift of tongues spoken of in the Bible has anything to do with a private prayer language or estatic utterance.  Rather the gift of tongues was given at Pentecost for the purpose of evangelizing people groups whose language had not been previously learned, rather than for private edification.  I have some dear friends who will advocate the prayer language position from passages such as 1 Corinthians 12 and 14.  However the context of those two chapters actually undercuts the private prayer language position, since the Apostle Paul is urging his readers to seek the greater gifts that will "edify the body".  Oftentimes, modern tongue speakers will claim that their abilities bring personal edification, an outcome that is opposite of what Paul was teaching in the Corinthian letters.  Whatever may be claimed about the modern day phenomenon called tongues, I don't personally think the phenomena called "tongues" matches the gift of tongues recorded here in the New Testament.
Posted by mahlon at 7:52 AM No comments: