Grand Introductions to Jesus Christ from the 4 Gospels 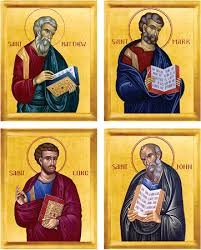 Matthew 1:1 "The record of the genealogy of Jesus the Messiah, the son of David, the son of Abraham."

Grand introductions to Jesus Christ from the four Gospels
Today's post is all about the introductory sections or prologues of the Four Gospels of the New Testament. We are entitling this post "Grand Introductions to Jesus Christ from the Four Gospels" because quite frankly, no other perfect and greater introductions exist in all of literature that can suitably introduce God in human flesh - Jesus Christ. Theologian A.W Pink, in meditating upon Hebrews 10:19-20, compares the four Gospels to the four pillars of the tabernacle that suspended the veil between the holy place and most holy place. He writes: "Just as these 'four pillars' served to display the beautiful veil, so in the four Gospels we have made manifest the perfections of the only-begotten of the Father tabernacling among men."1

As we outline each of the prologue sections to the Four Gospels, we will survey them according to the ordering of events in which they introduce the Savior. In the introductory sections of the four Gospels we are given three of the following grand introductions:

Introduction #1 The Majestic Deity of Jesus Christ in John 1:1-18
Before Genesis 1:1, there was the Son in eternity with the Father (and the Spirit) in John 1:1-3. The Apostle John was the last to write a Divinely inspired Gospel, and yet it is he who gives us the fullest introduction to the Son in His Majestic Deity. If we were to outline the prologue of John 1:1-18, we could say that Jesus Christ is introduced here as:

Regarding John's grand introduction: Jesus Christ is the Almighty Creator, the Absolute revelation of God Who appeared in human flesh.
Introduction #2 Miraculous birth of Jesus Christ in Matthew 1:1-24 and Luke 1-2
Matthew and Luke's Gospels together give us the second grand introduction to Jesus Christ in terms of His miraculous birth. Matthew begins with a genealogy, a bloodline in 1:1-17, followed by an angelic announcement to Joseph concerning the Christ child's virgin conception, name and mission in 1:18-25. Matthew 2 picks up Jesus' life two years later, whereby the wisemen come to worship him. Matthew's account aims to introduce Jesus Christ as the legal king of Israel.

Luke's Gospel, like Matthew, introduces the reader to Jesus as the virgin born Son of God. However rather than starting with a genealogy, the accounts of Jesus' early life ends with a genealogy in Luke 3:23-38. The purpose of the genealogy is to chronicle Jesus' biological right to not only the throne of Israel by David, but ultimately as the heir of this world as the New Adam. God chose to have Luke begin with testimonies and fulfillment of prophecy as leading the way to Bethlehem's cradle in Luke 1:1-2:52, followed by a reminder to readers of Jesus' true identity by way of John the Baptist's ministry and Jesus' baptism in Luke 3:1-22. Luke 1:26-38 functions as the epicenter of the infancy narratives of Jesus' life.

Together Matthew and Luke give us the second grand introduction to Jesus Christ by way of bloodlines, testimonies, prophetic fulfillment and God's Sovereign purposes in bringing about of the Son's humanity in His miraculous birth. John's prologue of course reminds us that before becoming the babe in the manger, the Person of the Son has for all eternity been Majestic Deity with the Father and Spirit.
Introduction #3 Ministry of Jesus in Mark
Mark's prologue is found in Mark 1:1-13. Unlike John, which begins with Jesus Christ's Majestic Deity in Eternity, and in contrast to Matthew and Luke that details His miraculous birth in His assumption of full humanity, Mark introduces us to Jesus as a 30 year old man. If we were to outline Mark's prologue, we could note the following grand introduction of Jesus:

a. Preaching of John the Baptist prepares the way to meet Jesus. Mark 1:1-8

c. Personal temptation of Jesus demonstrates ability to be the ransom for sin. Mk 1:12-13.

Interestingly enough, the events recorded in John 1:19-3:36 fit in between Mark 1:13 and Mark 1:14, which is one reason why John's Gospel is sometimes called the Divinely inspired "supplement" to Matthew, Mark and Luke. Likewise, the first three Gospels are called the "Synoptic Gospels" because they "see together" the life of Jesus as He ministered in and around Galilee, while John covers His ministry more to the South in and around Judea and Perea.

So why look at all four Gospels in one post to understand the Person of Jesus Christ? The great Baptist Preacher John A. Broadus had this to say about knowing Jesus through a harmonization of the four Gospels: "striving to come ever nearer to Him as our Teacher, Exemplar, Redeemer and Lord."2 Would that be our goal, dear reader.