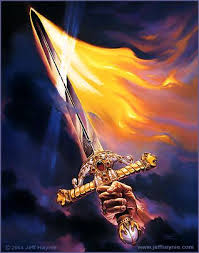 In today's post we will be interested in particular scriptures that help us diagnose our culture and the warfare that ensues between the demonic realm, human beings and the Gospel.  As you read in the opening passage above, Jesus refers back to the days of Noah in Genesis 5-9 to compare what it was going to be like in the time proceeding His soon return.  As we have pointed out in past blogs, there is no question we are living in the "last days", being that authors such as the writer of Hebrews in Hebrews 1:1-2 referred to his own time as the last days.  Understanding how the realms of the fallen angels and men operate and conflict can help us better understand what is at stake in Christ's command for His church to fulfill the great commission.  The title of today's post give us the direction and order for the headings will follow in tracing out the text of Genesis 5-6.

1. The Gospel must be testified among men. Genesis 5
According to Genesis 4:25  "To Seth, to him also a son was born; and he called his name Enosh. Then men began to call upon the name of the Lord." From Adam's to Noah would span ten generations and a line of 1656 years of unbroken witness of the Gospel.  As you read the accounts of the men listed in Genesis 5, their ages and the repeated pattern of "so and so dying" serves to underscore God's scarlet thread of redemption, as well as the need for such redemption.  The names of each of these pre-flood patriarchs is remarkable in its own right - since when put together tell the story of the Gospel:

Now when you take all of these men and put there names together, here is the result:

The Lord who created blood chose to be appointed because mankind had an incurable wound called sin.  He laid hold to what he was appointed to and with the praise of God descended down to earth and walked in perfect obedience to the Father.  Then in the year for which it was sent He worked a powerful salvation to give rest to all who believe on Him.

That dear friend is the Gospel, planned by God and embedded in the lives and even the names of the men He chose to use and to redeem for His name sake.  The Gospel's witness never ceased shining, despite the fact that the world grew more and more dim.  Noah's father Lamech indicates just how desperate that age was in Genesis 5:29 "Now he called his name Noah, saying, “This one will give us rest from our work and from the toil of our hands arising from the ground which the Lord has cursed.”  As Jesus Himself states in Matthew 24:36-41, our day today will be like Noah's time, with the need more than ever to shine the Gospel light. The Gospel must be testified among men. When we come to Genesis 6, we see what will be the first mention of the demonic realm in redemptive history, and thus our second heading in these chapters....

2. The Gospel conflicts with the demonic realm colliding with men
Genesis 6:1-2 makes this interesting statement: "Now it came about, when men began to multiply on the face of the land, and daughters were born to them, 2 that the sons of God saw that the daughters of men were beautiful; and they took wives for themselves, whomever they chose."  Who were these "sons of God" and "daughters of men"? Undoubtedly much ink has been spilled over the exact identification.  To compound the difficulty of this passage in Genesis, we read these words in Genesis 6:4 "The Nephilim were on the earth in those days, and also afterward, when the sons of God came in to the daughters of men, and they bore children to them. Those were the mighty men who were of old, men of renown."  The term "nephilim" also merits attention along with the phrases "sons of God" and "daughters of men" in arriving at the main point of this text.

1. Identifying "the sons of God"
A quick survey of the Bible reveals the following truths about this particular designation: Job 1:6; 2:1; 38:7; Psalm 29:1 and 89:6 all use this phrase to refer to beings in the angelic realm.  Other passages such as Psalm 82:6; Luke 20:36 and John 10:34 ascribe human authorities with this title to show God's delegated authority behind their office. We know full well that angelic beings, fallen or unfallen, cannot procreate (Matthew 22:28-30).  Thus in attempting to nail down the exact identity of these "sons of God" requires further study of the two other terms in this text.1

2. Identifying the daughters of men
We can say without reservation that these women were fully human.  Most able commentators have identified these women as ungodly descendants of Seth, which in having studied Genesis 5 is certainly plausible but not necessary to conclude.

3. Identifying the Nephilim
The third phrase "nephilim" occurs in only one other place in scripture - Numbers 13:33 "There also we saw the Nephilim (the sons of Anak are part of the Nephilim); and we became like grasshoppers in our own sight, and so we were in their sight.”  The term "nephilim" comes from two Hebrew words: "niphal" meaning "fallen" and the plural suffix "im", which when combined together gives us the meaning "fallen ones".  According to Genesis 6:4 "The Nephilim were on the earth in those days, and also afterward, when the sons of God came in to the daughters of men, and they bore children to them. Those were the mighty men who were of old, men of renown." These "fallen ones" were the offspring of the combined efforts of the "sons of God" and "daughters of men".  So the question is: "who are the son's of God".  With the picture before us, I would suggest the following interpretation: that an ungodly line of men (ungodly descendants of Seth perhaps or rulers or despots) were possessed by fallen angels to cohabitate with another line of ungodly women (line of Seth perhaps), with God's judgment resulting in a mutated race of Giants.

Such judgments of God occur throughout the Old Testament, as evidenced by the conflicts such beings had with people like the Israelites in Numbers 13 and King David and Goliath in 1 Samuel 17.

The Gospel light needed to shine amidst the dark conflict between the realm of demons and the realm of men.  In Genesis 6:1-4 we see what happens when Satan, through these fallen angelic beings and wicked men collide.  Genesis 6:5-8 records the outcome of God seeing the great wickedness and violence of man, and thus the need for the Gospel light to shine more brightly. Which leads to our final thought...

The Gospel needs communicated to break the demonic darkness of men
1 John 5:19-20 indicates that despite the world lying in the grip of satanic darkness, the Gospel light must shine forth through us who know the true God and eternal life. Noah was used of God to shine forth the Gospel light. According to 1 Peter 3:18-20, Noah preached the Gospel of righteousness as he built the Ark. The fallen angelic spirits that had possessed the men of that day to cohabitate with the daughters of men is what prompted the judgment of God. (2 Peter 2:4; Jude 6) Noah had been given 120 years, a time frame which only God knew. (Genesis 6:3; Matthew 24:36-37) As a result of Noah's faithfulness, eight souls entered into that Ark as saved people and through the waters they sailed - evidencing the salvation of God that had been wrought in their hearts. As Peter indicates in 1 Peter 3:19-20, Jesus Christ in the course of His death, burial and resurrection proclaimed the Gospel victory in the face of those fallen angelic beings who are now chained in darkness, awaiting final judgment. (2 Peter 2:4)

These observations serve to drive home this closing thought: that Jesus Christ has guaranteed the victory of His Gospel despite the darkness and despite what men may say. Would it be that God would use us in these last days leading up to His Son's return to tell as many people as possible about how Jesus can deliver them from the darkness of this fallen world and their fallen human condition.

Endnotes
1. Many able commentators such as Merrill Unger, R.A Torrey and Charles Ryrie believe these beings to be angelic creatures. Other able scholars such as Keil, C.I Scofield and Scroggie view the "sons of God" to be Apostate Sethites. My own position is a combination of these two views, since I see the Biblical evidence leading slightly in both directions.
Posted by mahlon at 6:22 AM No comments: