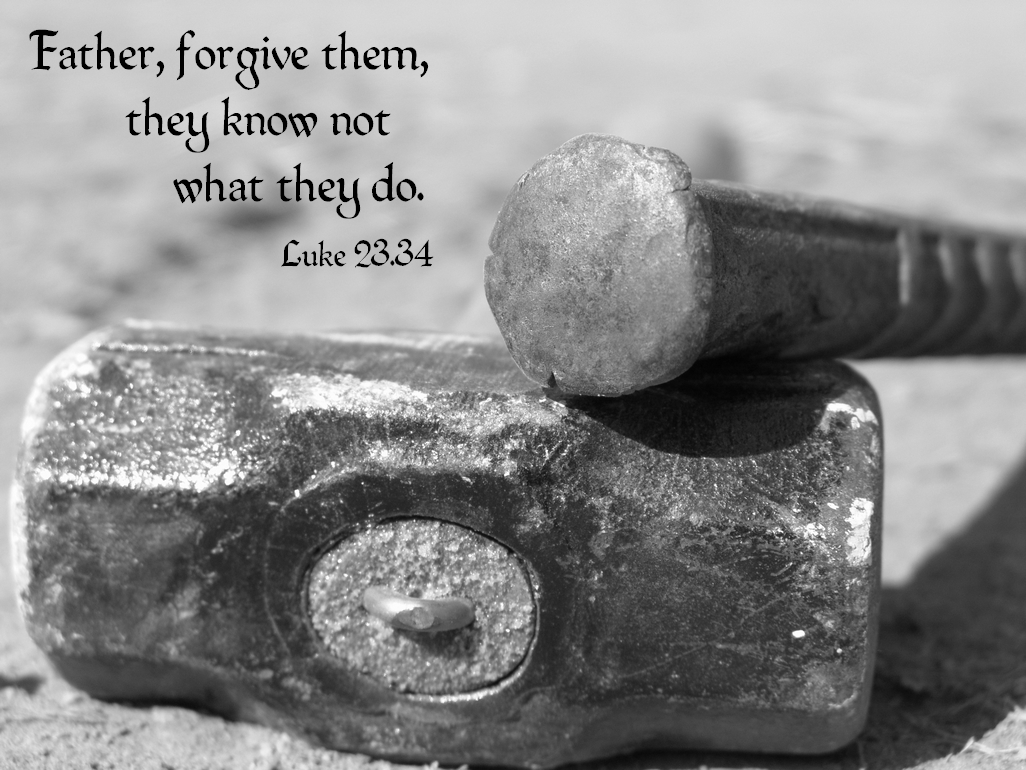 Hebrews 12:3 "For consider Him who has endured such hostility by sinners against Himself, so that you will not grow weary and lose heart."

Today's post wants to take to heart the command given in the opening verse above. How can one practically consider what Jesus did on the cross as a means of strengthening their faith? Remarkably, we have seven sayings or statements uttered by Jesus in the six hours He hung on the cross. The following verses from the Gospels summarize these sayings:

1. “But Jesus was saying, ‘Father, forgive them; for they do not know what they are doing.’ And they cast lots, dividing up His garments among themselves.” Lk 23:34

6. “Therefore when Jesus had received the sour wine, He said, “It is finished!” And He bowed His head and gave up His spirit.” John 19:30

7. And Jesus, crying out with a loud voice, said, “Father, into Your hands I commit My spirit.” Having said this, He breathed His last.” Luke 23:46

By meditating on these sayings, we can find a bottomless well from whence to drink and nourish our otherwise barren soul. Today's post will focus on the first saying or what we could call: "The cry of forgiveness".

Andrew W. Blackwood Jr. writes on page 12 of his book: "The Voice From The Cross" -

"The crucifiers knew well that they were destroying an innocent Man, but each of them had a plausible reason for His act. A soldier, after all, must obey orders. The governor must keep the peace. The High Priest must protect the people from blasphemy. So weak men worked together to destroy the Son of God. They killed Him, but they could not destroy Him. Even in death His love rose above their hatred."

It is in this first saying that Jesus expresses the heart and intent of His atoning work: to provide the basis, the grounds for the forgiveness of sins done by sinners. His addressing God as "Father" would had been shocking to Jewish ears, since no example is found of the Heavenly Father being explicitly referred to on such personal, intimate terms in the Old Testament. Nearly ten times is reference found to the Divine "Father" by name in the O.T. These roughly ten O.T passages speak mainly of the covenant relationship of the Father, Yahweh, to His proverbial adopted son, Israel. Even in spots where the author might address God by the title "Father", it is with the understanding of that person's relationship to the nation of Israel, which was most beloved of God among the nations.
Yet, when Jesus appears on the seen, roughly 140 places refer to the Person of the Father, with nearly all of them addressing Him personally.

The expression "Father forgive them" denotes Christ's unique relationship to the Father, reminding us that He ever remained the eternal Son in union with the Father in the Godhead. However, as man, He looks up and utters this cry and does so for the sake of those crucifying Him and for those who would had done the same from every generation of sinful men.

This first "saying" stays the hand of omnipotence from wiping earth off the face of history and interposes between the wrath of the Father and the sinful human race so deserving of such wrath. Christ here gives reason for why the Father ought to forgive such malevolent persons: "for they do not know what they are doing." Ignorance does not necessarily excuse one from responsibility. After all, the Jews and Romans both knew they were executing an innocent man. However, the part they were not privy to was the fact He was not just a man. The Apostle Paul in 1 Corinthians 2:8 comments - "the wisdom which none of the rulers of this age has understood; for if they had understood it they would not have crucified the Lord of glory."
The wonderful 19th century preacher Charles Haddon Spurgeon notes on page 19 of his book: "Christ's Words From The Cross" -

"Remember, if there be nothing good in you, and if there be everything conceivable that is malignant and bad, yet none of these things can be any barrier to prevent Christ's exercising of the office of Intercessor for you."

The remarkable thing about this first saying from the cross is that it historically depicts Christ's current heavenly activity on behalf of believers. His High-priestly ministry, though assumed following His ascension into heaven 40 days after His resurrection, was nonetheless a part of His Messianic identity. This opening statement gives us a gateway into the width and depth of the courtyard of the crucifixion scene. May the Christian's faith be nourished by this first saying as we contemplate and consider what He achieved over 2,000 years ago.

Posted by mahlon at 7:40 AM No comments: