Why Jesus Was Tempted By The Devil 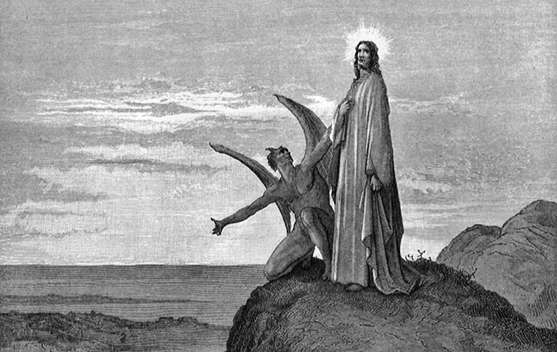 Mark 1:13-14 "Immediately the Spirit *impelled Him to go out into the wilderness. 13 And He was in the wilderness forty days being tempted by Satan; and He was with the wild beasts, and the angels were ministering to Him."

Why is it that when a person becomes a follower of Jesus in saving faith that God does not wisk them away immediately to Heaven? There are many days that I wish that was all there was to the Christian life. However, do you realize that if God did transport a person immediately to Heaven upon their express of trust in Jesus Christ, such an arrangement would not fit the pattern set forth by Jesus.

Whenever we look at the life of Jesus, one could ask a somewhat similar question: "why did not God transport Jesus away by simply having Him prick his finger to bleed forth one drop of blood much earlier in His human life?" The answer to this question is that Jesus had to first secure the perfect righteousness required for the Christian life by undergoing every stage of humanity in order to pay for it by going to the cross. Furthermore, crucifixion was required in order for Jesus to become accursed on behalf of the sinner.

Whenever we look at the Christian life, it is, by design, patterned after Jesus' life. He underwent testing, temptation, battles with darkness, so that He could demonstrate how one human life, yielded to the Father's will and the power of the Spirit, would set forth the way for each an everyone of those who would trust in Him by faith (1 Peter 2:21; 1 John 3:6). In this post today, I want us to briefly look at why Jesus was tempted by the Devil - since that event marks the near beginning of His public ministry following His baptism.

1. The Pattern for defeating the enemy by Jesus.

"For you have been called for this purpose, since Christ also suffered for you, leaving you an example for you to follow in His steps."

It is interesting to note how Matthew and Luke each record the temptation of Jesus by Satan. Matthew's version has Satan tempting Jesus to turn stones to bread (Mt 4:3-4); to leap from the pinnacle of the Temple (Mt 4:5); to worship him to receive all the world’s kingdoms (Mt 4:8). This ordering by Matthew suggests that for Jewish readers, since the Temple was central, the enticement was for Jesus, as man, to take up His role of Messiah/King without going to the cross.

Luke has Satan entice Jesus to turn stones to bread (Lk 4:3-4); express worship of him to obtain the world’s kingdoms (Lk 4:5); to test God by leaping off the pinnacle of Temple (Lk 4:9). Luke’s ordering suggests that for his primary Gentile audience, with whom world conquest was everything, Satan was tempting Jesus to seize the world, thus, skipping the cross.

If we take both Matthew and Luke's records to indicate a string of repeated, intense cycles of temptation near the end of Jesus' experience in His 40-day trek through the Judean wilderness, then we have the full view of how intense this period was. Jesus was tested in both the religious or spiritual sphere and the theater of the world. Mankind craves control. Whether by manipulating people by the misuse of religion or through means of materialism, humankind's propensity to be bound under the yoke of temptation reminds us of what the Fall of Adam produced. This is why the Apostle John records in 1 John 2:15-17 -

As Jesus stood toe-to-toe with Satan, he handed Satan his first defeated at the hands of a man. Jesus denied His self-will (i.e. “lust of the flesh) in not turning stones into bread, but instead drew strength from God’s words. As to the kingdoms of this world (lust of the eyes), Jesus remained true, rather than giving into self delusion. Finally, with regards to Him not jumping from the pinnacle of the Temple, Jesus denied any right over his own life (i.e. pride in what one has, pride of life), since as man, He drew His sufficiency from the Heavenly Father.

What Jesus did, as the "Second" or "New Adam" (see Romans 5:14; 1 Corinthians 15:45-47), was to set the pattern for how all of those redeemed in saving faith are to "fight the good fight of faith" (see Ephesians 6:11-13; 2 Timothy 4:8-9).  If I, as a Christian, am to better understand why I must go through temptations; testings; disappointments; heart-aches; stretching of personal faith; periods of wondering whether God cares for me; sensations of the Kingdom of darkness; and on-and-on; I must realize that the Christian life is patterned after "the pattern-man", "The New Adam", the Lord Jesus Christ.

However, we don't simply have a pattern when it comes to fighting the fight of faith - as important as that is. Praise be to God, as a result of Jesus' resurrection and ascension into Heaven, as well as by the ministry of the Holy Spirit, the Christian has access to Jesus for the power to "fight the good fight of faith". Hence...

2. Power for defeating the enemy from Jesus.

Whenever you consider how the New Testament is laid out with respect to how the believer draws strength from the Lord Jesus Christ: The Gospels portray Christ; Acts preaches Him; The Epistles explain Him; Revelation exalts Him. What will follow from here are citations of New Testament passages which show how the Christian life is connected to all Jesus experienced by way of His temptations.

In as much as His temptation by Satan near the beginning of His ministry was of utmost intensity, yet, throughout His experience here on this earth, Jesus was assaulted and insulted. Thankfully, Jesus never caved into pressure. Note with me the following texts which explain how the Christ-follower has power for defeating the enemy.

Luke 22:28 “You are those who have stood by Me in My trials”. Jesus expresses to His disciples how He experienced "trials" throughout the duration of His ministry leading up to the cross.

"saying, 'Father, if You are willing, remove this cup from Me; yet not My will, but Yours be done.” 43 Now an angel from heaven appeared to Him, strengthening Him. 44 And being in agony He was praying very fervently; and His sweat became like drops of blood, falling down upon the ground."

It was in the Garden of Gethsemane (literally, "the Garden of the Olive Press") that Jesus, in His humanity, felt the pending weight of God's wrath on sin. His submission to the Father's will by way of His human will would show how He, yielded to the Holy Spirit, would push through and do what needed to be done. From hereon I'll quote three more passages as we finish out today's post. As the reader will see, the following texts link together Jesus' temptations to how the Christ-follower draws strength for everyday Christian faith.

Hebrews 2:17-18 "Therefore, He had to be made like His brethren in all things, so that He might become a merciful and faithful high priest in things pertaining to God, to make propitiation for the sins of the people. 18 For since He Himself was tempted in that which He has suffered, He is able to come to the aid of those who are tempted."

Hebrews 4:15-16 "For we do not have a high priest who cannot sympathize with our weaknesses, but One who has been tempted in all things as we are, yet without sin. 16 Therefore let us draw near with confidence to the throne of grace, so that we may receive mercy and find grace to help in time of need."

2 Cor 10:3-4 "For though we walk in the flesh, we do not war according to the flesh, 4 for the weapons of our warfare are not of the flesh, but divinely powerful for the destruction of fortresses. 5 We are destroying speculations and every lofty thing raised up against the knowledge of God, and we are taking every thought captive to the obedience of Christ."