P3 Introducing John Mark: Author Of The Second Gospel Who Fought To Know Jesus Better - How The Lord Rebuilt A Broken Man 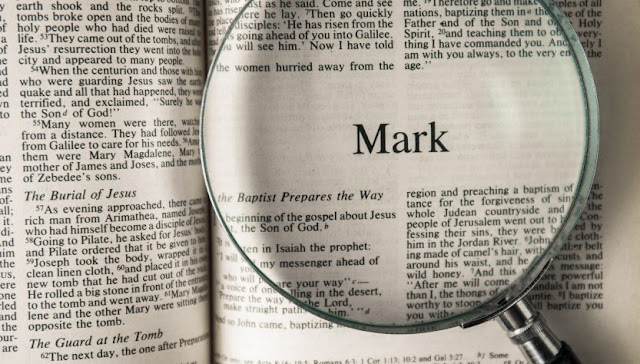 Colossians 4:10 "Aristarchus, my fellow prisoner, sends you his greetings; and also Barnabas’s cousin Mark (about whom you received instructions; if he comes to you, welcome him)."

1 Peter 5:12-13 "Through Silvanus, our faithful brother (for so I regard him), I have written to you briefly, exhorting and testifying that this is the true grace of God. Stand firm in it! 13 She who is in Babylon, chosen together with you, sends you greetings, and so does my son, Mark."

We have considered the life story of John Mark, the author of the second Gospel in the New Testament. Why? Mark's story aids us to see a man who fought to know Jesus better, If we were to distill the lessons we have learned thus far from his life, we could capture it in three headings:

1. We all begin by knowing about Jesus.

2. You must be born-again to know Jesus.

3. There is a battle to know Jesus better.

Mark experienced all three of these in his life. As we look at the above three opening citations, Peter's remarks in 1 Peter 5:13 testify that Mark was converted under his preaching. We had noted in the last post that Mark experienced saving trust in Jesus between that moment we first met him in Mark 14:51-52 until we arrive on the scene at Mark's mother's home in Acts 12. Mark went from "knowing about Jesus" to "knowing Him". We then noted how Mark would start out with Paul and his companions on their missionary journey in Acts 13:4, only to leave them behind near the end of the chapter.

How the Lord rebuilt a broken man

Mark was a broken man. Thankfully, he had a Godly cousin named Barnabas who took him under his wing (Acts 15:39). Twelve years would pass until we find Mark commended by both Paul (see above, Colossians 4:10 and then later in 2 Timothy 4:11). As already referenced, Peter referred to Mark has "my son" in 1 Peter 5:13. Such apostolic commendations of Mark reveal that God had done a great work in his life. The great commentator Herbert Lockyer has this to say of Mark's recovery from failure:

"But Mark had won his spurs again and recovered his place in apostolic esteem. The years the locust had eaten were restored and he became a valued colleague of Paul (Colossians 4:10, 11; Philemon 1:24). A further impressive testimony to Mark's reinstatement is found in Paul's tribute to Mark's usefulness (2 Timothy 4:11). The wound was thoroughly healed."

Have you ever felt useless? I have. Have you ever found renewed joy when you realized God still had a work for you to do? I have. What joy coursed through Mark's heart. I often think of what would had happened if Barnabas had given up on his cousin? More to the point - what would had occurred if the Apostle Peter himself had not taken on Mark as his protege?

Church history has a surprising amount of material on Mark outside of the New Testament. I will only cite a few examples, since there is a large amount of material. The following citations illustrate the benefits the come with continuing to fight the good fight of faith in knowing Jesus better.

How God used Mark until his dying day

The fourth century church historian Eusebius records in Book II, chapter 15 of his "Church History" the following of how Mark would come to write his Gospel:

"And so greatly did the splendor of piety illumine the minds of Peter's hearers that they were not satisfied with hearing once only, and were not content with the unwritten teaching of the divine Gospel, but with all sorts of entreaties they besought Mark, a follower of Peter, and the one whose Gospel is extant, that he would leave them a written monument of the doctrine which had been orally communicated to them. Nor did they cease until they had prevailed with the man, and had thus become the occasion of the written Gospel which bears the name of Mark. And they say that Peter when he had learned, through a revelation of the Spirit, of that which had been done, was pleased with the zeal of the men, and that the work obtained the sanction of his authority for the purpose of being used in the churches."

Whenever you read the above quote of Eusebius in context, the Apostle Peter had fought the ravages of the heresy of Simon the Magician, whom we read of in Acts 8:18-24. God had done a wondrous work. Peter and he both counteracted the error of Simon through the eventual publication of his gospel. The Roman historian Tacitus writes of how the Roman Emperor Nero had persecuted Christians a few years before the writing of Mark's Gospel. The combination of fighting heresies and knowing of persecution provides the backdrop for the writing of Mark's Gospel,

The so-called "Fragments of Papias", authored by a student of Polycarp, who in turn was a student of the Apostle John himself (thus Papias would had known John), records the following about Mark's Gospel in his third fragment, verse 16:

What I like about this quote is that it contains one of the earliest evidences of the church father's teaching on the inerrancy of the New Testament documents - of which Mark's Gospel was an example. I could give a few more quotes, but suffice to say, Mark would pen his Gospel under the inspiration of the Holy Spirit. The Gospel of Mark we have today is a testimony of, among other things, of how Jesus can rebuild a broken man.

Other records of church history tell us that Mark would go to Alexandria Egypt to begin a church. Mark would be martyred for his faith in the Lord. The 16th century writer John Foxe records for us the record of Mark's death in his famous "Foxe's Book of Martyrs", page 17:

"Was born of Jewish parents of the tribe of Levi. He is supposed to have been converted to Christianity by Peter, whom he served as an amanuensis (that is, a secretary or scribe), and under whose inspection he wrote his gospel in the Greek language. Mark was dragged to pieces by the people of Alexandria, at the great solemnity of Serapis their idol, ending his life under their merciless hands."

Mark fought the good fight of faith. He fought till the end to know Jesus better. The second Gospel of the New Testament that bears his name testifies to this Jesus that preserved him to the end. May you and I entrust our lives to the Lord this day. I hope through these last few posts that the reader can see that it is worth fighting to know Jesus better,

Posted by mahlon at 9:13 AM No comments: