Jesus as the Son of God in the first three Gospels 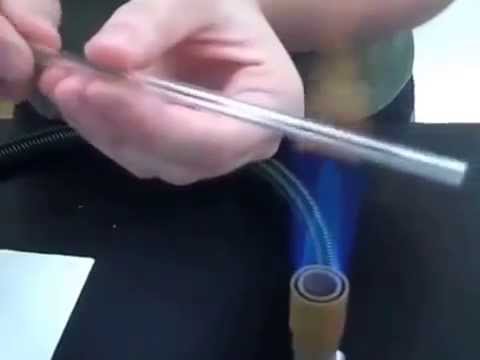 Matthew 4:3 "And the tempter came and said to Him, “If You are the Son of God, command that these stones become bread.”

Introduction: How the incarnation of the Son of God can be illustrated with a lesson from high school chemistry
Today's post begins an exploration into the significance of Jesus' title as "Son of God". I can recall in high school having a chemistry class. One of my favorite things to do in that class was to take glass tubes and shape and mold them in the flame of a bunsen burner. Much care had to be taken, since the glass could shatter if heated too quickly. Whenever the assignment went well, the effects of the heat brought in contact with the flame was a fascinating experience. As the glass began to heat, the flame and its heat would inhere in the glass, causing it to glow. The flame ever remained a flame and the glass test-tube ever remained a glass vessel - and yet the coming together yielded a glowing, light giving phenomena. What could not be done with the brittle, hard glass apart from the flame - namely bending and twisting - was suddenly possible as soon as the flame touched the glass. In like manner, taking that hot flame and trying to harness its heat and energy could not had been done - except through the flame's inherence within that glass test-tube. The end product - in the hand's of an expert and not a high school student like I was back in those days - resulted in a beautiful object. Heat, force and twisting were required to make an object that was unlike how it had been prior to the exposure of its structure to the flame.

Analogies and illustrations can break down, but the above little story can aid us in appreciating all that the Son of God went through in coming into this world. When God in the Person of the Son came into this world, the uncreated flame of His Deity was brought into contact with the fragile DNA of a virgin girl named Mary. The Divine chemist - the Holy Spirit - miraculously joined together true humanity and true deity - with the result being the Eternal Son coming through and born as the infant Jesus. Before it would be all said and done, the humanity of Jesus of Nazareth would be bent and twisted in His mission to come and save His people while all the while ever remaining that Eternal uncreated flame of Deity with the Father and the Spirit.

The incarnate Son of God is and forever will be the most supreme living Person of beauty - the centerpiece of scripture and eternity - the God-man. The eternal Son would in His incarnation learn what it was like to be an obedient Son as the historic Jesus of Nazareth (Hebrews 2:10; 5:9).

Exploring the title "Son of God" in the three Gospels of Matthew, Mark and Luke
In the above opening verse we find the first mention of this title in the New Testament. Without a doubt the term  "Son" is used of Jesus in the opening chapter of Matthew's Gospel with respect to His fulfillment of Isaiah 7:14 in Matthew 1:23 and as Mary's son according to the flesh in Matthew 1:18. As one encounters the additional words "of God" in Matthew 4:13 and many other places in the Gospels and remainder of the New Testament, there is indicated a unique relationship that the Person of the Son in His incarnation as Jesus of Nazareth had with respect to God.

What we want to do is survey key texts in the first three Gospels that use this title "Son of God" and what this title has to tell us about Jesus Christ. The first three Gospels together are called the "synoptic gospels", with the term "synoptic" meaning "seen together". Such a study can aid us in better understanding how the Person of the Son of God, eternally existing in the uncreated flame of Deity along with the Father and the Spirit, voluntarily chose to come and take unto His Person the frailty of humanity untainted by sin in the virgin-birth/conception (2 Corinthians 5:21; 1 Peter 2:22).

Matthew's Gospel and the title "Son of God"
As we already saw in the opening passage of Matthew 4:3, Satan is using this title to refer to Jesus in the course of His temptation (also see Matthew 4:6). In Matthew 8:29 we find demons speaking through a demoniac to Jesus in the following way: "And they cried out, saying, “What business do we have with each other, Son of God? Have You come here to torment us before the time?” To find this title in the words of Jesus' enemies is to actually find the first clue to the meaning of the title itself. Satan and the demonic realm used this title with reference to the authority and power of judgment possessed by Jesus as God-incarnate. In John 5:24-29 and Matthew 28:18 we find out that all authority on heaven and earth, as well as the power to judge at the end of all history had been granted by the Father to the Son. Thus we get the sense that this title "Son of God" is another way of describing Jesus as no less than "true Deity" revealed in "true humanity".

As Matthew's Gospel goes on we discover a second signification of the title "Son of God" - namely how Jesus is the Messiah of Israel. In Matthew 16:16 we read Peter confessing: "You are the Christ, the Son of the Living God". To be "the Christ" meant "the Chosen One" or "The Anointed One". Many passages in the Old Testament (such as Psalm 2, 89 & 110; Isaiah 49,51,53; Zechariah 12-14) speak of what would be a future human man who would be the Savior and champion of Israel. Moreover, this man would be invested with the Divine power and ministry of the Holy Spirit (Isaiah 61:1-2); will rule over the earth (Isaiah 11) upon the throne of David (Psalm 110) and have within and through Himself nothing less than God's very authority (Psalm 89).

Peter's confession in Matthew 16 is enormously important in connecting Jesus of Nazareth to the prophetic swath of Old Testament Messianic expectation. So with Matthew we gain a sense of Jesus "Heavenly origin" and "earthly mission".

Mark's Gospel and the title "Son of God"
Mark begins his Gospel with the title: "The beginning of the Gospel of the Son of God". Evidently whatever we see Jesus teaching and doing will express His life as the Pre-eternal Son in human flesh. In Mark 3:11 and 5:7 we find once again, like we saw in Matthew, demons crying out in fear at the sight of Jesus - thinking that the final judgment had came upon them. Towards the end of Mark 14:61-62 we find Jesus standing trial before the Jewish High Priest and the following exchange taking place: "But He kept silent and did not answer. Again the high priest was questioning Him, and saying to Him, “Are You the Christ, the Son of the Blessed One?” 62 And Jesus said, “I am; and you shall see the Son of Man sitting at the right hand of Power, and coming with the clouds of heaven.”

The High Priest's use of the title "Son of the Blessed One" is a euphemistic way of saying "Are you the Son of God"? The use of this title along with "Christ" and then Jesus' own use of another Divine title "Son of Man" zeroes in on the climactic revelation of Jesus Christ's heavenly origin and earthly mission - just as we saw in Matthew.

Luke's Gospel and the title "Son of God"
Whenever we factor in what we have learned thus far from Matthew and Mark about this title "Son of God", we can take that into our reading of Luke's usage. In the infancy narrative of Luke 1:32-35 we read - "He will be great and will be called the Son of the Most High; and the Lord God will give Him the throne of His father David; 33 and He will reign over the house of Jacob forever, and His kingdom will have no end.” 34 Mary said to the angel, “How can this be, since I am a virgin?”35 The angel answered and said to her, “The Holy Spirit will come upon you, and the power of the Most High will overshadow you; and for that reason the holy Child shall be called the Son of God."

Such an announcement tells us two important truths about the "Son of God" - first, that the Son of God describes the Son as He was prior to His incarnation and second, this Eternal identity would remain with Him after His incarnation. In Luke 9:35 we see the Father announcing from Heaven: "This is my beloved Son, in whom I'm well pleased, listen to Him!"

Whenever we tie in all of the previous insights from the other two Gospels, we discover that Christ's identity as Son of God is an eternal identification as He was within the Triune Godhead, and that the revelation of Him as "Son of God" is theological shorthand for saying that He is now "God in human flesh".  As the New Bible Dictionary, page 503, notes: "that the Son perfectly embodies all that is in the Father, or putting it negatively, that there is no aspect or constituient of Deity or character which the Father has and the Son lacks (2 Corinthians 4:4; Colossians 1:15; Philippians 2:6; Hebrews 1:3).

Closing thoughts:
Today we explored Jesus Christ as the Son of God and the significance of that title. We discovered that the first three Gospels of the New Testament, also called the "synoptic" or "seen-together" Gospels (due to their common literary and thematic inter-dependance and presentation of Jesus) speak frequently of Jesus as the Son of God. This important title tells us about Jesus' heavenly origin as the co-equal second Person of the Trinity along with the Father and the Holy Spirit. This title "Son of God" was also used to refer to His earthly mission as the Savior and as the chosen-one or Messiah.

Posted by mahlon at 9:16 AM No comments: