P1 Guard Yourself from Idols 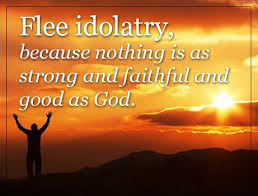 What is idolatry? Why is it so bad? What is the number one way to combat it?  These three questions can aid us in walking our way through the final little section of John's first epistle: 1 John 5:16-21.  In 1 John 5:21 we see in six words a simple command: Little children, guard yourselves from idols.  In today's post we will aim to answer that first question: what is idolatry?

The practice of idolatry, what most people think of when understanding idolatry
I am sure when you think of idols, you may envision someone carving out a block of wood or stone and bowing down to it.  Isaiah 44:12-18 describes the insane nature of such a practice: The ironsmith takes a cutting tool and works it over the coals. He fashions it with hammers and works it with his strong arm. He becomes hungry, and his strength fails; he drinks no water and is faint. 13The carpenter stretches a line; he marks it out with a pencil. He shapes it with planes and marks it with a compass. He shapes it into the figure of a man, with the beauty of a man, to dwell in a house. 14He cuts down cedars, or he chooses a cypress tree or an oak and lets it grow strong among the trees of the forest. He plants a cedar and the rain nourishes it. 15Then it becomes fuel for a man. He takes a part of it and warms himself; he kindles a fire and bakes bread. Also he makes a god and worships it; he makes it an idol and falls down before it. 16Half of it he burns in the fire. Over the half he eats meat; he roasts it and is satisfied. Also he warms himself and says, “Aha, I am warm, I have seen the fire!” 17And the rest of it he makes into a god, his idol, and falls down to it and worships it. He prays to it and says, “Deliver me, for you are my god!” (ESV)

Throughout the Old Testament God warned the people not to make any images or idols of created things. Exodus 20:4 states - “You shall not make for yourself a carved image, or any likeness of anything that is in heaven above, or that is in the earth beneath, or that is in the water under the earth."  We could look at other passages that deal with the practice of idolatry, however the warped sinful human heart will say: "that may had been idolatry in biblical times, or idolatry practiced by primitive cultures, but this is 21st century, and I don't see such practices being done today."  The practice of idolatry is where we can begin the discussion, however the practice derives from the heart, which is the true source of idolatry.

What is idolatry?
What is idolatry?  Jared Wilson, writing in the June 2012 issue of Table Talk magazine, writes this penetrating insight: "All sin is idolatry because every sin is an exercise in trust of something or someone other than the one true God to satisfy, fulfill, or bless. It is not difficult to see how violations of commandments two through ten are automatic violations of commandment one. This truth reveals that the hottest “worship war” going is the one taking place daily in the sanctuary of our own hearts. But we must wage this war because none of us is a bystander to idol worship."

Ouch!  We can be those who may not bow down before blocks of wood or stone, however we can still be guilty of committing idolatry.  The Apostle John still had the physical idolatries going on around him when he wrote 1 John, however he was striking at something far deeper.  Below are three texts that can aid us in getting to the definition of idolatry, and why it was John issued such a prohibition against it to end his letter:

1. Exalting yourself
1 Samuel 15:23 says - For rebellion is like the sin of divination, and arrogance like the evil of idolatry. Because you have rejected the word of the Lord, he has rejected you as king.”  King Saul had once again disobeyed God by subsituting his way of doing things with what God had spoken to Him through Samuel.  Samuel's judgment on Saul served to expose the idolatrous nature of his heart - arrogance, pride and self-sufficiency.  The scary thing about Saul's episode is that in form, he was offering sacrifices to the God of Israel at a publically organized event!  To the unsuspecting and unknowing observer, Saul's actions would had been deemed by many people to be commendable.   However Saul had disregarded Samuel's instructions and God's Word in favor of his own perferences and opinion - which is why he was reprimanded by the prophet.  Idolatry's issue is not only to do with the form of what we do, but moreso with the heart.  Dr. Adrian Rogers once noted that if the Devil can get you to do good things in the flesh: whether it be preaching, serving God or doing good things, then his diabolical sheme has been served.  For once I am doing good things in the flesh, the only thing left to do are the bad the things.  Doing anything in the flesh means I am choosing to exalt my own self-interest above God.  In short, Saul chose to exalt himself above God.

2. Exchanging God
A second text, Romans 1:22-23 states - "Claiming to be wise, they became fools, 23 and exchanged the glory of the immortal God for images resembling mortal man and birds and animals and creeping things."  There we see the second idea associated with a heart of idolatry - replacing or exchanging God.  The arrogant human heart believes it is more beneficial to replace God with a lesser, created thing than to bring glory to God by enjoying Him forever.  The definition of insanity is doing the same thing over and over again, the same exact way, but expecting different results.  The heart of idolatry is insane (both physically as illustrated in Isaiah 44 above and spiritually), because it believes it can gain infinite joy from finite or created things.  Whenever you exchange God, you end up with nothing.
3. Enthronement of comfort
Then a third verse, Colossians 3:5, gives us the clearest definition of all -  "Put to death, therefore, whatever belongs to your earthly nature: sexual immorality, impurity, lust, evil desires and greed, which is idolatry." God gave people drives to carry out His original design of them as individuals, human interractions and ultimately for His glory. Thus the drive for physical intimacy is perfectly normal and acceptable, providing it is expressed within the confines of marriage.  Eating food is a normal drive and quite acceptable, however left unchecked, can lead to gluttony and health issues.  The joy of financial compensation gained from wise investing or hard work is an understandable drive.  However what happens when the so-called "almighty dollar" truly becomes "the almighty dollar"?  All of our drives, when placed ahead of God and enthroned to serve our comforts, is the third component in defining idolatry. The great late Christian Scholar Dr. Francis Shaeffer once quipped that if we are not careful, we will fall victim to our own relentless pursuit of our own comfort and personal affluency.  In other words, in trying to keep up with the Jones', we can end up no being able to keep up - period.
Conclusion
In today's post we defined idolatry by three terms drawn from the scriptures: Exalting oneself, Exchanging God and Enthonement of comfort.  My prayer is that you and I will take heed to John's command to guard ourselves from idols.  In tomorrow's post we will consider the second of our three questions asked at the beginning of this post: Why is idolatry so bad? That may seem obvious, however idolatry is so powerful that if not rooted out and replaced by a complete focus on Jesus Christ, can dull our senses to its danger.

Posted by mahlon at 8:15 AM No comments: