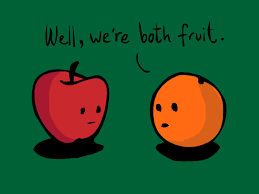 Premise#1 The rapture and 2nd advent have similar characteristics, meaning they're one event

Therefore: The rapture will occur at the end of the tribulation period.

A Pre-tribulationalist counter-response and alternative explanation of the above similarities
The problem with the above reasoning is in how I defined the word "similar".  Without going into long technicalities, the mistake I made was in saying "similar" means the "same". For instance, being from Pennsylvania, I can tell you first hand that though the Pittsburg Steelers and Philadelphia Eagles might be "similar" in that they are football teams, who are in the NFL and who are stationed in PA, nonetheless their similarities cease and the differences are far more numerous (ask any of their respective fans!) Similarity does not mean "sameness". Apples and oranges might very well be fruit, however they must be distinguished, since an apple is not an orange nor an orange an apple.

The reader is invited to come back tomorrow, where will look more at the differences between these two events, and how such comparisons aid in understanding the Bible's teaching on end-time events.