P2 How the Angels point us to Jesus Christ 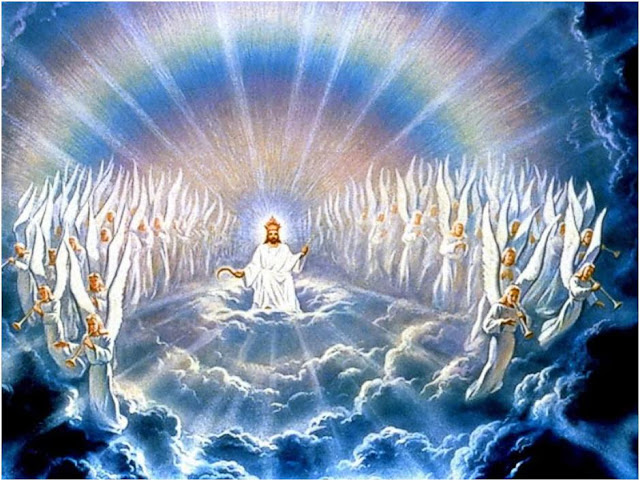 1 Timothy 3:16 "By common confession, great is the mystery of godliness: He who was revealed in the flesh, Was vindicated in the Spirit, Seen by angels, Proclaimed among the nations, Believed on in the world,
Taken up in glory."

Angels point to Jesus in His Ascension
Angels are seen throughout scripture announcing things to people. Notice again the function of angels both declaring an explaining in Acts 1:9-11 "And after He had said these things, He was lifted up while they were looking on, and a cloud received Him out of their sight. 10 And as they were gazing intently into the sky while He was going, behold, two men in white clothing stood beside them. 11 They also said, “Men of Galilee, why do you stand looking into the sky? This Jesus, who has been taken up from you into heaven, will come in just the same way as you have watched Him go into heaven.” The angels were doing what they were created to do: declare and explain the glory of God (Psalm 68:17) and the equal and shared glory of the Son (Luke 2:14).

Angels point to Jesus Who is coming again


The Old Testament makes it abundantly clear that the angels function in the capacity of a royal court demonstrating the Deity of Yahweh. In Job 38:7 and Psalm 104:1-4 we see the angels, from the inception of their creation, exalting God for His creative power. In Psalm 68:17 we see angels attending the giving of the law atop Mount Sinai, demonstrating before the newly redeemed Hebrew nation that uncontested Deity of Yahweh. Daniel 7:10-13 portrays the Lord, the Ancient of Days and the Pre-incarnate Son of Man in royal Deity, being attended by innumerable angelic hosts. Later on in Daniel 12:1-3 we see Michael the archangel attending what will undoubtedly be the Divine power of God Himself raising believers from the dead in the resurrection of the righteous and unbelievers in the later resurrection of the wicked.

When will these events occur? When Jesus appears in the clouds at His second coming. In Acts 1:11 the two angels told the disciples that the same Jesus who disappeared from their sight as God and man would appear in the same glorified and physical state. When Jesus returns in His second coming, He will be attended with the angelic hosts of Heaven reflecting His deity revealed through His physical humanity. (Matt 16:27; 25:31; Mark 8:38; Luke 9:26 & Revelation 15:8). Just like the Old Testament’s association of the angelic court with the display of God’s Deity, the New Testament connects those same courts of angels as pointing to Christ’s deity in His second coming.
Posted by mahlon at 9:26 AM 1 comment: