What elements are involved in the rapture's placement in prophetic events 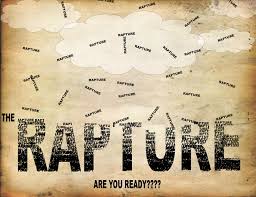 1 Thessalonians 4:16-17  "For the Lord Himself will descend from heaven with a shout, with the voice of the archangel and with the trumpet of God, and the dead in Christ will rise first. 17 Then we who are alive and remain will be caught up together with them in the clouds to meet the Lord in the air, and so we shall always be with the Lord."


In today's post we are interested in understanding what elements or events are typically considered when discerning the rapture's placement in the ordering of prophetic events. 1 Thessalonians 4:16-17 stands as the flagship passage on the rapture of the church.  Concerning the interpretive approaches to this teaching, the Evangelical Dictionary of Theology notes:
"The major divisions of interpretation of Paul's words center on the relationship of the time of the rapture to the tribulation period that marks the end of the age. Pre-tribulationalists teach that the church will be removed before the seven-year period that marks the end of the age."


A second group, the midtribulationalists, contend that the church will be raptured during the tribulation after the Anti-Christ's rise to power but before the severe judgments that prepare the way for Christ's return to establish his rule on earth.


Another approach to the problem is that of the posttribulationalists, who believe that the church will continue to exist in the world throughout the entire tribulation and be removed at the end of the period when Christ returns in power."1


The purpose of this post today is not so much to compare and evaluate each of those viewpoints (which will come in a future post). Rather the point of today's post is to explore what Bible scholars, teachers and pastors factor in when arriving at placing the rapture Pre (before the tribulation); Mid (half-way through the tribulation) and Post (near the end or at the end of the tribulation).


1. Premillennialism.
For those who champion either viewpoint, the common ground between all three perspectives is the belief in a literal 1,000 year reign of Christ as recorded in Revelation 20, as well as the teaching of His second advent occurring to set up such a kingdom.2

chart is from Bible.org


2. Duration of the Day of the Lord or God's outpouring of wrath
The phrase "day of the Lord" figures quite prominently in discussions surrounding the timing of the rapture, being that all are agreed that Christians will not be subject to God's wrath. (1 Thessalonians 1:10; 5:9). In passages such as Revelation 6-19 we see the unfurling of the title deed to planet earth by Jesus, wherein all the trumpet, seal and bowl judgments are taking place.  Though strictly speaking the rapture is not decisively mentioned in Revelation, other circumstances mentioned lead many scholars to offer up reasons for the rapture being a pre, mid or post-trib event.


3. The identity of the "tribulation martyrs" in Revelation 7 & 14
Among Pre and Post-tribulational people is the issue of identifying the believers who die in the tribulation period. Who are they? Pre-tribulationalists will argue that they are not the church, being that the text never calls them such.  Meanwhile Post-tribs will counter by saying that if the Holy Spirit was removed from the earth in a Pretrib rapture scenario, then how would people be experiencing conversion unto salvation. Such an issue factors into discerning where the Bible places the rapture in relationship to the tribulation period.


4. The relationship of the rapture to Christ's second advent
The issue as to whether there is a time delay between the rapture and the second advent will determine which of the above positions is believed. Pre and Mid-trib people see both events as distinguished, almost like a Part 1 and Part two of Christ's return.  Post-tribulationalists see both as composing one and the same event, with virtually no time delay whatsoever. The chart below, from Wikipedia.org visualizes this point: 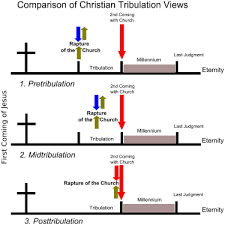 5. Interpretation of Daniel 9:23-27 or "Daniel's 70th week" and Matthew 24
All three viewpoints interact quite a bit with Daniel, whereas Mid and Post-tribulationalists see the rapture being spoken of in Matthew 24. Virtuallly all Pre-tribulationalists would say that the rapture is not discussed by Jesus in his sermon on the Mount of Olives in Matthew 24, being that his concern is exclusively with His second Advent, a distinct event from the rapture.

We could probably reference several more elements, however these five tend to be the top ones when reading any books, literature or hearing sermons on the rapture's placement in prophetic events.


2. Other schools of thought in regards to the term "1,000" years in Revelation 20 treat the chapter as referring to a symbolic period of time that is occurring right now in heaven and will culminate in Christ's second advent, a general final judgment of believers and unbelievers and then the eternal state of Revelation 21-22. Typically those who espouse Christ's millennial kingdom as occurring right now in heaven are deemed "Amillennial", being that they do not believe there to be a future, literal 1,000 year reign of Christ upon this earth.


A second version teaches that through the gradual evangelization of this world, multitudes of people from every nation will be won over by the Gospel, thus leading history into a "Gospel" golden age (a millennium of sorts). At the end of that undefined period, Christ will return and usher in the eternal state following the final judgment.  Such a view is call "post-millennialism". Amillennialists and Postmillennialist typically do not engage in the rapture debate, being that they do not view the tribulation as yet future, but rather having to do more with a general persecution of believers throughout the ages or as having occurred in the first century when the Romans destroyed the temple in Jerusalem.
Posted by mahlon at 7:22 AM No comments: