Reflections on Jesus Christ As "The Only-Begotten Son" 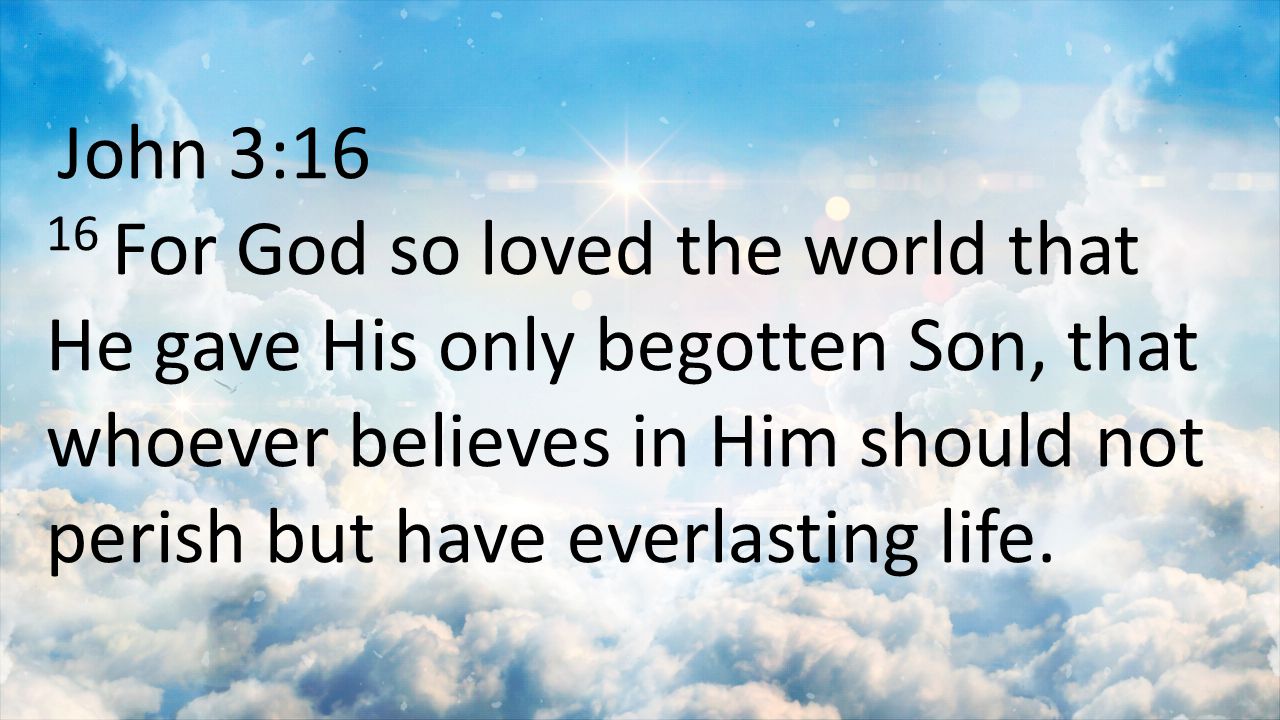 The opening verse in today's post is perhaps one of the most familiar and beloved passages in the Bible. Jesus Christ describes Himself in the third person. In John's rendering of Jesus' statement, we find the remarkable title for Jesus - the "only-begotten Son". Most modern translations apart from the King James and the New King James rendering above translate this Greek word as "one-and-only Son". Both are equally acceptable. However, the older rendering of "begotten" has a rich and long history in the the history of theological reflection. In today's post we are going to look briefly at this name of Jesus as "the only-begotten".

Thought much can be said pertaining to the meaning of this designation for Jesus, we will point out three main thoughts concerning the title or name "only-begotten". In doing this, we will explore the meanings and application of this name in better understanding the Person and work of Jesus Christ.

So, what is the significance of Jesus Christ being the Only-begotten Son of God?

To say that the Son possesses "eternality" simply means He is eternal. Whatever properties one assigns to God (i.e omniscience, omnipotence, omnipresence, omnibenevolence, self-existence, wisdom and so forth) can be assigned to the Person of the Son (with the same thing being said of the other two-persons of the Father and the Holy Spirit). Psalm 2:7 gives us a glimpse into the eternal pre-existence of the Son, wherein we read: "I will declare the decree: The Lord has said to Me,
‘You are My Son, Today I have begotten You".

David's use of this term "begotten" is expounded upon in Hebrews 1:5-8, which states concerning Christ's eternality: For to which of the angels did He ever say: “You are My Son, Today I have begotten You”? And again: “I will be to Him a Father, And He shall be to Me a Son”? 6 But when He again brings the firstborn into the world, He says: “Let all the angels of God worship Him.” 7 And of the angels He says: “Who makes His angels spirits And His ministers a flame of fire.” 8 But to the Son He says: “Your throne, O God, is forever and ever; A scepter of righteousness is the scepter of Your kingdom" (see also John 1:1).

The eternality of the Son is a fundamental truth in our understanding of Jesus Christ. Undoubtedly to say that He is the "only-begotten" Son means that He is eternal, but notice secondly...

2. Equality with the Father.

In the Apostle John's opening prologue or introduction to His Gospel, we find Jesus described in His pre-existence as "The Word". In John 1:2-3 we find the following description of the Son who is the Word: "He was in the beginning with God. 3 All things were made through Him, and without Him nothing was made that was made." As John continues on with this masterful introduction to Jesus in his Gospel, we find the same thought of the Son's co-equality with the Father expressed in the final verse of the prologue of John 1:1-18. It is in John 1:18 that we find our term "begotten" used: "No one has seen God at any time. The only begotten Son, who is in the bosom of the Father, He has declared Him."

The early Christians saw in this Biblical method of describing Jesus the development of not only His eternality, but also His co-equality with the Father. In meditating on the Son as having been "begotten" by the Father from all eternity, the early church fathers saw in the Bible a way to distinguish the Father and the Son.

"We believe in one God,
the Father almighty,
maker of heaven and earth,
of all things visible and invisible.
And in one Lord Jesus Christ,
the only Son of God,
begotten from the Father before all ages,
God from God,
Light from Light,
true God from true God,
begotten, not made;
of the same essence as the Father.
Through him all things were made."

As one studies further into the theological language used to describe Jesus the Son, the term "begotten" would come to distinguish Him in His co-equality yet distinction from the Father concerning His Deity, whilst the term "birth" would describe Jesus in terms of His humanity derived from the virgin Mary.

To "beget" someone refers to the begetter and begotten sharing the same properties and being in the same class, without particular focus so much on the beginning of the life of the one begotten. When we consider birth on the other hand, the beginning of one's life is front-loaded into the very definition of what it means to be "birthed". Hence, Jesus was "begotten" touching His Deity - which is to say - He is uncreated, just like the Father.

Another historic Christian creed, the Chalcedonian Creed of 451 A.D, states the following about the Son in the midst of its description of Him:

Walter Elwell, editor of the "Baker Encyclopedia of the Bible", includes the following article that comments on the significance of "only-begotten" as referring to the Son's equality with the Father:

So we've seen thus far that Jesus Christ as the "only-begotten" Son is with reference to His eternality and equality with the Father. However, there is a third important distinctive of this title...

3. Experiencing true humanity for your sake.

When Jesus was referring to Himself in the third Person in John 3:16, He was speaking of Himself as the "Incarnate" only-begotten Son. The first two-points of this post have emphasized how the Son is "the only-begotten" as He was from all eternity before His days in the flesh. However, when the Son came to be in the flesh, did He cease being "the only-begotten"? Clearly not! John 1:12-14 expressly says: "But as many as received Him, to them He gave the right to become children of God, to those who believe in His name: 13 who were born, not of blood, nor of the will of the flesh, nor of the will of man, but of God. 14 And the Word became flesh and dwelt among us, and we beheld His glory, the glory as of the only begotten of the Father, full of grace and truth."

Jesus of Nazareth the man was no less the Only Begotten in His Person than He was as the Eternal Word in His Person before the flesh. The incarnation of Jesus Christ did not diminish nor subtract His Deity. Instead, the Son added unto His "Person" the experience of what it means to be a true, genuine human being without sin. The center of Jesus' identity lies in His person-hood, with His two-natures each expressing that Person hood in their unique ways. The Apostle Peter in Acts 13:33 notes: "God has fulfilled this for us their children, in that He has raised up Jesus. As it is also written in the second Psalm: ‘You are My Son,

Today I have begotten You."

So why did the eternal, only-begotten Son become man? To answer this directly, it was for your sake and my sake. 1 John 4:9 has the following to say concerning how the "only-begotten" Son as man was for our sake: "In this the love of God was manifested toward us, that God has sent His only begotten Son into the world, that we might live through Him."

Today we have considered three significant meanings about the title attributed to the Son in both Old and New Testaments: "only-begotten"...

To think of all that Jesus did and is ought to shape our thinking and sculpt our hearts. We cannot exhaust Him. Such reflections upon the names of Jesus ought to cause us to bow our faces to the ground and worship Him!