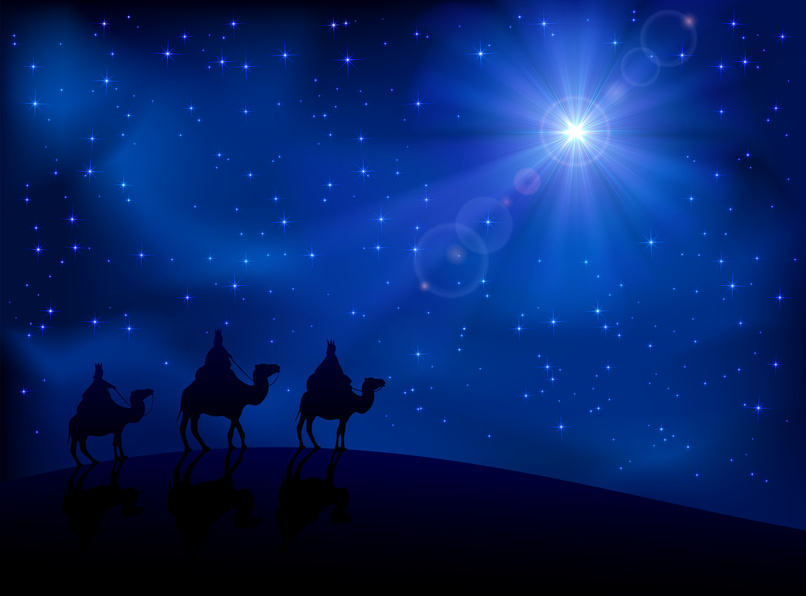 Matthew 2:2 “Where is He who has been born King of the Jews? For we saw His star in the east and have come to worship Him.”


Today's blog is going to attempt to deal with the question: "What was the star of Bethlehem?" In the literature on this intriguing topic, one will find three-types of explanations: purely natural, purely supernatural and a hybrid of the first two. Today's post is not claiming to have "the answer" to this mystery. Instead, the goal is to explore the various explanations of the Christmas star. At the end of this post, some final thoughts and applications will be offered that aid readers in applying the account of the Christmas star.

1. Some propose the star was a natural phenomenon.

Some have suggested that the celestial object witnessed by the Magi may had been a comet or a brightly exploding star called a supernova (Supernova 1987a, the last supernova that could be seen from earth, pictured below). Whenever a star like 1987a reaches the final stages of its stellar development, if it is of sufficient size and mass, compression of its various layers will have it convert its chemicals into a final core of molten iron. Supernova 1987a went through such a process (making it what is called in the literature a "type II" supernova).

Whenever the layers of the star cannot compress any further, a series of reactions lead to a violent explosion that results in the supernova exceeding its host galaxy in brightness for a relatively brief moment.

Supernovas are noticeable to keen observers. However, the way in which the "Christmas Star" moved and then hovered over Bethlehem would rule out this type of phenomena. Others have postulated that the Christmas star involved the alignment of certain planets to produce an extraordinary cosmic effect. Computer programs that can depict the appearance on the sky over any location on Earth at any date in history show some interesting results. Among those results are dates ranging in the the period of Jesus' birth (7 b.c to 2 b.c). Per such programs, the rare phenomenon of a triple planetary conjunction of three planets (Jupiter, Mars and Venus) is cited as a possible likely candidate for the "Christmas Star". A triple conjunction is pictured below:

Although such an event is noticeable, it still cannot explain the ability of the Christmas Star to remain stationary over Bethlehem. This model covers the movement of the given phenomenon across the sky. However, since it cannot remain still for long, it is likely not adequate to explain the Christmas star.

A final naturalistic candidate proposed for the "Christmas Star" is what is called a "nova". A nova is a variable star that varies its brightness or "luminosity" over time. Such a star can suddenly become bright and then dim to near invisibility. This model might be the most plausible of the naturalistic models, since it could have been over Bethlehem and "brightened-up" at just the right moment and then dim once the infant Christ was discovered by the wise-men. Still, since nova stars can repeat their cycles, the uniqueness of the "Christmas star" is diminished.

Could these astronomical phenomena been used by God in guiding these wisemen? It would seem that as suggestive as any of these models might be, they are not adequate to explain the events of Matthew 2. The object in question, according to Matthew's record, "guided them" and then "stayed" over the spot where Jesus and his family were living.

2. Some propose the star was a supernatural phenomena

If naturalistic explanations cannot adequately explain what the wisemen saw in Matthew 2, perhaps a series of "supernatural explanations" will suffice.

In the Bible we find examples of various appearances of God in what theologians call "theophanies". Many point back to the times when the people of God were led through the wilderness by "a pillar of fire" by night. Could the "star" that led the wisemen been a form of the "pillar-of-fire" theophany described in Exodus and Numbers. Although we cannot dispute the supernatural origin of this star, it is unlikely to be the famed "pillar of fire". Such a theophany would have been noticed by all in Bethlehem. The text describes that the star was only noticed by the keen eyes of the wisemen.

When one does a word study for that word "stand" in Matthew 2:9, we discover that the star not only just "stood over" the place of Christ's dwelling, it "stationed, positioned itself". This tells us that the object in question had some level of intelligence (perhaps an angel for instance). Angels appear some twenty times in the four Gospels during the life of Christ - thus making this a plausible candidate. Angels do of course appear in the Christmas accounts. However, the star in Matthew 2 does not speak, approach the wisemen nor interact with the environment as angels do throughout the Gospel records. The only issue with this view is that like the completely natural explanation, we don't have enough information to make a judgment on what exactly the star was.

Although a purely supernatural view is more probable than a purely naturalistic explanation, the reader is still left with an inadequate explanation of the Christmas star.

3. It is most-likely that the star was both natural and supernatural.

If we take both the natural and supernatural explanations together, we can say that whatever the Magi saw that night entailed God communicating through both the night sky and the supernatural realm. God in His providence or governance of history and the supernatural realm orchestrated this event. In a past blog I demonstrated how the prophet Daniel, over 600 years prior to the Magi in Matthew 2, had injected the prophecies of the Messiah into the thought life of these Persian Astrologers ( http://www.growingchristianresources.com/2011/12/where-did-magi-come-from.html ).
If we take into consideration the combination of Old Testament scripture and the cosmic events in the night sky - we can at least propose an event that was a hybrid natural and supernatural event.

If you look at Matthew 2:5 once again, the quotation of Micah 5:2 helps us to arrive at an explanation. We read in Matthew's text:

"They said to him, 'In Bethlehem of Judea; for this is what has been written by the prophet: 6 ‘And you, Bethlehem, land of Judah, Are by no means least among the leaders of Judah; For out of you shall come forth a Ruler Who will shepherd My people Israel.’”

Matthew's text includes the fulfillment of a prophecy which represents God's special revelation of His will in the Old Testament. Theologians have noted that God communicates to human beings in two ways: General Revelation and Special Revelation.

General Revelation is the witness of God that we have in creation and the conscience. It proves His existence and our responsibility to Him, but it does not identify Who He is nor does it lead to salvation. This is where we need "Special Revelation" from the scriptures to fill in what is needed to lead a person to saving faith in Jesus Christ.

When you scan the account of the Magi in Matthew 2:6, they do quote the prophecy in Numbers 24:17 concerning a star arising out of the tribe of Judah in Jerusalem. This suggests to us that they were operating on what they first detected from General revelation - the positions of certain things in the sky (as wells as some type of supernatural phenomena). The wisemen followed this "star" for some 800 miles from where they lived, journeying for two years to arrive at the location of the Christ-child.

With the Magi already possessing ancient copies of the Jewish scriptures handed down through their number from the days of Daniel, God at that moment used a particular text in His special revelation to persuade them to worship the Christ child. We must remember what they ultimately sought and the only proper response.

Although we could offer a specific plausible scenario for what the Magi saw in the night skies over Babylonia and Bethlehem - one thing is sure - the star in question was a Divinely given natural/supernatural phenomenon. God is responsible for what transpired and certainly utilized both the general revelation of the cosmos and the specifics of fulfilled prophecy to produce an event that guided the wisemen. The mystery of the Christmas star complements the "Mystery of Godliness" revealed that night (compare 1 Timothy 3:15-16). The goal of the Christmas star was to point to the Christ-child who was God in human flesh - the Lord Jesus Christ.

By the time these men reached Him, the Spirit of God, through the scriptures, had convinced them that this was the One they sought. They worshiped Him, and then went away exceedingly glad. May that be our response to Christ throughout this season and the rest of our lives: worship and exceeding joy.
Posted by mahlon at 7:54 AM No comments:

Email ThisBlogThis!Share to TwitterShare to FacebookShare to Pinterest
Labels: Are you ready for Christmas?
Newer Posts Older Posts Home
Subscribe to: Posts (Atom)