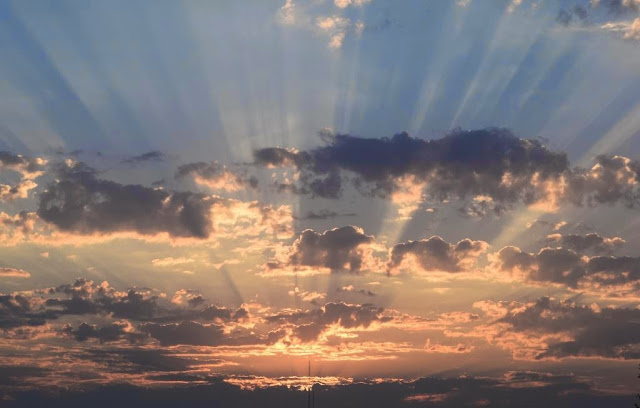 Today we aim to finish out our series on what the Christian "has" with respect to living the Christian life. We will look at the fact the the Christian has a fourth important resource for living a life for God in this world, namely the promise of a heavenly home.

The nasty here-and-now and the sweet-by-and-by
The first three resources have to do with living the life of faith in this world. With that noted, what else does the Christian "have". The Christian life is undoubtedly lived out in this world, yet, it is not just about this world. There is a world beyond this world that presses in on the Christian. The Old Testament prophets often spoke about the Heaven, eternity and the destiny of believers in faint outlines. When Jesus came on the scene, the reality of Heaven was brought to bear and the tangibility of such an "other-worldly" reality was shown to had "broken-into" our world by the coming of Jesus. The New Testament letters grant us even further exposition on the realities and glories of Heaven, with the Book of Revelation devoting entire chapters on the subject.

When it comes to the subject of eternity, we find in the Christian a seed of hope that cause one to pine for the world-to-come. The late Dr. Adrian Rogers once remarked that the Christian life is not only about life in the sweet-by-and-by, but also about the nasty-here-and-now. Undeniably, the Apostle Paul is keenly aware of the "nasty-here-and-now" in 2 Corinthians 4:2-12. He switches gears and writes about the reality of the Christian's heavenly home driving them onward towards godly-living. In 2 Corinthians 4:13-18 we find the leverage of his argument for our heavenly home, with 2 Corinthians 4:17 being the fulcrum: "For momentary, light affliction is producing for us an eternal weight of glory far beyond all comparison." This reference to the "sweet-by-and-by" contrasts with the present hardships. According to the Apostle Paul, the believer's heavenly home is without compare.

What the New Testament has to say about the Christian's heavenly home
We know from other scriptures that the concept of Heaven being likened unto a city is found throughout the Biblical authors. According to Hebrews 11:9-10, Abraham the patriarch had been in search of it through faith. We as Christians are already designated a citizens of the heavenly Jerusalem above (Galatians 4:26; Philippians 3:20). Presumably these references are talking about the "third heaven" where believers in the Lord go when they die in Jesus (2 Corinthians 5:5-6; 12:4).

The scriptures speak also of what will be a "New Heavens and a New Earth" (1 Peter 3:13). Jesus then told his disciples in John 14:1-3 that He is going away to "prepare a place" which we can presume to be the grand city described in Revelation 21 and 22. The whole point of Revelation 21-22 is to demonstrate that God in Christ with His people will come to tabernacle, and thus Heaven will characterize earth and earth's physical nature will characterize Heaven in the Eternal glory of those chapters.

A quick tour of the New Jerusalem
The place we call "Heaven" right now will no doubt be glorious. However, whenever we think of the New Heavens and Earth being prepared for by the Savior, we find a reality that will be even better than the current place called Heaven. We first of all note it is a Heavenly city (Revelation 21:10-11). This is most likely the same city spoken of by Jesus in John 14:1-3.

As a heavenly city, it is secondly a costly city, composed of solid diamond gemstones (Revelation 21:12) and other costly materials such as gems and transparent gold (21:15-20).

Thirdly it is a promised city, as seen by the names of the patriarchs and apostles inscribed on its gates and foundations (Revelation 21:13-14).

The fourth thing we can note about this city is its size: 1500 miles in each direction, with the same length characterizing its height. Quite literally this is a cube that is the size of North America or most of Europe. The height of this city has led many sound interpreters to conclude that the city may be composed of multiple stories and levels. To wonder if there would be enough space to live, some rough calculations yield that if the New Jerusalem, with all of its levels being a mile of distance from top to bottom (and this 1500 levels high) had tracts of space laid out for 8 billion people, each person would easily have 250 acres! What we must realize of course is that God is a big God and that the whole point of large proportions in any of His creations is to display His glory (Compare Psalm 19:1-6).

So in being a heavenly, costly and promised city that is quite grand in scope, we can notice yet another trait, fifthly that this city is a God-centered city (21:22-25). In as much as its studded gemstones and unfathomable beauty describe the New Jerusalem, without God as the light and the Lamb as the light, this city would never shine, would never be precious and would never be grand.

We can note yet another trait, number six, that this city will be a life giving city (22:1-5). Notice how this city has a healing tree, a river of life and unending light.

So let us quickly review what we have noticed thus far about the New Jerusalem described in Revelation 21:9-22:5

Why our heavenly home is cause for living the Christian life in this world
The New Testament visions of the believer's future heavenly home spark a rich desire to live for God in the here and now. Paul writes in 2 Corinthians 4:18 "while we look not at the things which are seen, but at the things which are not seen; for the things which are seen are temporal, but the things which are not seen are eternal." Christians are a people that are ever pulled in two directions. The "outer-man" in these verses tugs our soul into this reality, this world. We often find ourselves tethered to making a living so as to nearly forget what life's meaning is all about. We are decaying and fading away. The other direction is the pull of the "inner-man" in these passages. The realities of eternity burn ever-brighter in the spirit of a man. Caught in the middle of this ongoing tug-of-war is our soul - the seat of personality, emotions, mind and choices.

To know that as a Christian, I have a heavenly home, drives me onward to live for God. I find in these verses the supreme explanation as to why one must endure the hardships of life as a Christian. God is fitting us for eternity. Would it be that the believer's heavenly home lead their gaze of faith to point upward to Jesus.

Closing thoughts
These last several days have been devoted to exploring what the Christian "has" to live the Christian life. We've noted four main truths from 2 Corinthians 3-4:

1. Position with God
2. Power to live for God
3. Person of Jesus Christ
4. Promise of a heavenly home

Posted by mahlon at 7:08 AM No comments: