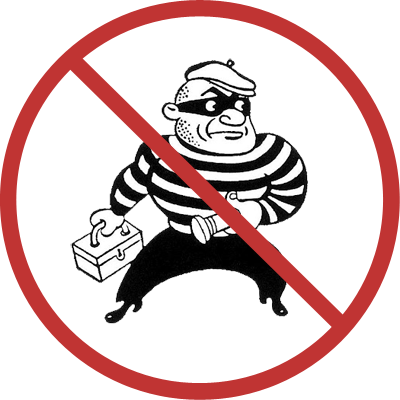 To further carry forth this point, the Gospel deals with how sinful man is reconciled and made right with Holy God of Eternity. The way the Gospel prescribes for this to occur is by grace alone (Ephesians 2:8) through faith alone (Ephesians 2:9; Romans 10:9-10) in Christ alone (Acts 4:12; John 14:6).

When we consider the two thieves on either side of the Gospel of Jesus Christ, we are talking about the two extremes in which sinful man conceives of salvation: legalism and lawlessness. On the surface, both thieves might seem completely different, since the former advocates good works as the basis for attaining favor with God while the latter abandons the need for good works. However, both thieves have in common a gross perversion of grace. Both thieves attempt to achieve reconciliation with God apart from His saving grace and the Gospel! To see how this is the case, we will look briefly at these two thieves in closer detail.

The thief of lawlessness

The first thief is that of license or lawlessness. Paul expresses the absurdity of this first thief in Romans 6:1-2 "What shall we say then? Are we to continue in sin so that grace may increase? 2 May it never be! How shall we who died to sin still live in it?" There are some today who will teach that as long as someone says some type of prayer to Jesus, it doesn't matter how one lives after such a so-called profession of faith. Afterall, it is God's job to forgive.

Such a thief mocks the true Gospel like the first thief did Jesus. The Gospel of lawlessness is no Gospel, but a perversion of it. Whenever Paul is recounting his preaching of the true Gospel in Galatians 2:9-10, he reminds his readers of the importance of good-works following after saving faith - "And when James, Cephas, and John, who seemed to be pillars, perceived the grace that was given unto me, they gave to me and Barnabas the right hands of fellowship; that we should go unto the heathen, and they unto the circumcision.10 They only asked us to remember the poor—the very thing I also was eager to do."

The same James of whom Paul speaks in this verse warned of the first thief of a faith that has no works following in James 2:14-16  "What use is it, my brethren, if someone says he has faith but he has no works? Can that faith save him? 15 If a brother or sister is without clothing and in need of daily food,16 and one of you says to them, “Go in peace, be warmed and be filled,” and yet you do not give them what is necessary for theirbody, what use is that?" So Paul laid to rest the charge that he was promoting some sort of salvation that required no change following saving faith.

The thief of legalism

The second thief on the other side of the Gospel is perhaps even more subtle and more dangerous than the first. It is the so-called Gospel of law or legalism. Such an approach attempts to preach salvation by works. This thief is the more seductive, more cunning of the two, since it is dressed in the garments of religion and ritual.

Whenever Paul was writing Galatians 2, he was dealing with this second thief of the Gospel. A group of Jews called the "Judiaizers" were attempting to convince Paul's readers that in order to be justified or made right with God, one had to be circumcised. They mixed together faith and the added works of circumcision and adherence to the Mosaic Law. Furthermore, this particularly heresy of works-righteousness proved to be so seductive that otherwise strong preachers of the true Gospel like Peter and Barnabas were beginning to compromise (see Galatians 2:13).

The historic doctrine of justification by faith alone argues that faith is not only necessary, but sufficient for reception of God's saving grace and Christ's credited righteousness. Whenever one adds faith plus baptism or faith plus some type of ritual to the mix, the result is still the same - no salvation. Paul plainly asserts in Galatians 2:16 "Knowing that a man is not justified by the works of the law, but by the faith of Jesus Christ, even we have believed in Jesus Christ, that we might be justified by the faith of Christ, and not by the works of the law: for by the works of the law shall no flesh be justified." As you read on down through Paul's main point regarding the true Gospel of the cross, he states in Galatians 2:17-21 "But if, while we seek to be justified by Christ, we ourselves also are found sinners, is therefore Christ the minister of sin? God forbid. 18 For if I build again the things which I destroyed, I make myself a transgressor. 19 For I through the law am dead to the law, that I might live unto God. 20 I am crucified with Christ: nevertheless I live; yet not I, but Christ liveth in me: and the life which I now live in the flesh I live by the faith of the Son of God, who loved me, and gave himself for me. 21 I do not frustrate the grace of God: for if righteousness come by the law, then Christ is dead in vain."

The true Gospel rather than the two thieves