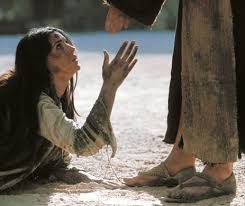 Matthew 28:6 He is not here, for He has risen, just as He said. Come, see the place where He was lying.

Yesterday we began taking a look ay Mary Magdalene - a mourner turned into a missionary.  Her story is part of what may end up being a larger series of posts dealing with how Jesus' post-resurrection appearances changed the lives of his followers and how that same resurrection power changes lives today.  We have noted the following elements that occur in each post-resurrection encounter with the risen Savior:

With regards to Mary Magdalene, we sketched out her journey of disciple with Jesus - noting how His exorcism of demons from her most likely marked the point of her conversion and following of Him.  We then saw how her discipleship led her to witness her Savior on the cross - and how such a traumatic event led to her desparate condition of mourning.  We ended yesterday with Mary weeping at the opening of the empty tomb.  In today's post we want to continue on and eventually notice two other elements that led this mourner to become a missionary, namely Mary Magdalene's direct encounter with the risen Christ and her dramatic change as a result of seeing the post-resurrected Jesus.

Mary Magdalene's desparate situation of mourning
The one detail of Mary Magdalene that is emphasized in the Gospel's portrayal of her in relationship to the resurrection account is the intense grief she was experiencing. The details of the three days experienced by Mary Magdalene in seeing her Lord crucified and then risen can explain why she became desparately overcome by grief:

Day One: 3 hours before sundown on Friday
1). Mary Magdalene was among the women who followed Jesus through his trials and ultimately were present at the foot of the cross during His execution. (Matthew 27:55-56)

2). Mary Magdalene and the women followed Joseph of Arimethea and Nicodemas to the borrowed tomb and witnessed where Jesus' linen wrapped body was laid and interred with the stone rolled to close the opening. (Luke 23:55)

Day Two: Sundown to sunrise, Saturday
1). Mary Magdalene and the women went to get spices to anoint Jesus' body and chose to rest in keeping with the Saturday Sabbath of the Jews. (Luke 23:56)

2). The Chief priests and the Pharisees in collusion with Pilate stationed guards at the entry way of the tomb and sealed it, remembering Jesus' words that He would rise on the third day.  I find it interesting that Jesus' enemies remember His words and yet prior to Jesus' resurrection we see no evidence of the disciples (among the women or men) recalling Jesus' words.

Day Three: early Sunday morning, sunrise
1). Matthew 28:1 and Mark 16:1 both record Mary Magdalene and the women traveling to the tomb to anoint Jesus' body.  Having been resting on the Sabbath, they did not know of the soldiers having been stationed at the tomb

2). While they were on their way, God sent an angel to roll back the stone, causing the guards to become as dead men and thus providing providential protection for the women who would end up seeing the empty tomb. (Matthew 28:2-4

3). We know mary Magdalene was overcome  by grief, for despite other angels appearing to them to explain Jesus' resurrection, and even the fact of the women remembering Jesus' prediction of His resurrection, Mary Magdalene's grief prevented her from processing the complete truth. (Luke 24:1-8) John MacArthur explains: "Meanwhile, Mary Magdalene, overwrought with the new grief of thinking someone had stolen the body, remained outside the tomb alone." 1

By realizing what Mary Magdalene had experienced in a span of less than 72 hours, undoubtedly her desparate condition could be characterized by one word - mourning. Despite the best attempts of even the angels assigned by God - no efforts could soothe her broken heart and dry her oceans of tears. Thankfully - she would not remain that way for long.

John 20:11 records the scene - "But Mary was standing outside the tomb weeping; and so, as she wept, she stooped and looked into the tomb." The Greek word translated "weeping" is a very powerful word - described by Henry Thayer as "to weep audibly, to cry as a child, to give verbal expression to grief". 2 As you go down through the remainder of John 20:11-18 and witness Mary's direct encounter with the risen Jesus, you will find two more references to her weeping - one with an angel addressing her.  This was her desparate situation.

However watch what happens as Jesus encounters her:

1). John 20:13-15 "And they said to her, “Woman, why are you weeping?” She said to them, “Because they have taken away my Lord, and I do not know where they have laid Him.” 14"When she had said this, she turned around and saw Jesus standing there, and did not know that it was Jesus.15 Jesus said to her, “Woman, why are you weeping? Whom are you seeking?” Supposing Him to be the gardener, she said to Him, “Sir, if you have carried Him away, tell me where you have laid Him, and I will take Him away.”

Before Jesus had spoken, she could not hardly bear to look at the one she thought was the gardner.  However as soon as He called her name - she could not bear the thought of letting Him go. She clung tightly to the hem of his garment.  He in His post-resurrection glory conveyed to her hope amist hopelessness and joy in place of despair.

Mark 16:9-11 records the disciples initial response to her words - "Now after He had risen early on the first day of the week, He first appeared to Mary Magdalene, from whom He had cast out seven demons. 10 She went and reported to those who had been with Him, while they were mourning and weeping. 11 When they heard that He was alive and had been seen by her, they refused to believe it." Mark 16:14 records then how Jesus would appear to the disciples to rebuke them for their unbelief. Thankfully though by the time we arrive at the end of John 20, we find all of the disciples believing truth of Jesus' resurrection - caused no doubt by his two other appearances to them in John's account, as well as an individual one to Peter to reinforce Him in His faith as recorded in 1 Corinthians 15:5.

Mary Magdalene's direct encounter by the risen Savior resulted in her going from being a mourner to a missionary.  Truly such an account is awesome and amazing to behold and read.  So then, what life applications can we draw from her life? What relationship, if any, does Jesus' post-resurrection power have to do with you today? Tomorrow we will answer those questions.

3. Now John in the Holy Spirit inspired recollection takes the pains to record the next words of exchange between Mary and Jesus in what would had been their native tongue - Aramaic.  Greek was the common language of the Empire and the language the original text of John's Gospel, however Aramaic was the language of Galilee and Judea where Jesus and His disciples would had treaded up and down those dusty roads. I'm certain that when Jesus spoke her name in Aramaic "Miraim", it would had been spoken as He did when He had delivered her from the seven demons in their very first meeting. (Mark 16:9; Luke 8:2)

4. The word ("angello"), translated "announce", was used in the ancient world to describe how a messenger would run into a city to announce a victory against an opponent.  Closely akin to this word is the word we translate "Gospel" ("euangello") which has within it the same root word as we find here in our text (the word "angello"). You may recognize the word as being the same root for those beings we call "angels".
Posted by mahlon at 7:20 AM No comments: