The How & Why you should study the scripture 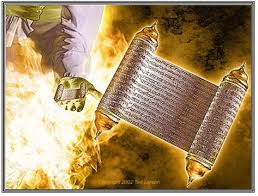 Revelation 10:1 "I saw another strong angel coming down out of heaven, clothed with a cloud; and the rainbow was upon his head, and his face was like the sun, and his feet like pillars of fire."

Introduction:
In Revelation 4-11 we see a visionary sequence that is concerned with answering the main question: "How will Jesus conquer the world?" The scene begins in heaven with scenes depicting the Father and the Spirit (Revelation 4) and the Father and the Lamb (Revelation 5). The Lamb takes from the Father's right hand the title deed to planet earth and demonstrates that He is worthy to break open its seals that will unleash the sequence of seal judgments (Revelation 6-7) and trumpet judgments (Revelation 8-11) that will run their course through the future tribulation period. In looking at this entire set of chapters, we can note three ways in which Jesus will conquer the world: the tribulation period (6-7), power of prayer (8:1-5) and the power of the Word (8:6-11:19). In today's post we want to focus particular on the Word of God, being that it will be through its fulfillment that Jesus will come back and conquer all the kingdoms of this world. (Revelation 11:15-19)1

As I thought on this truth of Jesus' use of the power of the Word in the fulfillment of His second coming, the thought came that we as God's people ought to be as much in the Word as possible. We ought to know the Word by knowing how to use it and why, being that Jesus Christ will be using His word to bring about His conquering victory over the world at His return. In this post today we will focus our attention on two main thoughts as we work our way through Revelation 10-11:

How do you study the Bible?
Whenever you approach a text like Revelation 10-11, it is important to have a few Bible study tools at hand so as to extract the right meaning and application to your life.  The following tools are useful in any part of the Bible you may find yourself reading and studying.

1. Cross Referencing
Perhaps out of all the Bible study tools, none is more important nor effective than cross referencing.  The older name for this practice is what Bible teachers call "the analogy of faith" or "comparing scripture with scripture".  Cross referencing can oftentimes unlock the mysteries of faith and the scripture.  Whenever  we come to Revelation 10, the immediate issue at hand concerns the identity of the "strong angel" in Revelation 10 and "the two witnesses" in Revelation 11.

In Revelation 10:1 we read: "I saw another strong angel coming down out of heaven, clothed with a cloud; and the rainbow was upon his head, and his face was like the sun, and his feet like pillars of fire".  In most reference Bibles you will see small cross references either printed in the margin or in the center column. In the one reference Bible I'm using, the following scriptures are given that correspond to Revelation 10:1 - Revelation 5:2; 18:1 & 20:1. In those passages we see reference to some sort of mighty strong angel that has a strong voice (5:2); illuminates the earth (18:1) and having the ability to bind satan himself with a chain, casting him into the Abyss for 1,000 years (20:1). Noting these references aids greatly in identifying the "great angel" in Revelation 10.  Some commentators have identified the "angel" of Revelation 10 as perhaps a reference to Jesus Himself.  However when you consider how Revelation 10:1 is explained by the other references in Revelation, the meaning of the passage is made plain and clear.

The second mystery to solve has to do with the identity of the two witnesses of Revelation 11:3. Though we are not told their names, their actions appear to tip the reader off to their possible identity.  In Revelation 11:5 we see both of them having the ability to call down fire from heaven. Only two men in the entire Bible were associated with such activity: Moses (Numbers 16:35) and Elijah (2 Kings 1:10-12). We also see in Revelation 11:6 reference to further activities associated with both these men: the power to prevent rain, associated with Elijah (1 Kings 17:1) and turning water into blood being connected to Moses (Exodus 7:14-25). Thirdly we know that Jesus in his first coming actually met with both of these men on the top of the Mount of Transfiguration.  Matthew 17:3 records - "And behold, Moses and Elijah appeared to them, talking with Him." Fourthly we know that both witnesses will be given the ability to prophesy in Revelation 11:3.  Moses and Elijah of course were prophets.  Such observations can only come as one compares scripture with scripture in cross referencing. Such activity enables the Christian to cultivate the ability to hear God's voice speaking in the scripture.

2. Repeated Ideas/words
In this Bible study tool we are interested in noting the one or several main words/ideas running through the passage.  In combining what we've observed in our cross references, we can being to interpret the scripture.  Several details could be pointed out in these chapters, but the one main idea that threads its way through these verses is the subject of God's word.  Clearly John is concerned in showing how Jesus is going to conquer the world through His fulfillment of scripture. Note the following verses that either mention or feature the word of God: Revelation 10:2,4,8,9,10; 11:3,7. Whenever you see the Word of God repeated that many times, you are able to see the main point of the passage: Jesus is going to use the power of the Word of God in His overall program to conquer the kingdoms of this world.  Further cross-referencing reveals that Revelation 10:9-10 matches with passages such as Ezekiel 3:3 and Jeremiah 15:16, both of which depict prophets "eating" or "taking in" the scripture.  If anything, we need to be taking in the scripture and understanding it.  Revelation 1:3 reminds the reader: "Blessed is he who reads and those who hear the words of the prophecy, and heed the things which are written in it; for the time is near."

3. Six Questions
We can utilize this third tool that causes the reader to interact with the Bible like a real person.  The six questions are: who? what? why? where? when? & how?

-Who is the strong angel? An angelic emissary delegated by God to execute his judgments prior to Jesus' second coming.

-What are the angel and the witnesses doing in these chapters? They both are testifying to a watching world of the Sovereignty of the Father and preparing the way for the second coming of the Son.

-Why are these chapters important in John's overall argument in Revelation? To remind the reader that it is Jesus Christ, not the Anti-Christ nor the world-system that will determine the course of history. It is God's Word, not man's opinion that will have the final say in all matters of time and eternity.

-Where is the action taking place? On earth
-When is the timing of all these events?
During the latter half of the seven year tribulation period.  We know this by virtue of the length of time given for the two witness (presumably Moses and Elijah) to do their ministry (1260 days = 3 1/2 years).  Such a time period corresponds to the 3 1/2 years of Daniel 9:26b-27 and Jesus' reference to the latter half being called "The Great Tribulation" in Matthew 24:21.

-How will it all end?
Revelation 11:15 states - “The kingdom of the world has become the kingdom of our Lord and of HisChrist; and He will reign forever and ever.”

So knowing how to study the Bible gets you into the very tool Jesus will use and fulfill when He comes back to conquer this world.  Knowing His will and plan will enable you as a Christian to get involved in what he is doing and wanting to do.  However there is one more question to answer in this post today: Why study the Bible?

Why Study the Bible?
We could certainly answer this question by gleaning from the above observation and Bible study tools.  However I want us to understand what Revelation 10-11 have to reveal to us about the nature of the Word of God itself.  The nature of something determines what value and effort we put into it.  What kind of book is the Bible and why should you study it? Let me give you six brief words and definitions about the Bible from Revelation 10:11, the Bible is....

4. Sufficient = Enough to comfort or convict to spiritual change. Revelation 10:9-10

5. Authority = to transmit the purpose and power of God among His people, in the world and over the conscience. 11:3

6. All about Jesus = The scriptures point to Jesus.

Conclusion:
As we close out today's post, I want to end with this insight from noted theologian J.I. Packer concerning the importance of God's Word and everything we have looked at today: "Only truth can be authoritative; only an inerrant Bible can be used in the way that God means scripture to be used. Its text is word for word God-given; its message is an organic unity. The infallible word of an infallible God, a web of revealed truths centered on Jesus Christ."2
Endnotes:
1. Let the reader note that in the book of Revelation we often see John presenting the same general time period or sequence of events in a repetitive fashion.  This feature of Revelation is what scholars call "recapitualation", meaning that the same material is repeated again and again but in ever increasing detail and intensity. Revelation 4-11 covers the final half if not the entire seven year tribulation period.  The next visionary sequence, Revelation 12-14, covers the same time period except the emphasis shifts from history to the rising and defeat of Anti-Christ.  Revelation 15:1-19:10 covers the same time  period yet once more, with the focus switching to the religious, economic and political infrastructure of prophetic Babylon that will fall at the end of the tribulation period at Christ's return. In all we see the tribulation period surveyed three times in three layered cycles from Revelation 6:1-19:10.

Posted by mahlon at 8:30 AM No comments: