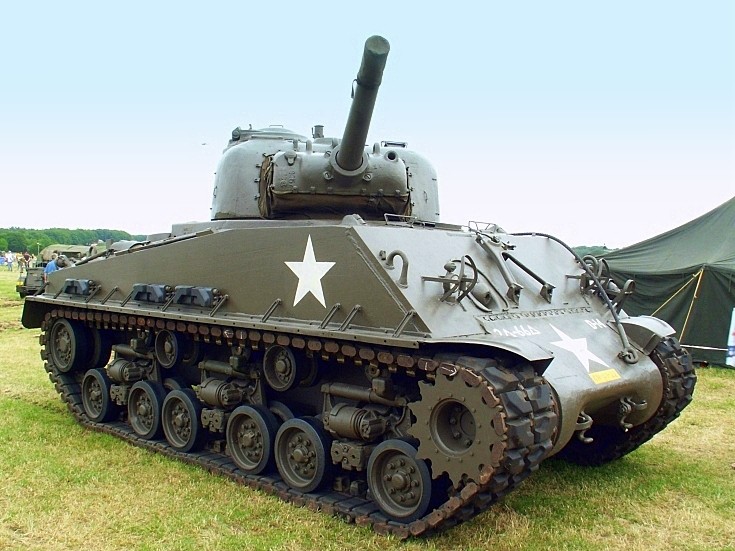 Luke 4:1-3 "Jesus, full of the Holy Spirit, returned from the Jordan and was led around by the Spirit in the wilderness 2 for forty days, being tempted by the devil. And He ate nothing during those days, and when they had ended, He became hungry. 3 And the devil said to Him, “If You are the Son of God, tell this stone to become bread.”

Introduction:
How did Jesus approach to spiritual warfare? Well - obviously - it wasn't with a tank like the one pictured above. In both Luke and Mark's Gospel accounts of His temptation in the wilderness, Jesus went into that scene being both filled with the Holy Spirit and filled with the Word. Luke describes Jesus as being "filled with the Holy Spirit" and Mark elaborates on how Jesus was "impelled". For sake of completeness, Matthew's parallel states in Matthew 4:1 that Jesus was "led up by the Spirit into the wilderness." In all three parallels of Matthew, Mark and Luke - we find Jesus battling toe-to-toe with Satan by His utility of scripture. Unless we as Christians approach daily Christian life and spiritual warfare as a Spirit-filled and Word-filled people, we will fail in our daily fight of faith. Jesus supremely and perfectly modeled this for us and by His Spirit makes available the power to do as He did. Today we want to consider the enemies that Jesus fought in this wilderness temptation. The three enemies that Jesus faced and defeated can be described as the three common enemies of the believer.

The three enemies of the believer that Jesus fought and defeated
The Devil or Satan
According to 1 John 2:14-17 there are three common enemies: Satan, the world and the flesh. Satan is the archenemy of the child of God (see 1 Peter 5:8). Thankfully we never have to deal with him directly, but more so indirectly through His vast-network of demonic agents (see 2 Corinthians 10:3-5; Ephesians 6:10-13). For all intents and purposes, whether dealing with demons or Satan himself, the effects and difficulties are practically indistinguishable.  Jesus of course went toe-to-toe with Satan in His temptation, His earthly ministry and in His defeat of Satan at the cross (see Acts 10:38; Colossians 2:11-12; 1 John 3:8).

Who is the Devil? A brief sketch of his personage and career reveals the following:

This sketch lays out for us why it is the Devil is the believer's common enemy in spiritual warfare. Jesus defeated Satan so that by His power we could have victory as well through the spiritual armor He has supplied (Ephesians 6:10-18). But now let's look at the two other enemies of the believer that Jesus defeated...


The flesh and the world
In 1 John 2:16 we read of three primary weapons of Satan that comprise together what we call the flesh and the world: the lust of eyes (2:16), the flesh (2:16) and the boasting about what one has (2:16). Sometimes as Christians we wonder why Jesus didn't just wipe Satan out of existence. The closest we can come to answering that question is by remembering that we are described as those who are "more than conquerors". If we are to expect to walk, talk and act like Jesus, this means necessarily experiencing everything that he did in His time on this earth. It is only in the prospect of defeat that we can understand the blessing of spiritual conquest in Jesus' name.

The world is that network of ideas and temptations organized and trafficked by the kingdom of darkness. Any thought or imagination arrayed against the authority of Jesus Christ derives from the world and entices the internal drives we call the flesh. The flesh is the combination of left over sin-remnants that operate in the natural drives that wants anything but God. How did Jesus fare in this deadly combination of external and internal enemies?

Satan did to Jesus what he did to Adam and his wife: he tempted in the realm of the drives, the senses or the lust of the eyes (Matthew 4:1-4; Luke 4:1-4). Next Satan appealed to Jesus much like Adam in the realm of the visual, of the heart, or the boastful pride of life by showing him all the kingdoms of the world. (Matthew 4:8-11; Luke 4:5-8) Then Satan appealed to Jesus like he did Adam by the lust of the flesh, the reliance of self by tempting Jesus to cast himself to the floor of the temple. (Matthew 4:5-7; Luke 4:9-13) All three of these temptations overlapped and intertwined like newly woven ropes.

Would Satan be able to tie up Jesus like he had with the other great but sinful men of the past? Thankfully not. Jesus was sinless, they were sinful. Despite being in a barren wasteland in contrast to Old Adam's idyllic settings in Genesis 3, Jesus the New Adam soundly defeated Satan. Jesus as God in human flesh warred with Satan and won this first of many battles.

The confidence we have to win in spiritual warfare as Christians
What is the believer's confidence in winning spiritual warfare? None other than Jesus Christ. Jesus' approach to spiritual warfare (Spirit-filled and Word-filled) is to be our own (see Ephesians 6:10-18; 2 Corinthians 10:3-4). Secondly, the believer's common enemies of the world, flesh and the devil were all defeated by Jesus. So then the confidence (the letter "c" of our A,B,C's) of spiritual warfare is Christ Himself. We must remember that Jesus Christ is not stuck in history. He is made personally and powerfully available to us by the Person and power of the Holy Spirit (see John 14:23; Romans 8:10-11; Colossians 1:27). He in us and us in Him, seated together in the heavenly realms (Ephesians 2:6-8). To know that Christ lives in me (Galatians 2:20) means that the One who has already obtained victory over the world, the flesh and the Devil is the same One who can give me the desire to be Spirit-filled and Word-filled.

When Jesus finished His battle with the enemy, Matthew and Luke tell us that He then began His public ministry in power and authority. He in His humanity knew He was doing the Father's will. He in His Deity submitted Himself to the Father and expressed in His humanity the desire to be submitted to the Spirit of God. This was Jesus' confidence. His confidence can be ours.
Posted by mahlon at 9:50 AM No comments: