P2 When They Knock - Jehovah Witness view of God 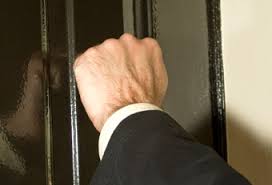 2 John 9  "Anyone who goes too far and does not abide in the teaching of Christ, does not have God; the one who abides in the teaching, he has both the Father and the Son."

Yesterday we began a new blog series entitled "When they Knock - comparing and contrasting Jehovah Witnesses to Bible believing Christianity.  We looked at the history of Jehovah Witnesses as well as the latest statistics of the movement itself.  Today's post will compare and contrast the Jehovah Witness view of God to what the Bible says.  To aid us in our study, I will be using the Baptist Faith and Message 2000 (hereafter designated "BFM 2000") to represent the viewpoint of Bible believing Christianity.

Who is God in the Bible?
a. “There is one and only One living and true God” BFM 2000.
Deuteronomy 6:4-5 states: “Hear, O Israel! The Lord is our God, the Lord is one! 5 You shall love the Lord your God with all your heart and with all your soul and with all your might."  In affirming being or nature of God as One, Biblical Christianity affirms what is called "monotheism" or belief in One, Eternal God.  In the New Testament we see the affirmation of God's oneness of being as well as the second truth about the Deity of Jesus Christ.  1 Corinthians 8:6 affirms the above observation - "yet for us there is but one God, the Father, from whom are all things and we exist for Him; and one Lord, Jesus Christ, by whom are all things, and we exist through Him."

b. “The Eternal Triune God reveals Himself to us as Father, Son and Holy Spirit, with distinct personal attributes, but without division of nature, essence or being.” BFM 2000

Matt. 28:18 has Jesus Himself claiming to have all authority and power as much as the Father, with Whom He shares full Deity.  2 Cor 13:14 affirms one of the clearest declarations of Trinitarian truth - "The grace of the Lord Jesus Christ, and the love of God, and the fellowship of the Holy Spirit, be with you all." Ephesians 2:18 reveals how the Triune God is approached in prayer: "for through Him we both have our access in one Spirit to the Father."

Why the Jehovah Witness view of God is incomplete
a. A quote from a Jehovah Witness resource states: “In fact, the God of the Bible is never described as being part of a Trinity.” JW.org
As can be seen in the above scripture passages, the Bible does describe God as One God Who is Father, Son and Holy Spirit.  Jehovah Witnesses will often say that the word "Trinity" is not in the Bible, and that the word is a later development.  Just because a term or word is not found in the Bible does not mean that the teaching is not there.  We could also argue that the word "Bible" is not found in the Bible either, however that does not negate the idea of the 66 inspired books being regarded as the complete set of Divinely revealed books called by early Christians "The Bible".

b. Jehovah Witness teaching: “The obvious conclusion is that Satan is the originator of the trinity doctrine.” Publication “Let God be true”

Contrary to Jehovah Witness teaching, it is not obvious, since the doctrine of God in the Bible includes the idea of God being One in existence and plural in identity.  Such a statement about God's Triune nature being from satan is heretical if not blasphemous.  If God did not relate within Himself from all eternity as Father, Son and Holy Spirit, then He would had been lonely and in need of creating people and the universe. The Bible clearly teaches that God is not in need of anything, and that He in and of Himself in complete.  Thus the teaching of the Trinity actually guards the completeness of God in and of Himself (called by theologians His Aseity).  This is why Jehovah Witness teaching on the doctrine of God is an incomplete view.

Also too, in order to preserve the first fundamental truth of Biblical monotheism or the belief in One God, as well as to preserve the second truth of Christ's Deity, the doctrine of the Trinity must be affirmed.  Why? Consider the following set of statements:

1. There is One God worthy of worship who is called Father almost 10 times in the Old Testament

2. Jesus Christ is worshipped in the New Testament along with the Person of the Father

3. Thus Jesus Christ shares in the same Divine nature as the Father


To conclude that Jesus Christ is a created being or less than God (as affirmed by Jehovah Witnesses) would lead to idolatry, something of which the Bible forbids.  Thus Biblical monotheism demands belief in the Trinity in order to preserve the uncontested truths of God being one God and Christ's deity.  We will look more closely at the doctrine of Christ in biblical Christianity versus Jehovah Witnesses in tomorrow's post.