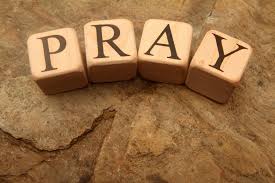 Revelation 8:3 "Another angel came and stood at the altar, holding a golden censer; and much incense was given to him, so that he might add it to the prayers of all the saints on the golden altar which was before the throne. 4 And the smoke of the incense, with the prayers of the saints, went up before God out of the angel’s hand. 5 Then the angel took the censer and filled it with the fire of the altar, and threw it to the earth; and there followed peals of thunder and sounds and flashes of lightning and an earthquake."

Richard Foster comments on the place of prayer in the Christian life
One of my favorite authors, Richard Foster, writes the following about the place of prayer in the midst of turmoil and business: "Through the Prayer of Rest God places His children in the eye of the storm.  When all around us is chaos and confusion, deep within we know stability and serenity. In the midst of intense personal struggle we are still and relaxed.  While a thousand frustrations seek to distract us, we remained focused and attentive.  This is the fruit of the Prayer of Rest."1 Foster's words truly hit home when you think about them and reminds me of my own experience of being in the eye of a storm.

Lessons learned in the silence of the eye of a hurricane
I will never forget while living in Florida the year Central Florida was struck by not one, not two but three hurricanes in a matter of six weeks.  At the time my wife and kids and I were living right where the "eye-walls" of all three storms has crossed over our very home.  By the time it was all said and done, a 100 mile zone of devastation was left in the wake.  On the night that the first hurricane (Hurricane Charley) was blowing into the area, were told it would be a category 2 hurricane with sustained winds of 110 m.p.h.  The building where we were seeking shelter had been battered by the first half of the storm, with the roof blown off down to the plywood and water running down to the walls. The winds raging outside the building sounded like fleets of jet aircraft taking off numerous runways. Sheets of rain were falling so hard that you could not see outside. I watched as the lights of our then home and the city lights blinked, dimmed and then went dark.

Suddenly, without warning...there was silence. If you have never been in a hurricane, it is all at once a most peaceful and unnerving experience.  I recall going outside in the pitch black darkness (for the power had went out at that point). As I looked up into the night sky, I beheld for the first time an endless star field of the Milky Way Galaxy.  In the eye of that storm there was no wind, no sound - only the endless stretches of countless stars declaring the glory of God and the firmament of His handiwork. (Psalm 19:1-6) Then as if without warning, the wind turned up once again, and we rode out the remainder of that first storm.  Though those storms and their aftermath contained the most painful and traumatic memories, they also were used by God to illustrate to me His Power and also the power of prayer.

Revelation 8:1-5 is an amazing stretch of scripture because of its location in the middle of Christ's revealed vision of how He will use the future tribulation period to be His theater for conquering the world.  John's exposure to future events and scenes of judgment, Israel's preparation and tribulation martyrs would had undoubtedly sent his mind and heart reeling.  Revelation 8:1-5 functions as the Divinely given eye of the storm of this set of revelatory visions in Revelation 4-11.  Consider in brief how Revelation 8:1-5 is situated at the "eye-wall" of this sweeping revelatory sequence:

1. God the Father and the Lamb on the Throne. Revelation 4-5

2. The Lamb breaks the seven seals to access earth's title deed to prepare for the earth's judgment, Israel's meeting of her Messiah and the final evangelization of planet earth. Revelation 6-7

3. Revelation 8:1-5 Silence in heaven and the prayers of the saints that will be used by the Lamb to execute judgment by way of the seven trumpets.

4. Revelation 8:6-13 The seven trumpets begin to sound well into the second half of the tribulation period. A parallel appears to exist between God having the seal judgments begin with four seals, with the remaining three having their own distinct grouping to that of the trumpet judgments having four trumpets and then the last three being also distinctive.

As Jesus brought John to see how He is going to use the prayers of God's people as part of His plan in conquering the world, some wonderful truths about God's power and need of prayer in life's storms are revealed.

God's power is perceived through prayer. Rev 8:1
The need for rest and silence before God is more needed than ever before. Even in heaven the theme of rest and silence is used by God to convey to John and to us reminders about prayer and rest in His Sovereignty and purposes.  Revelation 8:1 "When the Lamb broke the seventh seal, there was silence in heaven for about half an hour." Silence before God grants the ability to see more clearly His power. Consider the following cross references that drive home this point of prayerful rest before God and the ability to see His power:

-Psalm 62:1 "My soul waits in silence for God only; from Him is my salvation."

-Habakkuk 2:20 “But the Lord is in His holy temple. Let all the earth be silent before Him.”

-Zechariah 2:13 “Be silent, all flesh, before the Lord; for He is aroused from His holy habitation.”

Just as David in Psalms and the prophets were instructed by God to include silence and restful prayer in seeing God's greatness, so was Jesus using the same method with John.  Revelation 8:1 read in light of the above cross-references shows us the point of Jesus' inclusion of rest and prayer in the middle of this vision - to assert to John and us His Sovereign power over life, history and salvation.

God's power is granted to live for Him through prayer     Rev 8:2-4
The place given to prayer in the Christian life cannot be overestimated. The imagery John uses of the prayers of God's people functioning like incense before the throne of God is taken from the prayer lives of God's people.  For instance, Psalm 141:2 "May my prayer be counted as incense before You;The lifting up of my hands as the evening offering."

Undoubtedly connecting prayer to the incense that was burned by the priests in the temple was first revealed by God.  Passages such as Exodus 30:1,3; Leviticus 16:12 and Hebrews 9:4 all refer to the priests burning incense upon the golden altar that was in the holy place of the tabernacle or temple, and that place being designated as the place of prayer. Anytime incense was offered in conjunction with the sacrifices in the courtyard of the tabernacle or temple, the work of prayer would had been made known to the senses.  The worshippers could not see the priest once he disappeared into the holy place to perform his duties on their behalf.  However whenever that priest placed incense upon the golden altar, the worshipper in the courtyard knew that he had an intercessor working on his behalf.  To the Lord incense and aroma meant that satisfaction for sin had been rendered by the sacrifice of an innocent sin bearer on behalf of the sinning person.

Now why do we mention these details? Because prayer and its function was part fo the everyday lives of God's people in the Bible. By the days of the early church, this idea of incense and prayer as daily realities signaled how God's church continued to view prayer as God's power source for the Christian. Ephesians 5:2 reminds us: "and walk in love, just as Christ also loved you and gave Himself up for us, an offering and a sacrifice to God as a fragrant aroma." Peter writes in 1 Peter 2:4-5 "And coming to Him as to a living stone which has been rejected by men, but is choice and precious in the sight of God, 5 you also, as living stones,are being built up as a spiritual house for a holy priesthood, to offer up spiritual sacrifices acceptable to God through Jesus Christ." It is through us that the Lord works forth the knowledge of Himself as indicated by 2 Corinthians 2:14.

Sacrificial language is used to describe God's desire for a life of prayer as found in 1 Timothy 2:1-3 First of all, then, I urge that entreaties and prayers, petitions and thanksgivings, be made on behalf of all men, 2 for kings and all who are in authority, so that we may lead a tranquil and quiet life in all godliness and dignity. 3 This is good and acceptable in the sight of God our Savior

God powerfully affect things here on earth through prayer. Rev 8:5
Revelation 8:5 states "Then the angel took the censer and filled it with the fire of the altar, and threw it to the earth; and there followed peals of thunder and sounds and flashes of lightning and an earthquake." Note how there was silence in heaven for about 30 minutes.  God had John watch in silence as all the angels got in their places, all the vials or bowls were handed out and the prayers in those bowls were to be poured out. Prayer and silence must be a part of the daily life of God's people.  Prayer is one of the means ordained by God to accomplish His greater purposes here on earth. What did Jesus teach His disciples in Matthew 6:9-10 “Pray, then, in this way:
‘Our Father who is in heaven, Hallowed be Your name. 10 ‘Your kingdom come. Your will be done, On earth as it is in heaven." Certainly the final prayer of the Bible emphasizes the hastening of Christ's return here to earth in Revelation 22:20  "He who testifies to these things says, “Yes, I am coming quickly.” Amen. Come, Lord Jesus."

Conclusion
As we have considered God's power in prayer & life's storms, we have interacted with Revelation 8:1-5 in understanding how it fits in the midst of Jesus' extraordinary revelations to the Apostle John. John's vision of Revelation 4-11 has in it this incredible series of verses that show how Jesus will include God's final answers to every believer's prayer in His conquering of the world. Here is what we have learned:

Email ThisBlogThis!Share to TwitterShare to FacebookShare to Pinterest
Labels: Book of Revelation, prayer-life of the Christian, Prophecy and Prayer