The necessity of the Holy Spirit's power 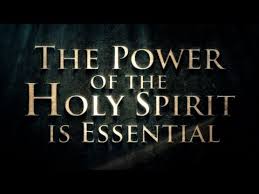 God's people had journeyed for quite a distance, and yet one thing was needful
According to the sacred text, Moses and the people of God began putting the finishing touches on the tabernacle in what is termed "the second year, on the first day of the month".  That date reference places the completion of the tabernacle exactly one year from the first Passover commemorated by Yahweh on the night before their Exodus from Egypt in Exodus 12:1-2.

Exodus 12-40 records the first year of time following the Jews deliverance by God out from under the tyranny of Pharoah.  God had in that time revealed to them their redemptive identity (Exodus 12-19); the Law (Exodus 19-24) and the Tabernacle or mobile worship center (Exodus 25-40). The people had went from the woes of Egypt to the worship of Yahweh in the freedom which He could only give.  God's grace chose them, called them and sustained them. God's pledge to His own character prevented Him from destroying them in the Golden Calf incident of Exodus 32. Through it all, God led them, fed them and revealed His grace through the giving of the plans of the Tabernacle to Moses and the leadership.

After much journeying, much revelation from God, much instruction from Moses and much gifting by the Spirit Himself - the tabernacle stood finished. It's cost in today's currency would place it at over $50 million dollars to construct, even though it was "only" 7500 square feet in total area. Gold, silver, wood and precious stones made up this focal point of the camp of the Jews. The point of it all would be for Yahweh to dwell in the midst of His people. However one thing was needful.  If this one thing, or better yet, One Person did not show up, the stately structure and august assembly of priests would be for nothing.  What was the one thing necessary in order for the tabernacle to become a true worship center for the people of God? The Power of the Holy Spirit.

1. The Spirit's power alone can guarantee the beginning God's work. Exodus 40:17-32
As you read all that Moses and the people of God did, Moses is putting in summary form the more than 11 months of time it took to prepare and construct the Tabernacle.  However think about it, lest the Holy Ghost had first spoke to Moses in revelation at the burning bush - there would had been no deliverance. Furthermore, lest Yahweh by the Holy Spirit's agency had chosen to meet the people at the Mountain in Exodus 19-20, no nation would had been formed.  Lest the Spirit had revealed the plans for the tabernacle in Exodus 25-40, as well as empowering and gifting the people to begin the work, no worship center would had occurred.  Man cannot begin the work of God without the power of the Holy Spirit.  But notice also...

2. The Holy Spirit's power alone can guarantee the finishing of God's work. Exodus 40:33-37
We read these words in Exodus 40:33 "He erected the court all around the tabernacle and the altar, and hung up the veil for the gateway of the court. Thus Moses finished the work." After all was said and done, the work had yet to be officially done.  From Exodus 40:34-37 we read of the Holy Spirit "covering" the tabernacle and then "filling" the tabernacle with the final idea of "leading" the people in their journeys with the tabernacle.  Notice those three main terms: "covering", "filling" and "leading".  We will focus primarily on the first two terms and leave the third term for the final point of this post.

The Holy Spirit's "covering" or "hovering" is used elsewhere in scripture to describe how He infuses life into creation (Genesis 1:2) and bringing about the virgin birth conception of Christ's human nature in Mary. (Luke 1:35) For the Christian, life begins at conception not only in the physical realm but the spiritual. (Titus 3:5; James 1:18; 1 Peter 1:3, 23)  The New birth is when the Holy Spirit comes to the sinner and "hovers" so to speak in the preaching of the Gospel, simultaneously raising that dead sinner to spiritual life as they freely and truly believes on Jesus as Savior, Lord and Treasure. (John 5:24-25)

Now that the Christian is regenerated and justified by faith, the process of sanctification begins with the Christian being made more like Jesus.  The Spirit and the Christian co-operate together in sanctification. (Philippians 3:12-13)  Chief among the commands for the Christian life is the command to be "filled" by the Holy Spirit. (Ephesians 5:18) Simply put, the Spirit-filled life is all about being "under the influence" of the Spirit leadership.  Obedience and fruit bearing characterizes the Spirit-filled Christian. The taking in of the scriptures through reading and meditation define the key.  Like wind filling a sail, the faith of the Christian requires daily submission to the Holy Spirit under Christ's Lordship in the scriptures in order for Christian effectiveness to result. (see Romans 8:1-5, 14-16; Galatians 5:16, 22)

In an illustrative way, we can note the following about the Jewish nation at the end of Exodus. First, the Jewish nation did not move forward lest the "cloud" moved. (40:37-38)  Secondly, the nation only knew it was time to stop and rest when the cloud or pillar of fire came to rest.  Both theophanies are none other than the Holy Spirit acting as the go-between the Father (Yahweh) and the people. Without a doubt to we could ascribe the revelatory activity of the pillar of fire or the cloud to being a Pre-incarnate appearance of Jesus Christ. Paul in 1 Corinthians 10:1-6 alludes to the leadership of God's people to that of the Pre-incarnate Son.

The Holy Spirit's job is to lead the Christian to follow Jesus Christ. (John 16:8-16; Galatians 5:16,25)  It is He who by His power enables the believer to persevere as he transmits the keeping power of the Father and the Son to the heart of the saint. (John 10:27-28; Jude 24-25) Whether in the realm of personal salvation and then sanctification, or the closely related area of calling and vocation, the Spirit's power alone guarantees the continuation of God's work.

2. The Holy Spirit's power alone can guarantee the finishing of God's work. Exodus 40:32-37

3. The Holy Spirit's power alone can guarantee the continuation of God's work. Exodus 40:38
Posted by mahlon at 7:49 AM