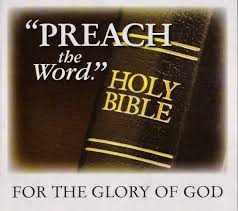 Introduction:
Today's post aims to understand how God uses preaching to change lives. In the Book of Acts we see roughly 20 examples of preaching. In Acts 13 we see the Apostle Paul's second sermon recorded in the book of Acts. Our main point of application for today will be: That God has ordained the preaching of the scriptures to convert the soul of sinners and change the lives of the saints.

Scripture, especially in the New Testament, testifies to the centrality of preaching as God's ordained means of conveying saving and sanctifying grace. Romans 10:13-17 - "for “Whoever will call on the name of the Lord will be saved.” 14 How then will they call on Him in whom they have not believed? How will they believe in Him whom they have not heard? And how will they hear without a preacher? 15 How will they preach unless they are sent? Just as it is written, “How beautiful are the feet of those who bring good news of good things!” 16 However, they did not all heed the good news; for Isaiah says, “Lord, who has believed our report?” 17 So faith comes from hearing, and hearing by the word of Christ." 1 Corinthians 1:21 "For since in the wisdom of God the world through its wisdom did not come to know God, God was well-pleased through the foolishness of the message preached to save those who believe." 1 Timothy 4:13-16 "Until I come, give attention to the public reading of Scripture, to exhortation and teaching. 14 Do not neglect the spiritual gift within you, which was bestowed on you through prophetic utterance with the laying on of hands by the presbytery. 15 Take pains with these things; be absorbed in them, so that your progress will be evident to all. 16 Pay close attention to yourself and to your teaching; persevere in these things, for as you do this you will ensure salvation both for yourself and for those who hear you."

So again we say: That God has ordained the preaching of the scriptures to convert the soul of sinners and change the lives of the saints. In the remainder of this post we want to consider Acts 13:16-52 and the following two thoughts: What constitutes a God-ordained sermon? Then secondly, the results that can occur when the Word of God is preached.

What elements are included in God-ordained preaching
As one studies the contents of Paul's sermon to the Jews in the Synagogue at Pisidian Antioch (13:14), we see the following seven key components of his sermon that can act as a recipe for putting together the types of sermons that are used by God to change lives.

7. Response of some kind (whether it be reception or rejection). Acts 13:44

The results can occur in God-ordained preaching
Having witnessed the key elements of a Biblical sermon, what results can occur when the Word of God has been proclaimed? Notice some observations from Acts 13:44-52.

1. Rejection Acts 13:44-47
Perhaps some readers would not had expected this first observation. True preaching that has been done Biblically and for the glory of Jesus Christ will not leave listeners wondering where the preacher stands, where the text stands or where they stand.  Jesus plainly said in Matthew 12:30 (KJV) "He that is not with me is against me; and he that gathereth not with me scattereth abroad." True God-centered preaching aims to get a response. Not every God-centered sermon that is preached is guaranteed to result in salvations. Truly no salvation can occur without the preaching or teaching of God's Word. Yet we know that in the Bible, whenever the Word of God was proclaimed, the so-called "squishy-middle" comprised of the non-committed was collapsed and the end result would either be those committed to Christ or those committed to opposing Christ. Clearly the refusal of the Jews in Pisidia was of their own choosing. Paul states in Acts 13:46 "Paul and Barnabas spoke out boldly and said, “It was necessary that the word of God be spoken to you first; since you repudiate it and judge yourselves unworthy of eternal life, behold, we are turning to the Gentiles." The people who ended up rejecting the Gospel did so because of their own freedom to choose out of their sinful inclinations. Acts 13:50 records how the rejecters incited others to drive Paul and Barnabas out of the area.

2. Reception. Acts 13:48-52
With the news that Paul was turning to the Gentiles with the message of salvation, a second response came forth.  After quoting Isaiah 42:6 in Acts 13:47, we read in Acts 13:48 "When the Gentiles heard this, they began rejoicing and glorifying the word of the Lord; and as many as had been appointed to eternal life believed." Why did these people believe? Two things were present for them to believe. For one thing the preached Word.

Then secondly, God's elective purpose of grace, as seen in the phrase "as many as had been appointed to eternal life believed." The Baptist Faith & Message explains what is meant by the term "Elective Purpose of Grace" - "Election is the gracious purpose of God, according to which He regenerates, justifies, sanctifies, and glorifies sinners. It is consistent with the free agency of man, and comprehends all the means in connection with the end. It is the glorious display of God's sovereign goodness, and is infinitely wise, holy, and unchangeable. It excludes boasting and promotes humility." These Gentiles believed freely as a result of God's choosing and Sovereign grace working through the preaching of the Word. All who trust in Christ as Savior and Lord do so because of Grace.  All who reject the claims of the Gospel about them and Christ do so because of their own choice. God ordains the means of salvation: (preaching, faith, repentance) without doing violence to a person's responsibility to trust on Jesus Christ and be saved. No one can comprehensively explain how both truths (Sovereignty & human responsibility) are true at the same time.  The Bible does not expound at length, and so neither should we.  Affirmation of both God's Sovereign purposes and man's choice have their meeting place in the event of the preaching of God's Word.

Closing thoughts
As we conclude this post today, we identified key elements in God-ordained preaching, as well as the typical responses that can occur when Biblical preaching is done.
Posted by mahlon at 8:46 AM