P1 Declaring and Defending the Gospel - Why Paul wrote Galatians 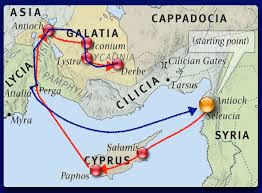 Acts 16:4-6 "Now while they were passing through the cities, they were delivering the decrees which had been decided upon by the apostles and elders who were in Jerusalem, for them to observe.5 So the churches were being strengthened in the faith, and were increasing in number daily. 6 They passed through the Phrygian and Galatian region, having been forbidden by the Holy Spirit to speak the word in Asia."

Introduction:
Today's post will feature an overview of the Book of Galatians, with the point of application being: You and I can learn how to declare and defend the Gospel by noting the overall message of Galatians. Now before getting to Galatians, the reader needs to understand how important it is to see the relationship between the Book of Acts and the New Testament Epistles or letters.

The Book of Acts gives us the necessary historical and situational details behind most of the New Testament letters. For example, we can understand the latter part of Acts 13-28 as cataloguing Paul's missionary journeys and imprisonments. By simply noting when Paul would had been traveling and when he would had been under trial or in prison can greatly aid in how we understand the New Testament letters that he wrote.

The relationship between Acts and Galatians
We know for example that Acts 13,14 and most of 15 covered what is typically called "Paul's first missionary journey". The map below summarizes for us when and where Paul would had traveled in those chapters:

In jogging through Acts 13-14 we can track Paul's trip through the region called "Galatia": Antioch to Salmis on the Island of Cyprus (13:5). Then from Antioch to Paphos on the West side of Cyprus (13:6). Paul then journeyed up to Perga in Pamphylia in Asia Minor, which was located South of the Galatian Region in (13:13). Next Paul entered into the Southern Galatian region and went to Pisidian Antioch in 13:14, Iconium in 14:1, Lystra in 14:8 and Derbe in 13:20.

What Paul then does is revisit every city he had stopped at in Acts 14:21-28. Like any good evangelist, Paul does follow-up on the New converts. Acts 14:22-23 records - "strengthening the souls of the disciples, encouraging them to continue in the faith, and saying, “Through many tribulations we must enter the kingdom of God.” 23 When they had appointed elders for them in every church, having prayed with fasting, they commended them to the Lord in whom they had believed.

As Paul was wrapping up this first missionary journey, he had ran into opposition from a sect of Jews bent on requiring the Gentile converts to be circumcised. (Acts 13:44,50; 14:2,5,19; 15:1-5). Such opposition and the need to defend and declare the Gospel led to the convening of the Jerusalem Council, led by James the half brother of Jesus in Acts 15.  After deliberating over how the Gospel should be preached among the Gospel, the Council came to the following conclusion in Acts 15:28-29  “For it seemed good to the Holy Spirit and to us to lay upon you no greater burden than these essentials: 29 that you abstain from things sacrificed to idols and from blood and from things strangled and from fornication; if you keep yourselves free from such things, you will do well. Farewell.”

Noting the constant journeying, the council that was convened at Jerusalem and the necessary declaration and defense of the Gospel provides the necessary background for understanding why Galatians was composed. This blogger believes that Paul may had composed Galatians sometime between the close of Acts 15 to Acts 16:6. Why? Because the churches that had been established in Galatia during Paul's missionary journey needed a book of the Bible.  Despite the efforts of Paul to reinforce them in their faith, they were being swayed by the very powerful Jewish faction called the Judiazers. As Paul made his second round of visits to those cities at the opening of his second missionary campaign, we read in Acts 16:5 "So the churches were being strengthened in the faith, and were increasing in number daily."

Galatians - written to defend and declare the Gospel
We will most likely get more directly into Galatians in tomorrow's post, however these words from Bible teacher Dr. Woodrow Kroll summarize why Paul wrote this first of his letters: "But despite Paul's repeated presence, from His letter to the Galatians it is evident that the believers there were losing their joy to the pressures of legalism. Legalism is when Christians revert to keeping the Law rather than living by grace. A group of Jewish teachers had passed through Galatia insisting that non-Jewish believers must obey Jewish Law and keep the traditional rules. But we cannot be saved by keeping the Law. We are saved by God's grace and must live by His grace (Ephesians 2:8-10).1

Paul's labor in those cities of Galatia that he preached through and revisited in Acts 13-14 required scripture that dealt specifically with the siren call to rely more upon legalism than the Gospel. Even with an Apostolic letter coming from a major church council in Acts 15, the churches needed the Word. Thus with all these factors in play, Paul by inspiration of the Holy Ghost penned Galatians. We will close with a brief outline of the book and explore it in more detail tomorrow.  My hope is that you have seen today the value of studying Acts and epistles like Galatians together. We are all, after all, called to declare and defend the Gospel.

Email ThisBlogThis!Share to TwitterShare to FacebookShare to Pinterest
Labels: Book of Acts, Book of Galatians