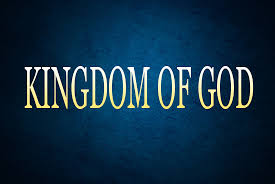 Matthew 13:1-3 "That day Jesus went out of the house and was sitting by the sea. 2 And large crowds gathered to Him, so He got into a boat and sat down, and the whole crowd was standing on the beach. 3 And He spoke many things to them in parables."

Defining the Kingdom
When we speak of the Kingdom of God, to what are we referring? God's Kingdom has to do with the domain and influence of His Person and power both in the hearts of men, history and eternity. Simon J. Kistemaker in his book, "The Parables", page 52, simply refers to God's Kingdom as "God's Royal Rule". The Baptist Faith & Message 2000 defines the Kingdom accordingly: "The Kingdom of God includes both His general sovereignty over the universe and His particular kingship over men who willfully acknowledge Him as King. Particularly the Kingdom is the realm of salvation into which men enter by trustful, childlike commitment to Jesus Christ. Christians ought to pray and to labor that the Kingdom may come and God's will be done on earth. The full consummation of the Kingdom awaits the return of Jesus Christ and the end of this age."

Undoubtedly when Jesus Christ ascended into Heaven, He went to a coronation of His kingly reign in Heaven over His church. (Acts 2:34-36; Revelation 1:5). Having inaugurated His Davidic Kingship, He awaits the time when He will return to set up His Kingdom here on earth to rule and reign 1,000 years (Revelation 20). If we were to describe Christ's ascension as "point A" and His return to set up His earthly Kingdom as "point B", then what lies in between (apart from the seven year tribulation period proceeding Christ's second coming) would mainly describe this church age in which we are living. The Gospel we preach is after all the Gospel of the Kingdom, being that it is issued forth by King Jesus who has all authority in Heaven and on earth. (Matthew 28:18-20).

Today's post simply aims to see how Jesus Himself explained the facets of this Kingdom.  Eight parables are told by Jesus in Matthew 13, and each of them describe a facet of the Kingdom.  Much like a brilliant diamond of truth, Jesus is turning the truth of His Kingdom in His hand for the reader to see one facet at a time. I will simply list the parables He tells in Matthew 13, with a brief word or two about the main points being conveyed.  Hopefully by the end of today's post, the reader will gain a fuller understanding of Jesus' Kingdom parables and the Kingdom of God itself in Matthew 13.

4. Parable of he Yeast/Leaven.
Influence of the Kingdom. Matthew 33-35

5. Parable of the Hidden Treasure. Joy of the Kingdom. Matthew 13:44