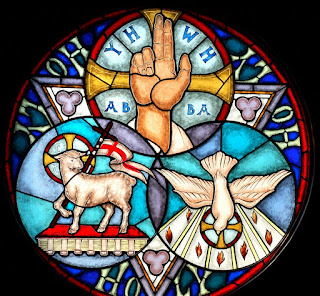 Ephesians 2:13-18 But now in Christ Jesus you who formerly were far offhave been brought near by the blood of Christ.14 For He Himself is our peace, who made both groups into one and broke down the barrier of the dividing wall, 15 by abolishing in His flesh the enmity, which is the Law of commandments contained in ordinances, so that in Himself He might make the two into one new man, thusestablishing peace, 16 and might reconcile them both in one body to God through the cross, by it having put to death the enmity. 17 And He came and preached peace to you who were far away, and peace to those who were near; 18 for through Him we both have our access in one Spirit to the Father."

Introduction:
In yesterday's post we considered how Jesus the Son is active in the conversion of sinners. The above passage of scripture expresses not only Christ's finished work of accomplished redemption, but also His work in the application of salvation. Such efforts by Jesus the Son are to be understood not only in light of His activity as the ascended, exalted Jesus, but also in His relationships with the Father and the Spirit in the Godhead. When I use that term "Godhead", the word refers to the unified being of the One God that exists equally and co-eternally among the Three Persons. God is afterall One God, existing as Three Persons, with each Person being truly God.

An example of How the Trinity works together
Whenever we consider the three major works of God: creation, redemption and what will be the consummation of all things, each Person of the Trinity distinctively performs their role in the unified effort of each work. For example, God is: Father, Author of Heaven and Earth; Son, Architect of Heaven and Earth; and Spirit, Animator of Heaven and earth. Certainly to say that the Father is the Author is not to exclude Him being involved in the architecture nor the animation of all things; nor in claiming the Son to be the architect are we detracting from His involvement in the authorship and animation of all things. The Holy Spirit functions equally with the Father and Son in terms of His involvment in the authorship and architecture of all things, even though the scriptures credit Him as the primary agent behind the animation of life itself. All three persons together function and relate as One - henceforth the creation was caused by One all powerful God.

How the doctrine of the Trinity helps us to better understand Jesus' role in the conversion of sinners
As the Father, Son and Spirit have their roles in creation, much the same can be said in how the Triune God operates in salvation. The particular interest in today's post is how the Person of the Son works in the conversion of sinners as understood in relationship to the Two other Persons of the Trinity.

We first of all must recall that there is no inconsistency amidst the Trinity - since God exists equally and truly in the Three Persons of the Godhead. If we say that the Father is active in regeneration (Which we know the Father is by His effectual calling - Romans 8:29-31); and the Spirit is active in the work Himself (1 Cor 12:12-13) then the Son must be active as well. G.I. Williamson's Study Guide for the Westminster Confession of Faith, page 83, is instructive on this point. I will summarize below with a few quotes and brief explanation for clarity's sake:

Williamson notes: "We have also seen that Christ's mediatorial work concurrently involves both natures." Williamson draws his observations from Christ's current work as Prophet, Priest and King. I agree that Christ's achieved work on the cross is the objective grounds of our redemption. When Williamson makes reference to Christ's "natures", he is reminding us of how the Son is "One Person" who expresses His existence in two ways (i.e natures): as truly God and truly man. As truly God, the Son is the second Person of the Trinity, Who has and always will be in co-eternal union with the Father and Spirit, sharing in the Power and being of God; whereas as truly man, the Son is Jesus of Nazareth, crucified, risen and ascended in glorified humanity, sharing in the plights of His people. These observations provide guardrails, so that to say that Jesus is not some how involved in the regeneration of sinners would result in an unecessary division within the Godhead.

Williamson's comments further build on Christ's ongoing work in not only sustaining the faith of His people post-conversion, but also in working in the events leading up to it. He states again: "Here we shall be content to stress the fact that Christ does effectually apply redemption to those for whom He died. And in grasping this truth we will find it helpful to remember the following truths: Christ freely and sincerely offers salvation to all who hear the Gospel, whether they be elect or not. 'For many are called but few are chosen' (Mt 20:16). Again, Williamson draws out the point we are making in today's post: how the Person of the Son works in the conversion of sinners as understood in relationship to the Two other Persons of the Trinity.

Closing thoughts and applications
This particular discussion is important due to the union within God Himself over the application of salvation in our current day. God is not a begrudging God when it comes to salvation. The Son in particular reveals most clearly the intentions of the Father and endorses the effects worked forth by the Spirit in the hearts of unsaved people who believe on Him. One passage that comes to mind in asserting the union of the Trinity in the conversion of the lost is Acts 16:14, wherein we read of "The Lord opening Lydia's heart....". To refers one last time to G.I Williamson, he goes onto quote Matthew 11:28, 23:37 and John 6:37 in his comments on the Son's involvement with conversion. It is clear that more scriptures attribute regeneration to the Father and the Spirit than to Christ. Nevertheless, there is evidence enough in the New Testament, along with considerations of the Triune nature of God - in which the Son equally shares - to demonstrate that the Son is active in the regeneration of the lost.
Posted by mahlon at 10:36 AM