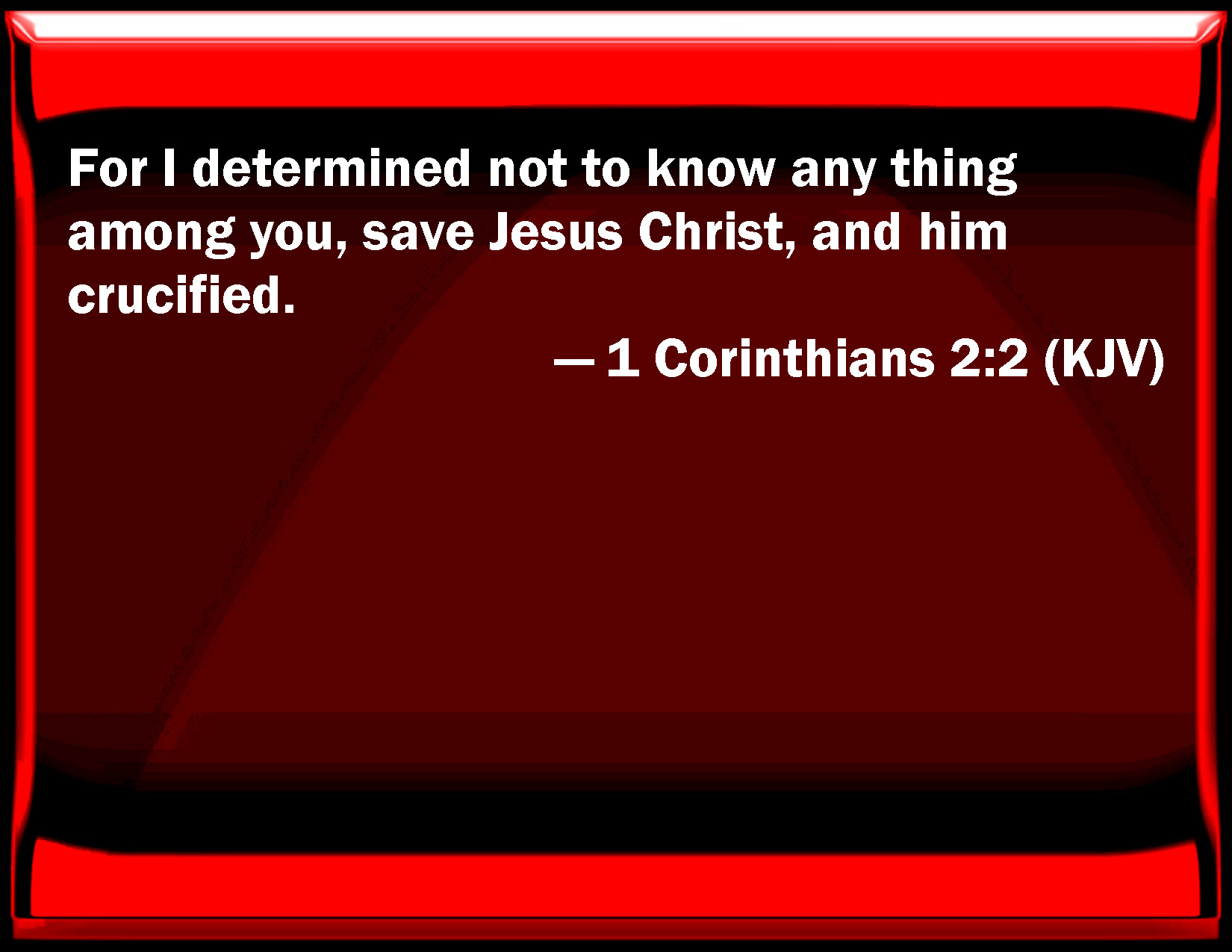 1 Corinthians 2:1-2 "And when I came to you, brethren, I did not come with superiority of speech or of wisdom, proclaiming to you the testimony of God. 2 For I determined to know nothing among you except Jesus Christ, and Him crucified."

Introduction:
Yesterday we began considering the three grounds of confidence upon which a pastor stands when ministering in the local church. The first one we considered was the word of God. Whenever I have walked up to the sacred desk, the pulpit, I have never approached the preaching task without a Bible. What will convert the soul of the sinner - save the scriptures (James 1:18)?

Admittedly today's post, like yesterday's, is aimed mainly at ministers. I will broaden the post somewhat to remind Christians in general that the grounds of confidence spoken of in these posts apply to both pastor and parishioner. We saw the first ground of confidence for the pastoral ministry (and in reality, the church's ministry) - namely the Bible. Today we consider the second grounds of confidence - namely Christ Himself.

The preacher's second ground of confidence - The Lord Jesus Christ - 1 Corinthians 2:2
We read in 1 Corinthians 2:2 "For I determined to know nothing among you except Jesus Christ, and Him crucified." Paul had already mentioned about how he had made an entry into the Corinthian's lives. Acts 18:1-11 gives the historical background for Paul's initial visit to Corinth. For one and one-half years Paul would minister there and establish a church through the combined efforts of his ministry comrads - Priscilla and Aquilla. Acts 18:5 records  - "But when Silas and Timothy came down from Macedonia, Paul begandevoting himself completely to the word, solemnly testifying to the Jews that Jesus was the Christ."

When any minister first comes to a church or has been at a church for a while - what is the One Person to whom He points? Who is it that the preacher ought to present before his people? It mustn't be primarily himself. Unless Christ and His barren cross eclipses the preacher, no one will be saved nor sanctified. When Paul states in 1 Corinthians 2:2 that he wanted his people to know nothing except "Jesus Christ and Him crucified", he was stating the anchoring point for his ministry. We know from the contents of Paul's letters to the Corinthian church that he spoke on more subjects, but never less than Christ and the cross.

"As to the matter or subject he tell us (v. 2), He determined to know nothing among them but Jesus Christ and him crucified—to make a show of no other knowledge than this, to preach nothing, to discover the knowledge of nothing, but Jesus Christ, and him crucified. Note, Christ, in his person and offices, is the sum and substance of the gospel, and ought to be the great subject of a gospel minister’s preaching. His business is to display the banner of the cross, and invite people under it."

The great 16th century preacher Martin Luther once noted: “If you want to interpret well and confidently, set Christ before you, for He is the man to whom it all applies, every bit of it.”

The wonderful preacher John Gill notes in his commentary on 1 Corinthians 2:2 - "that which was the greatest offence to others was the most delightful to him, because salvation comes through and by the cross of Christ; and he dwelt upon this, and determined to do so; it being most for the glory of Christ, and what was owned for the conversion of sinners, the comfort of distressed minds, and is suitable food for faith, as he knew by his own experience."

Why Christ? Because the grounds of confidence upon which preaching stands is the same grounds upon which salvation is situated - Christ's righteousness. Unless the people in the pew despair of their own righteousness and flee to Christ and the cross, they will despair for eternity. As the old hymn states:

Closing thoughts
Today we considered the second ground for the preacher's confidence (and for that matter, the church's confidence in her ministry) - namely the Lord Jesus Christ. The written word of God is dominated by the Personality of the God man. In like-manner, Jesus Christ came to fulfill God's word, to preach it, teach it and equip his disciples to spread it throughout the world. These two foundations for confidence in ministry are as it were woven strands that form an unbreakable rope. Ecclesiastes 4:12 states - "And if one can overpower him who is alone, two can resist him. A cord of three strands is not quickly torn apart." We have considered two cords of confidence - the scriptures and Christ. Next time we will consider a third ground of confidence for the preacher - the Holy Spirit.

Email ThisBlogThis!Share to TwitterShare to FacebookShare to Pinterest
Labels: Book of 1 Corinthians, Preachers and Preaching