Amazing Testimonies about the titles of Jesus - The Son of God: John 1:19-51 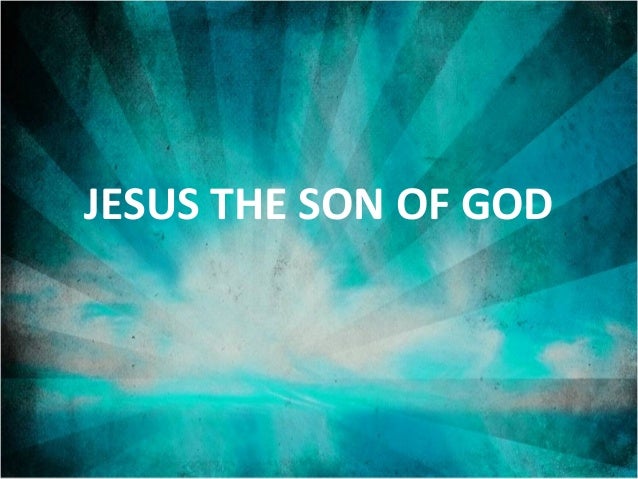 John 1:19 "This is the testimony of John, when the Jews sent to him priests and Levites from Jerusalem to ask him, “Who are you?”

John 1:32-34 "John testified saying, “I have seen the Spirit descending as a dove out of heaven, and He remained upon Him. 33 I did not recognize Him, but He who sent me to baptize in water said to me, ‘He upon whom you see the Spirit descending and remaining upon Him, this is the One who baptizes in the Holy Spirit.’ 34 I myself have seen, and have testified that this is the Son of God.”

John 1:49-50 "Nathanael answered Him, “Rabbi, You are the Son of God; You are the King of Israel.” 50 Jesus answered and said to him, “Because I said to you that I saw you under the fig tree, do you believe? You will see greater things than these.”

Introduction:
John 1:19-51 represents the beginnings of a series of testimonies concerning Jesus Christ as "The Son of God". In John's prologue of John 1:1-18 and in his key verse of John 20:31, we find that this title: "Son of God" refers to the way in which Jesus is the revelation of God the Son in human flesh. To say He is the "Son of God" is theological short-hand for "The Son as-He-is-in-His-sharing-of-the-Divine-essence-with-the-Father-Who is-God. In other words, the title: "Son of God" speaks of the Deity of Jesus Christ. In John's prologue, we find the Son of God to be God in eternity (John 1:1-3), appearing throughout history, particularly in the Old Testament (John 1:4-9) and finally in the true humanity as Jesus of Nazareth (John 1:10-18).

What the Apostle John aims to do is to unfold the identity of the Son of God through the testimonies of key individuals. Four titles for Jesus Christ are found in John 1:19-51 that serve to tell us something about Jesus Christ as the "Son of God". Peoplle such as John the Baptist, the disciples and Jesus Himself all testify about what is exactly meant and implied about this title: "Son of God". Simply reflecting on the titles that are expounded below serves as anchor points in one's own personal pilgrimage in knowing Jesus better. I will list each title, give a brief purpose for it and follow up with the appropriate scripture references.

1. The title "Lamb of God" speaks of the mission of the Son of God. John 1:19-36
After John the Baptist asserts Jesus Christ as the "Son of God", he then declares Him to be "the Lamb of God" in John 1:34-35. This title hearkens back to the Old Testament pictures of the Passover Lamb of Exodus 12 and the prophetic Lamb of Isaiah 53. Jesus Christ fulfilled those types and shadows as the final lamb of God who would willing lay down His life for the sheep.

2. The title "Christ" speaks of the ministry of the Son of God. John 1:37-42
Jesus came not only to die on the cross and raise from the dead, but to also minister life and light to those who were in spiritual and physical bondages. Passages such as Luke 4:18 and Isaiah 61:1-2 expound upon the earthly ministry of Jesus. Jesus Himself took these passages about the Messiah to be with reference to Himself. As "Christ" or "Messiah", Jesus was the Divine agent of God and, as it would turn out, was no less than God Himself in human flesh. In as much as Jesus paid for the righteousness of salvation by His substitutionary death, it is in His active obedience and all He achieved in His life, teachings and miracles that Jesus acted out the perfect righteousness required by the law of God.

3. The title "King of Israel" speaks of the majesty of the Son of God John 1:43-49
As Nathaneal confesses Jesus to be the Son of God, he then asserts an additional title, namely "The King of Israel". It is striking that such a majestic title would be used of the Son of God to describe His Heavenly origin and His cross. Above his head, on the cross, would read the superscription: "Jesus of Nazareth, King of the Jews" (Matthew 27:37). Following His resurrection from the dead, Jesus made approximately ten post-mortem appearances. In His final instructions to His disciples in Matthew 28:18, Jesus indicates that "all power had been given to Him in heaven and on earth". Undoubtedly, Nathaneal's confession of Jesus Christ as "The King of Israel" bespeaks of His majesty.

a. "Lamb of God" indicates the mission of the Son of God

b. "Christ" indicates the ministry of the Son of God

c. "King of Israel" indicates the majesty of the Son of God

With this final title revealed in John 1:19-51, we find Jesus Himself testifying of His Divine identity as the God-man. This title "Son of Man" is used more by Jesus than any other. The beauty of this title is that it can be equally used to refer to Him as perfect man as well as truly God. Daniel 7 uses this title with respect to a mysterious Divine Personage who active with the "Ancient of Days" in the dispensing of Divine rulership. By asserting himself to be the "Son of Man" and the revelation of God seen by Jacob in Genesis 28, Jesus is reminding Nathaneal that He is the Mediator between The Father and believers (see also John 14:6; 1 Timothy 2:5; 1 John 2:1-2).
Posted by mahlon at 10:01 AM

Email ThisBlogThis!Share to TwitterShare to FacebookShare to Pinterest
Labels: Gospel of John