The Transcendence of God - Meaning, Significance and Applications 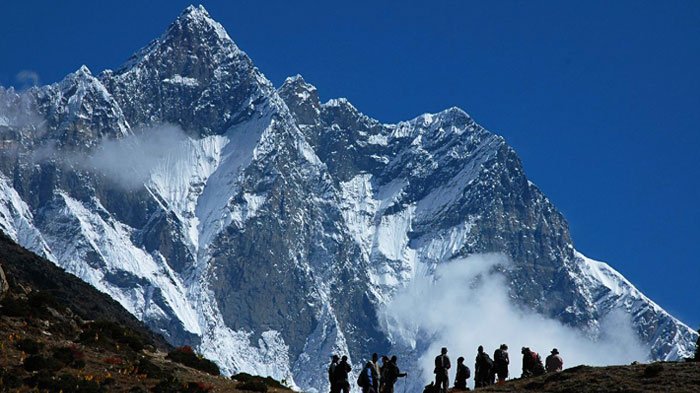 In the last post we began considering two properties of God's being that work together to reveal what kind of God He is and who He is. We began the last post with the following question: "what is God like?" We focused attention on what is called God's immanence and God's transcendence. The last post mentioned both of these traits, with space devoted mainly to defining immanence. We noted that God's immanence has to do with how God is able to make Himself known and felt at every point in the creation. As theologian Wayne Grudem has noted, the term "immanence" literally refers to how God works "in" and "through" creation.

In today's post we are going to consider the second property of God's being known as "transcendence".

A way to begin thinking of God's transcendence

A.W. Tozer's book: "Knowledge of the Holy" is an excellent book for exploring the doctrine of God. In his chapter on God's transcendence, Tozer begins with the following thought:

"To think accurately about this, however, we must keep in mind that “far above” does not here refer to physical distance from the earth but to quality of being. We are concerned not with location in space nor with mere altitude, but with life."

In the same chapter, Tozer lays out a very compelling illustration that captures how God's transcendence speaks of the infinite quality of life possessed alone by God:

"It is spirit that gives significance to matter and apart from spirit nothing has any value at last. A little child strays from a party of sightseers and becomes lost on a mountain, and
immediately the whole mental perspective of the members of the party is changed. Rapt admiration for the grandeur of nature gives way to acute distress for the lost child. The group spreads out over the mountainside anxiously calling the child’s name and
searching eagerly into every secluded spot where the little one might chance to be hidden."

"What brought about this sudden change? The tree-clad mountain is still there towering into the clouds in breath-taking beauty, but no one notices it now. All attention is
focused upon the search for a curly-haired little girl not yet two years old and weighing less than thirty pounds. Though so new and so small, she is more precious to parents and friends than all the huge bulk of the vast and ancient mountain they had been
admiring a few minutes before. And in their judgment the whole civilized world
concurs, for the little girl can love and laugh and speak and pray, and the mountain cannot. It is the child’s quality of being that gives it worth."

Tozer then closes his illustration:

"Yet we must not compare the being of God with any other as we just now compared the mountain with the child. We must not think of God as highest in an ascending order of beings, starting with the single cell and going on up from the fish to the bird to the
animal to man to angel to cherub to God. This would be to grant God eminence, even pre-eminence, but that is not enough; we must grant Him transcendence in the fullest meaning of that word.

Some Attributes of God that are closely related to His transcendence

God's transcendence is what sets Him apart from His creation. As witnessed in the passage from Isaiah 55:8-9, God's thoughts and ways are unlike our own. Moreover, God is much higher than the heavens. These designations refer to God as qualitatively in a category all to His own.

Closely related attributes of God point the way to God's transcendence. There is what is termed God's "aseity", which refers to God's self-existence and self-sufficiency (see Isaiah 43:10-11; 44:6).

The first activity of God revealed in the Bible is that of Creator. As the Transcendent cause of the universe, God is both independent of His creation and causally prior to it (see Psalm 33:6 and 1 Corinthians 8:6).

Since the creation (both the invisible and visible realms) had a beginning in the finite past, this means that the creation as a whole is dependent upon God or what theologians deem "contingent".

God as the transcendent cause of all things cannot be any other way or thing that what He is. While the universe could had been arranged in a number of ways, and didn't have to exist, such qualities are not ascribable to God. To say God must exist and thus cannot "not-exist" is what we call God's "necessary-being". These attributes of God (namely, God's aseity, creative power and necessity) are just some of the attributes that point the way to this quality of God's transcendence. To neglect God's transcendence would be to neglect God - period!

Some important scriptures that testify to God's transcendence

Some of the most incredible scriptures in God's word expound on this quality of God's being. Psalm 90:2 exclaims:

"Or You gave birth to the earth and the world, even from everlasting to everlasting, You are God."

"Do you not know? Have you not heard?
The Everlasting God, the Lord, the Creator of the ends of the earth does not become weary or tired. His understanding is inscrutable."

Whenever we turn to the New Testament, we find this same property describing the deity of Christ. Colossians 1:16-17 figures prominently in any discussion on Divine Transcendence:

"For by Him all things were created, both in the heavens and on earth, visible and invisible, whether thrones or dominions or rulers or authorities—all things have been created through Him and for Him. 17 He is before all things, and in Him all things hold together."

One more example in the New Testament that highlights Divine transcendence, particular with reference to the Son (and by extension the other two members of the Godhead, since the author is quoting Psalm 102:25-27), is found in Hebrews 1:9-11 -

But of the Son He says,

“Your throne, O God, is forever and ever, and the righteous scepter is the scepter of His kingdom. 9 “You have loved righteousness and hated lawlessness; Therefore God, Your God, has anointed You With the oil of gladness above Your companions.”
10 And, “You, Lord, in the beginning laid the foundation of the earth,
And the heavens are the works of Your hands; 11 They will perish, but You remain; and they all will become old like a garment."

Applications and significance of God's transcendence

Whenever we consider God's transcendence, we must also consider the counterpart attribute of Divine immanence. The soul of every human being thirsts for completion and thirsts to worship something greater than itself. Fallen human beings attempt to satiate these impulses in the created order. By bearing the image of God, mankind finds itself coming-up short in attaining these twin goals. The Gospel reveals that the soul's longings for completion and worship are not found in the creation - but the Creator. Theologian Michael Horton comments on how transcendence and immanence work together in God's self-disclosure of Himself ("The Christian Faith: A Systematic Theology For Pilgrims On The Way, Zondervan 2011, page 224):

"On the one hand, the revelation of God's name is a sign of transcendence, measuring the gulf between God's majesty and the human servant. Misusing God's name required the death penalty under the old covenant (Ex 20:7; Lev 24:16). Nevertheless, this name is also a sign of God's immanence, having been given to His people as a pledge of His personal presence, to be invoked in danger and praised at all times."

God's transcendence means that God is worthy of worship. God's immanence means I can know this God Whom I worship. God makes Himself known to me in the revealed Word of God and by the living Word - the Lord Jesus Christ.

Today we considered God's transcendence. We noted that this property of God's being sets Him apart from the creation. Some attributes which point the way to God's transcendence include His aseity, creative power and necessity. We also consider some of the key Biblical texts that shed further light on transcendence. We then considered how this quality of God is essential to our worship and adoration of Him. By noting how God's transcendence and immanence function together in His being, we come to better (not comprehensively) understand the God of revealed scripture.