Called to Preach - a personal testimony 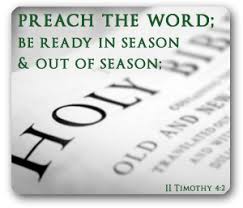 2 Timothy 4:1-2 I solemnly charge you in the presence of God and of Christ Jesus, who is to judge the living and the dead, and by His appearing and His kingdom: 2 preach the word; be ready in season and out of season; reprove, rebuke, exhort, with great patience and instruction.

Today's blog entry is more personal in nature, insofar as it traces the journey the Lord has had me, my wife and family on since calling me to serve His people.  The above text is what God used to summon me to His service and is a text of which I have preached more than any other.  May the words you read below give glory to the Lord Jesus Christ.

Called to preach: April 7th 1992
April 7th marks a very important date for me as a preacher and teacher of God's Word.  On April 7th of 1992 I preached my first sermon entitled "The Blood-washed Hills of Calvary". Months earlier, on September 21, 1991 God dramatically and specifically dealt with me in the realm of my Christian commitment.  Great conviction seized my heart, and I began reading the scriptures.  Upon arriving at 2 Timothy 4, I saw those words issued to Timothy by the Apostle Paul: "Preach the Word".  When I read those words, God spoke to me specifically: "Preach the Word!"

I will admit that I felt unworthy and ill-equipped to do the Master's bidding, and still feel that way apart from His grace. However since He was calling me to preach, there was only one thing to do: Go and preach His word!  Apart from His grace, there is no way the events that transpired from that point would have occured.  In our high school there was an annual speech league  competition.  One of the teachers approached me and asked if I would be interested in participating.  At first I hestitated but then accepted.  I began working on my first sermon, asking advice from my pastor and my father.

The day arrived, and on April 7th of 1992 I preached in a little room of about ten people at our school.  Some funny remarks were made by those judging the message I gave.  One remarked that I needed to not carry the lectern with me when I spoke.  Before I got up to speak that day, the instructor told us we had to stay behind the lectern the entire time.  However as a young preacher boy, I had watched my pastor pace back and forth during his preaching.  So in doing what I knew what to do, I carried the lecturn with me during the course of the sermon!  Needless to say the speech judges graciously graded me a B- and told me to keep working on my public speaking skills.

Called to be a husband, a dad, a pastor, a follower
God in His grace has been so good to me!  Shortly after preaching that first message, I graduated highschool and enrolled at Lancaster Bible College - Lancaster PA, in the Fall of 1992.  In two years time I met my wonderful wife Debi.  Upon my graduation from Lancaster Bible College we married on June 15, 1996.  After our first two children, the Lord led me to Biblical Theological Seminary in Hatfield, PA and I was able to graduate in 2002.  By 2003 I was ordained to the Pastoral ministry and accepted a call to pastor a church in Florida.  After five years of pastoring  and two more children in Florida, God led us out to Oklahoma in 2009.  For 19 months we lived in a town near Tulsa Oklahoma.  God had us in a new season - a season of following rather than leading, of listening rather than speaking, of healing and no longer hurting.  Waiting on God may be tough sometimes, but it is always worth it.  If I was ever to continue preaching His word, I had to abide and sit under others who did the same.  If I was to ever again lead the people of God, I had to learn how to follow and serve.  My family and I, by God's grace, were strengthened during the time of waiting for Him to turn the next page in our lives.

Called to preach at Trinity Baptist Church, April 7th 2011
In January of 2011 the page began to turn.  I was contacted by phone by a wonderful gentleman who is the Director of Missions in the Frisco Baptist Association here in South Eastern Oklahoma. That man connected me to a wonderful group of Godly men who comprised the pulpit committee for Trinity Baptist Church.  The pulpit committee contact me in February of 2011 and began talking to us about Trinity Baptist Church in Idabel Oklahoma.  By mid-March they invited us to come down for a weekend to give the congregation and us a chance to meet one another, ask questions and for me to preach some trial sermons.  After Trinity extended the call for us to come, we accepted and packed up for the journey home.  As Providence would have it, my first official day of service at Trinity began on April 7, 2011.

God does not govern life by coincidences, the joy continues
I do not believe in coincidences.  April 7, 1992 marked my first sermon ever preached, with the Lord orchestrating my first formal day of service at Trinity to be on April 7, 2011. For the past two years I have been enjoying the greatest years of my life, preaching and teaching God's Word to the greatest group of God's people any pastor could have.  This morning, April 7, 2013, I look forward once again to mounting the steps to enter in behind God's sacred desk to preach what is in God's text, for God's people and for His Glory.  My prayer is that the Lord will give my family and me many more wonderful years here in Idabel Oklahoma to preach the word and love the people!

Email ThisBlogThis!Share to TwitterShare to FacebookShare to Pinterest
Labels: Preachers and Preaching