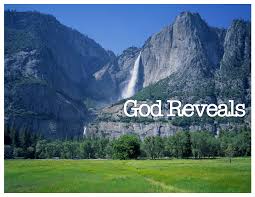 Psalm 19:1 "The heavens are telling of the glory of God; And their expanse is declaring the work of His hands."

Psalm 19 instructs you on two types of God's revelation: the general revelation about Creator God available through creation (19:1-6) and the special revelation of this same  God as the Savior and Redeemer in the Bible. (19:7-14)  General revelation is "generally" available to all people by means of observing the universe, creation and God's moral standards in the conscience. (Romans 2:15)  Special revelation is "specifically" found only in the 66 books of the Bible, and "specifically" reveals God as Father, Son and Holy Spirit.  General revelation is non-saving revelation, meaning that through it man realizes he stands condemned before His Creator. (Romans 1:18-31)
Special revelation is saving revelation, meaning that faith comes by hearing, and hearing by the Word of God. (Romans 1:17) In General revelation God is known about, whereas in special revelation -  God is known through the Fulness of Revelation -  Jesus Christ.  By the convincing work of the Holy Spirit (John 16:8-16) in the special revelation of the Bible, I come to know the God who is pointed to in General Revelation, fully revealed in the Person of Jesus Christ.
Special Revelation's relationship to prayer
Psalms 20-21 are appropriately "next door" to Psalm 19, being that they both give testimony of how God answers the prayers of the believer.  Prayer and the scriptures are hitched always together when it comes to knowing God, with He in turn making Himself known to us.
A New Testament example featuring General and Special Revelation
As you turn to Acts 19, you see Paul and his fellow missionaries experiencing the anti-revival of idolatry in Ephesus.  The people had rejected the general revelation of creation, turning themselves over to an idol of their own manufacture by the name of Artemis.  According to 1 Corinthians 10:19-20, any false gods or idols are demons in disguise.  Thankfully not all the Ephesians would be lost.  God broke through their darkness and with loving affection saved those whom He had lovingly appointed unto eternal life, with they in turn freely believing by His grace through faith.  (Acts 19:17-20; Ephesians 1-2)  If a man, woman or child will but embrace God's general revelation of Himself in creation, God will pledge to send someone with the special revelation of the Gospel, so that the Spirit can do His work that positions that person to freely trust in Jesus for their salvation. (Acts 10; 16; 17; Romans 10:8-17)
Final thoughts
Pray for your unsaved loved ones and friends and then share Jesus to those whom God sends you.
Posted by mahlon at 7:57 AM

Email ThisBlogThis!Share to TwitterShare to FacebookShare to Pinterest
Labels: Apologetics, defending and proclaiming the Gospel