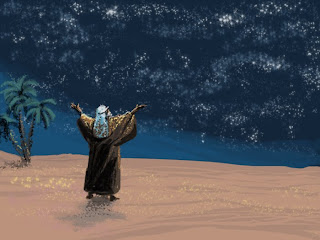 Introduction
Last week I had posted a blog featuring Genesis 3:15 that was themed around the idea of "Top Bible Prophecies".  My hope is over the course of time to bring out the top prophecies of scripture that shed much light on major prophetic themes. Today and tomorrow's posts is going to feature another Top Bible Prophetic passage: God's Covenant with Abraham in Genesis 12:1-7.  In this particular passage we will discover how God's saving purpose and kingdom purpose is prophetically revealed, and why that it meaningful for your life today.

I thought to begin today's post with a simple diagram depicting the enormous amount of ground covered by Genesis 12:1-3a.  Genesis 12 is where we see God calling Abraham out of Ur of Chaldees to journey some 800 miles to the land of Canaan.  The covenant that God made with Abraham represents the most important historic covenant of scripture. From the Fall of man to Abraham would pass some 2,000 years of time, and from Abraham to Christ's work of redemption (the cross) would pass roughly another 2,000 years. Truly and significantly Genesis 12 stands at the center of unfolding God's saving purpose.

In the above diagram, we see Abraham living between the fall and Christ's first coming.  In studying Genesis 3:15, we discover God made a Covenant of Grace with Eve: "And I will put enmity
Between you and the woman, And between your seed and her seed;
He shall bruise you on the head, And you shall bruise him on the heel.” In that first proclamation of the Gospel, God mentions that her "seed" would have an ultimate conflict with Satan.  In studying scriptures such as Colossians 2:15, Hebrews 2:14 and 1 John 3:8, we find out that the "seed" was to be none other than Jesus Christ.

2. Linking God's saving purpose from Adam to Noah, then Shem to Abraham
Amazingly, God's saving purposes, first articulated to Adam and Eve in Genesis 3, would be carried forth through ten generations stretching from Adam to Noah.  As God told Noah that He was sending a world-wide flood upon the earth due to mankind's incredible wickedness, God's saving purpose was still in view.  By means of Noah's lineage or "seed", the scarlet blood of redemption would continue.  Genesis 9:9 states this continuation of God's saving purpose through Noah -  “Now behold, I Myself do establish My covenant with you, and with your descendants after you ."  If we were to add Noah's name to the above little diagram, we would have the following picture:

Following the flood, the bloodline of redemption would continue from Noah, through his son Shem, through ten more generations.  By the time we reach the end of Genesis 11, we find the one man who was to be the tenth generation from Shem - Abram.  As God's revelation of His saving purpose unfolds, we can offer yet another little diagram that shows further detail:

Fall (Adam & Eve)--Noah-Shem---Abraham-----------------------------t
It is at Genesis 12 where we see God begin to speak to this particular man Abram.  Like a funnel, God's saving purpose began with Adam and Eve, the parents of all humanity.  From that widest point God chose a narrower portion of humanity, Noah's bloodline through Shem, that would narrow to a single individual, Abram (Abraham).

The Promise of a land for Abraham and his seed
The land promised to Abraham was to be the land of Canaan, which would be conquered by the Israelites (Abraham's physical descendants) in the book of Joshua.  As true as it was to be that Joshua and the Israelites would virtually possess the entire land (Joshua 23:15), the fulfillment of this portion of God's promise to Abraham was looking forward further into the future.  Throughout Old Testament history, the land of Israel was a physical reminder of God's promise to Abraham and his descendants.  From the River Euphrates to the Nile river represented the boundaries of the land.  Though Israel would seem to come close to possessing the entirety of the land (1 Kings 4:21), the presence of pockets or portions being contested by other peoples reminded the people of a future time wherein God would grant her the land fully and completely.

The promise of a great nation coming from Abraham
The second part of the promise, a great nation, would of course refer to those descended from Abraham.  Isaac (Genesis 26:3) and Jacob (Genesis 28:13) would be given a repeated version of God's promise to Abraham, indicating that they were to be the forebears of what would become the nation of Israel.  Over 400 years later, Moses would re-echo the promises to Abraham, Isaac and Jacob, indicating that the nation of 2 million people that God had called him to lead out of Egypt was indeed the initial fulfillment of the "mighty nation" promised to Abraham.

The promise of Great blessing
Then the third part of God's Abrahamic Covenant, namely "to be a blessing", pointed to how God was going to use Abraham and the nation coming from his bloodline to accomplish His saving purpose.  So what then would come of this three-fold promise of land, seed and blessing given to Abraham in Genesis 12:1-3a? Again looking at the simple little diagram, the cross at the end reveals the saving purpose of God that was intended:

4. God's Saving Purpose points to His Kingdom Purpose
You may have noticed in the last little diagram how all three blessings had arrows pointing past the cross.  Why? Because God's saving purpose had to be accomplished in order to bring about His Kingdom purpose.  In one respect, Abraham's covenant finds its saving purpose in Christ's first coming, however the aspect of God's kingdom purpose is in many ways yet to be fufilled.  How the three main promises of the Abrahamic Covenant have yet to be fulfilled reveals the relationship between God's saving and kingdom purposes.1

Truly God's Covenant to Abraham stands out as a top Bible prophecy.  Tomorrow we will look further at this text in seeing how it prophetically speaks to God's Kingdom purpose.2

1. We can see a little bit of this in how the three promises of Abraham's covenant will be ultimately accomplished. First, in the land of Israel the Messiah, Jesus Christ, would accomplishing the purchase of salvation. In as much as God would fulfill His saving purpose in the land, there is yet to come the full attainment of the land by Christ and Israel in the future. This full attainment of the land of Israel will take place when Christ returns, saves Israel and sets up his kingdom in Jerusalem to reign for 1,000 years.

Secondly, the purpose of Israel was to be a cradle from whenceforth the Messiah, Jesus Christ would spring. From the bloodline of Israel, and particularly one of its twelve tribes - Judah, would the Messiah be virgin born. The "seed" part of the Abrahamic Covenant in one respect was fulfilled by Christ. (Galatians 3:16) However all those who united to Christ by faith are termed the "seed of Abraham" spiritually. (Galatians 3:29; 4:28) Furthermore, the New Testament also reveals that when Christ returns, the nation of Israel will be saved. (Romans 11:25-26)

Then thirdly, the blessing of Abraham would be embodied in Jesus Christ. (Galatians 3:14) God's promise of Abraham and His seed being a blessing to many nations foresaw the eventual inclusion of the Gentiles into God's saving purposes. (Romans 4:16-17; Galatians 3:7-8)

2. God's saving purpose, realized through Abraham, would find its greatest expression in the Person and work of Jesus Christ. With the saving purpose of God complete in Christ, the wonderful message of God's covenant to Abraham would not be over with just yet. How do we know? The "land portion" of the covenant has yet to be completely and utterly fulfilled, which tells us that God has a second purpose to which His saving purpose points - namely His Kingdom purpose.
Posted by mahlon at 8:23 AM