P5 Understanding Inerrancy in its relationship to Creation, Revelation and Inspiration 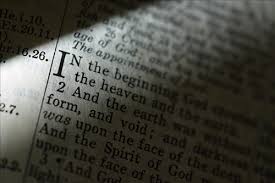 Introduction & Review
For the past four posts we have explored the Chicago Statement on Biblical Inerrancy with the aim to better understand what Biblical inerrancy is and is not. Today's post continues by taking this subject and understanding it in the broader scheme of the Bible's major themes and parts. Such a study is crucial for pastors, Bible teachers and anyone who aims to know the inerrant Lord Jesus Christ through His inerrant Word. Below is the next section of the document that aims to give an exposition or unfolding of how Biblical Inerrancy is relevant to the major themes and sections of scripture. The link for today's post and the entire document of the "Chicago Statement on Biblical Inerrancy" can be found at: http://library.dts.edu/Pages/TL/Special/ICBI_1.pdf  May these series of posts prove informative and edifying to readers.

Exposition
"Our understanding of the doctrine of inerrancy must be set in the context of the broader teachings of the Scripture concerning itself. This exposition gives an
account of the outline of doctrine from which our summary statement and articles are drawn."

"Creation, Revelation and Inspiration
The Triune God, who formed all things by his creative utterances and governs all things by His Word of decree, made mankind in His own image for a life of communion with Himself, on the model of the eternal fellowship of loving communication within the Godhead."

"As God's image-bearer, man was to hear God's Word addressed to him and to respond in the joy of adoring obedience. Over and above God's self-disclosure in the created order and the sequence of events within it,
human beings from Adam on have received verbal messages from Him, either directly, as stated in Scripture, or indirectly in the form of part or all of Scripture itself."

"When Adam fell, the Creator did not abandon mankind to final judgment but promised salvation and began to reveal Himself as Redeemer in a sequence of historical
events centering on Abraham's family and culminating in the life, death, resurrection, present heavenly ministry, and promised return of Jesus Christ. Within this frame God has from time to time spoken specific
words of judgment and mercy, promise and command, to sinful human beings so drawing them into a covenant relation of mutual commitment between Him and them in which He blesses them with gifts of grace and they
bless Him in responsive adoration."

"Moses, whom God used as mediator to carry His words to His people at the time of the Exodus, stands at the head of a long line of
prophets in whose mouths and writings God put His words for delivery to Israel. God's purpose in this succession of messages was to maintain His covenant by causing His people to know His Name - that is, His
nature - and His will both of precept and purpose the present and for the future. This line of prophetic spokesmen from God came to completion in Jesus Christ, God's incarnate Word, who was Himself a prophet - more than a prophet, but not less - and in the apostles
and prophets of the first Christian generation."

"When God's final and climactic message, His word to the world concerning Jesus Christ, had been spoken and elucidated by those in the apostolic circle, the sequence of revealed messages ceased. Henceforth the Church was to live and know God by what He had already said, and said for all time."

"At Sinai God wrote the terms of His covenant on tables of stone, as His enduring witness and for lasting - accessibility: and throughout the period of prophetic and apostolic revelation He prompted men to write the
messages given to and through them, along with celebratory records of His dealings with His people, plus moral reflections on covenant life and forms of praise and prayer for covenant mercy. The theological reality
of inspiration in the producing of Biblical documents corresponds to that of spoken prophecies: although the human writers' personalities were expressed in what they wrote, the words were divinely constituted."

"Thus, what Scripture says, God says; its authority is His authority, for He is its ultimate Author, having given it through the minds and words of chosen and prepared men who in freedeom and faithfulness "spoke from God
as they were carried along by the Holy Spirit"
(1 Pet.1:21). Holy Scripture must be acknowledged as the Word - of God by virtue of its divine origin."