How will it all end? Looking once again at Jesus' parable of the tares 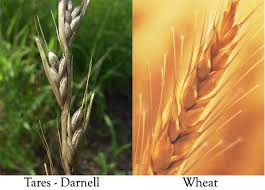 Matthew 13:24 Jesus presented another parable to them, saying, “The kingdom of heaven may be compared to a man who sowed good seed in his field.

Introduction:
Today's post features another look at Jesus' Parable of the Tares.  Scripture is certainly amazing in how one can study the same passage time and time again and come away with an insight they never saw before. In my library are hundreds of books. I have read many of those books, some old, some small. Each time I have read a given book, I think on it and then put it on my shelf.  Those books, though precious to me, are mostly one time reads. Their meaning can be exhausted and summarized. However the Bible is so different, so unique.  I have been studying God's book for over two decades and I can tell you that each time I go to it, I find something new.  It is inexhaustible. Its words are God's words. No other book - no matter how lofty in its language or strong in its argumentation can match the Bible. So it is with this Parable of the Tares. Previously I have written on this remarkable parable and so I will simply list the links to those posts for the reader's reference:


When we look specifically at the "Parable of the Tares", we find another interesting characteristic. In both Jesus telling of the parable in Matthew 13:24-30 and His explanation of it in 13:36-43, we find roughly seven verses of material featuring Jesus' teaching.  In each section, we have three main areas of focus: "The Sowers", "The Seed" and then "The Harvest". In the telling of the parable, Jesus devotes three verses (24,25,28) to the sowers, three verses to the two types of seed (26,27,29) and one verse to the harvest (30). Yet in Jesus' explanation of the parable in 13:36-43, we discover the opposite pattern: two verses for the sowers (37,39), one verse for the seed (38) and four and one-half verses dedicated to the harvest (39-43). Truly the end, the outcome, defines what goes on in the present age.


The interpretation of the parable hinges on how everyone relates to the sowers.
The two sowers
The whole Parable of the Tares centers around the sowers and the other details in how they relate to them.  It must be noted that though this parable is called "the parable of the tares", the "tares" and the "seed" are so defined by their relationship to the two sowers. The tares are those who by nature are "sons of disobedience". Paul writes for example in Ephesians 2:2 "in which you formerly walked according to the course of this world, according to the prince of the power of the air, of the spirit that is now working in the sons of disobedience." The unbelieving Pharisees are described by Jesus as having the Devil for their father in John 8:44. In contrast, the children of the Kingdom have been "born again" and have the new nature. (John 1:3; 1 Peter 1:3).

Two sowers and two seeds
Clearly the seeds are so defined by their relationship to the sowers. Now even though their are two sowers, the two are not equal.  After all, "The Sower", the Son of Man, owns the field or the world.  Furthermore, the "Enemy" will be cast into the lake of fire at the end of the age along with the tares.

In seeing how the seeds relate to the sowers, then truly the harvest is determined by the prevailing of the Sower, Jesus Christ.  With wheat and tares growing together, and the Spirit of God regenerating some of those tares through His Sovereign work and the evangelistic influence of the wheat, the same Sovereignty that guarantees the final harvest of souls is the same Sovereign Lord who gives tares the opportunity to hear the Gospel.  He through the testimony of the wheat urges those tares to be converted to wheat before the end of the harvest. Commentator Herbert Lockyer notes: "This is why He has sown you where you live and labor. As one bought with a price and born of His Spirit, and a new creation in Him and an heir of eternal life, He expects you to bear fruit in the corner of the field of this world, in which He has sowed you."

The one Sower and one final harvest
With the tares and wheat's respective relationship to the sowers shown, we now turn lastly to how the harvest relates to the sowers. Matthew 13:39-43 gives us a very important point about which sower is running the harvest - The Son of Man.  Notice that once we cross the thresh-hold of Matthew 13:39, the age has ended and now all things are in the hands of the Son of Man.  The Son of Man "sends for His angels" in 13:41 to gather out of "His" Kingdom the tares so to speak.  The power and authority of judgment is in the Son's hands in 13:42. Then the final state of the "wheat" is guaranteed. Interestingly all those "wheat" that the Son planted made it and did not "deconvert" into tares. Most commentators have noted that God alone can convert a tare into wheat.

Final thoughts
So as one can see, the entirety of the parable hangs generally upon the two sowers, and ultimately upon the One sower who owns the field - the Lord Jesus Christ. The question is: in what way are you related to Him?
Posted by mahlon at 9:56 AM