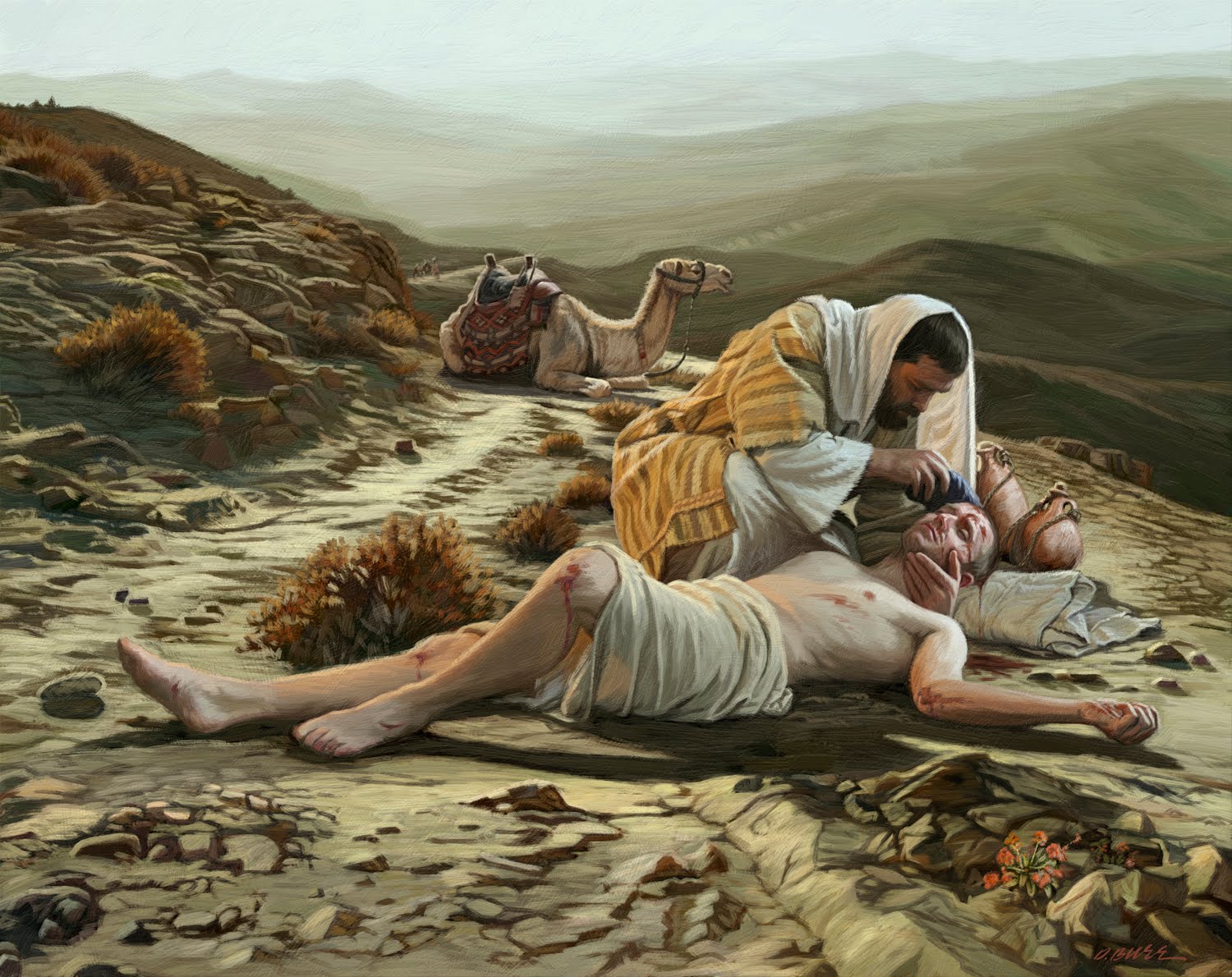 Luke 10:21-24 21 At that very time He rejoiced greatly in the Holy Spirit, and said, “I praise You, O Father, Lord of heaven and earth, that You have hidden these things from the wise and intelligent and have revealed them to infants. Yes, Father, for this way was well-pleasing in Your sight. 22 All things have been handed over to Me by My Father, and no one knows who the Son is except the Father, and who the Father is except the Son, and anyone to whom the Son wills to reveal Him.”
23 Turning to the disciples, He said privately, “Blessed are the eyes which see the things you see, 24 for I say to you, that many prophets and kings wished to see the things which you see, and did not see them, and to hear the things which you hear, and did not hear them.”

Introduction:
The opening verses set the stage for what will become a conversation centered around the question of eternal life. Jesus had sent out 70 of his followers to minister in His name. Upon their return and report about what they had seen and done, Jesus rejoices over their progress and insights. It would seem at least for the time being that some where finally grasping all that He, the Master, had been telling them. However an expert in the Old Testament would change the tone of the scene by asking a very important question, resulting in Jesus telling one of the most familiar of all His parables; the Good Samaritan. The question had to do with the subject of eternal life, and the issue as to how one acquires or obtains it. As the conversation then turns to the issue of "who then is my neighbor?", the topic of "loving one's neighbor" is closely related to the subject of eternal life. Both overlapping ideas come together in both Jesus' conversation with this expert in the Law and the resulting parable of the Good Samaritan. In today's post, we briefly want to consider the following thoughts about Eternal life as will be scene through the lens of the parable of the Good Samaritan:

Point of Application:
Eternal life will evidence a heart for God and for people in this life.

Defining Eternal Life. Luke 10:22-24
To begin, Jesus describes what it looks like when someone has experienced eternal life in Luke 10:22-24. We know that Jesus is talking about this subject due to the question that will be raised by the expert of the Law later on in the passage. Jesus' description of knowing, seeing and hearing God in and through Himself sounds very similar to John 17:3 - "This is eternal life, that they may know You, the only true God, and Jesus Christ whom You have sent." One person has defined salvation as the very life of God penetrating the human soul. How is it that God's very life manifests in the life of the believer? According to Jesus, eternal life has to do with knowing and loving God. Without a doubt the later conversation Jesus will have with the young lawyer or expert in the law cites the greatest commandment of loving God with all one's heart. We could call this the theological definition of eternal life.

There is a second and equally important definition of eternal life - namely a relational one. To love one's neighbor as oneself is defined in scripture as having eternal life, or the very life of God Himself coursing through one's actions, thoughts and words. 1 John 3:14 states - "We know that we have passed out of death into life, because we love the brethren. He who does not love abides in death." This is likely why Jesus ended up telling the parable of the Good Samaritan, to give a tangible picture of what one looks like who has actually acquired eternal life. Knowing God, Loving God and loving one's neighbor all converge together to define what it means to have eternal life. As we noted earlier, eternal life will evidence a heart for God and for people in this life. Having defined eternal life, let's then move to the question raised about eternal life.

A question is raised about eternal life. Luke 10:25-28
The young Lawyer or expert in the Law of God comes to test Jesus. This young religious leader was more interested analyzing Jesus than surrendering to Him. The question he raises is among one of the most important we find in the Bible: "What must I do to inherit eternal life?" Being that Jesus knew this man's expertise, he took the man to the law of God itself. It was a common practice among the Jews to study the Law of God in tandem and arrive at an understanding of it through a series of questions. 1

As Jesus asks the question to this expert about how he reads the law on the matter, what Jesus is doing is to get the man to see himself in the mirror of God's law. Later on in Luke 10:29 we see the man "wanting to justify himself", a tragic statement about what looked to be an otherwise positive conversation. The young man answered Jesus' question with impeccable accuracy, however by virtue of the fact that he was trying to justify himself meant he was missing the whole point of the conversation.

The strategy of Jesus in taking the man to the Law of God was brilliant and Biblical. Why? Only the Law of God can show me my need for the grace of God. It is in the Law of God we see mention made about salvation and the need for it. In-as-much as the Law of God demands us to be made right with God, it cannot supply what it demands. This young man perhaps thought He could find a way to have eternal life while hanging onto his own righteousness.

Jesus then switches up tactics and tells one of the most important of his parables. Essentially several characters in the story are introduced, all of which the young expert in the law would had understood. He himself would had recognized the Priest and Levite, since most likely he himself was closely alligned with both types of men. These were considered the religious elite. If anyone had eternal life- it would surely be a priest or a servant in the temple (i.e a Levite).

But then Jesus introduces a third main character - a Samaritan. Now of course as is always the case in most of Jesus' parables, there is the pattern of a problem needing to be solved, people who are cast as potential heroes or villians, and then a resolution that drives home a particular point. The goal of any parable is to move from the unknown to the known. In this instance, Jesus was aiming to answer the question: who then is my neighbor?

Samaritans were hated by the Jews, and vice-versa. The guy who had been mugged and left for dead is the issue at hand and of course the focal point of the whole parable: who then is my neighbor? As we noted earlier, in scripture, to function as a neighbor or to love one's neghbor is to evidence eternal life.

All three main characters see the troubled man lying along the roadside, however only the Samaritan tends to the victim and ensures that he will recover and get well. Jesus then closes out the parable with a question of His own to the young expert in the Law in Luke 10:36 "Which of these three do you think proved to be a neighbor to the man who fell into the robbers’ hands?” I would say this is tantamount to Jesus saying: "Which of these three do you think proved have eternal life". Why? Because those who have eternal life will be those who love their neighbor. Indeed, eternal life will evidence a heart for God and for people in this life. So then what fruit of eternal life does Jesus bring out about this Samaritan who excercised true neigborly love for the man who had been left for dead?

The fruit of eternal life. Luke 10:29-37
Four fruits of eternal life are exhibited by the Good Samaritan: first we compassion in Luke 10:33; secondly, unselfishness in Luke 10:34; third, justice in Luke 10:35 and finally, mercy, admitted by the young lawyer in Luke 10:36. Loving one's neighbor and possession of eternal life are brought together in a couple of passages that help us see the fruit of one who knows and loves God. Micah 6:8 states - "He has told you, O man, what is good;And what does the Lord require of you
But to do justice, to love kindness,
And to walk humbly with your God?" Galatians 5:22-23 reads - "But the fruit of the Spirit is love, joy, peace, patience, kindness, goodness, faithfulness, 23 gentleness, self-control; against such things there is no law."

Jesus then closes out both the parable and his conversation with the young expert or lawyer with these words in Luke 10:37  "And he said, “The one who showed mercy toward him.” Then Jesus said to him, “Go and do the same.” In Jesus' teaching and the Jewish mind, doing and living were the chief evidences of a life in communion with God. Until someone was actually living the life, the could not say they had grasped it. The theology had to be married to practiced, which was the whole thrust of Jesus' remarks.

Closing thought:
Therefore we simply close with our main point of application: eternal life will evidence a heart for God and for people in this life.

Endnotes:
1. Author Dr. George Byron Koch in his book "What we believe in why?", page 130, gives the following insight about Jesus exchange with this young man: "If you go into a modern yeshiva (Jewish seminary), you will see men carefully studying the Tanakh (Hebrew Old Testament) and Talmud (a Rabbinic series of comments on the Talmud), sometimes alone, but often in pairs. The pairs are called 'haverim', or friends. They read together and debate, dee, long, rigorously. They ask and challenge each other, point by point. They agree and disagree. 'What does it say? How do you read it?" Koch then concludes: "Any yeshiva student would instantly recognize this form of exchange, and especially the question, 'What does the law of Moses say? How do you read it?" The question jumps out as a classic form of rabbinic questioning, and of the contesting questions to which the Rabbis put their students, and the students put each other."