This means war! Understanding the significance of spiritual warfare 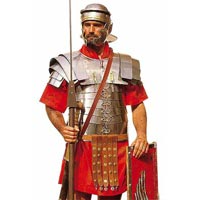 Ephesians 6:11 "Put on the full armor of God, so that you will be able to stand firm against the schemes of the devil."

Introduction:
When Paul began writing the Epistle to the Ephesians, he made this statement in Ephesians 1:16-18 "do not cease giving thanks for you, while making mention of you in my prayers; 17 that the God of our Lord Jesus Christ,the Father of glory, may give to you a spirit of wisdom and of revelation in the knowledge of Him. 18 I pray that the eyes of your heart may be enlightened, so that you will know what is the hope of His calling, what are the riches of the glory of His inheritance in the saints." As Paul wrote to a church situated in a city regarded by the Roman Empire as the chief city of Asia Minor, he knew that much opposition would rise in distracting the Ephesians away from their quest to heed "the hope of His calling". Undoubtedly Paul's situation of being chained to a Roman soldier was used by the Holy Spirit in the commands we see in Ephesians 6:11-18 to "put on the whole armor of God."

Many other voices will attempt to throw us off the pathway of faith, nonetheless we have been equipped by God to "fight the good fight of faith" as Paul would speak about in his final Epistle of 2 Timothy 4:7.

Today's post is all about introducing the reader to a series of posts I plan on writing over the course of time. As Christians we are in a war. Victory is assured, however our safety and comfort (at least temporily) are not. Ephesians 6:11 and an unfolding of the epic battle between David and Goliath in 1 Samuel 17 will start us off in this series that I am entitling: "This Means War!" Today's post particularly will aim in helping the reader to understand the significance of spiritual warfare.

This means war: Ephesians 6:11 and a shepherd boy who would be king after killing a giant
Ephesians 6:11 reads: "Put on the full armor of God, so that you will be able to stand firm against the schemes of the devil." The underlined words in the text set the tone for what will be this study. The first underlined set of words comes from a Greek word referring to a full set of armor worn by heavily armed troops. In ancient Greece and Rome, whenever a soldier had on his "full-armor", that communicated to the enemy that they were going to be defeated and that the soldier came to win. The second word translated "schemes" comes from a Greek word from whence we get our English word "methodology". Satan has devised numerous strategies or "methodologies" to discourage and destroy God's people. To therefore put on the "full armor of God" means then to put on, in obedience, the known will of God as revealed in Jesus Christ by the leading of the Indwelling Holy Spirit.

To illustrate what Paul will be picturing here in the listing of the spiritual armor (which we won't get into today's post), it is worthwhile looking at the account of David and Goliath to see in the physical historical account of their epic battle what we can learn with regards to the significance of spiritual warfare and how we can prepare for it.

1. Methods of the enemy are pride and fear. 1 Samuel 17:1-11
As Goliath taunted the armies of Israel prior to David's arrival, he used a two-fold tactic of intimidating them in fear on the one hand and exerting arrogant pride on the other. Saul, the King of Israel, is totally looking at this impending threat through the eyes of the flesh and human ability. As we will see further down into the text, Saul's instructions to David will be to trust in human confidence and ability moreso than God. The methodology of Satan to this day employs either fear or pride, with numerous combinations and expressions of each of those.

When Paul wrote what he wrote in Ephesians 6:10-11, he warned about the necessity of taking one's stand against the Devil's "schemes" or "methods". Only when we put on the full armor of God can we employ the strategy necessary to fight the fight of faith. Knowing the enemy's methodology is the first step, as David learned and as we see from Paul's exposition in Ephesians 6. Now notice secondly....

2. The mission of the enemy is to afflict God's people. 1 Samuel 17:12-30
In 1 Samuel 17:14 we read that Goliath taunted the people of God for 40 days. the number 40 in scripture is often associated with times of testing or temptation. Israel was tested and tried in the wilderness for 40 years and Jesus was tempted by Satan in the wilderness for 40 days. Satan ever lives to afflict, discourage and relentlessly accuse the people of God, for he is by nature he Father of lies (John 8:44) and Accuser of the brethren. As you read on down through 1 Samuel 17, the resolve of the people of God gets worn down. In 1 Samuel 17:11 and 17:24 we see great fear gripping the people. When David shows up to deliver food to his brothers on the battle front, the taunts of Goliath bellow forth and all but David are frightened and ready to run. As David inquires about the audacity of Goliath, his own brothers (soldiers in Saul's army) rebuke David for being over confident and not grasping the situation.

How is it that David was not able to give into the fear and pride strategy of Goliath? Though he did not nor would not put on physical armor, his mind and heart had been prepared spiritually for this moment. God's Word elsewhere recounts how God had use David's shepherding experience to train David mentally, physically and spiritually. Psalm 78:70-72 states - "He also chose David His servantAnd took him from the sheepfolds; 71 From the care of the ewes with suckling lambs He brought him To shepherd Jacob His people, And Israel His inheritance. 72 So he shepherded them according to the integrity of his heart, And guided them with his skillful hands." David recognized the mission of the enemy in taunting God and his people, and David instantly knew what his mission was - to engage the enemy on God's terms. When we realize that God's mission for us far exceeds the enemy's mission, we will be in effect putting on the spiritual armor of God. Notice the next thought we can learn about spiritual warfare from this text...

3. Might of God's strength can defeat the enemy. 1 Samuel 17:31-58
As soon as David had stated his interest in wanting to fight Goliath, word spread quickly through Saul's army. Times were desparate and there was one man who saw the situation differently than the rest. As David was brought to Saul, Saul continued looking at the battle and now David through physical eyes, rather than spiritual ones. As David recounted to Saul how God had given him victory in his shepherding over bears and lions in 1 Samuel 17:31-37, we then read of Saul trying to fit David with his own personal suit of armor. David's response in 1 Samuel 17:39 told Saul that the armor which he was trying on would fail, because it had not been tested.

In spiritual warfare, the two common mistakes we can make is to mis-identify the nature of the battle and to mistaken the source of victory in the battle. 2 Corinthians 10:3-4 tells us that our warfare is not fleshly or carnal, but is spiritual. Saul looked at the situation through the eyes of the flesh, however David ever kept in mind that the battle was not a man's battle, but God's.

This then leads to the second mistake commonly made in spiritual warfare - namely in mistaking the source of victory. What was going to ensure the victory against Goliath? Saul thought his own armor and sword would be adequate. However David wisely knew that God alone could win the battle. Techniques and strategies of the flesh are like Saul's armor: "untested and unsuitable". When David said in 1 Samuel 17:47 that "the battle is the Lord's", he was identifying from Whom the victory would derive. Thus we see how even though the methods of the enemy are fear and pride and the mission of the enemy is to afflict God's people, the Mighty power of God alone can defeat the enemy.

As many readers know, the outcome of the epic battle between David and Goliath came to an end, with David defeating the Giant with a stone and sling. There is no natural explanation for David defeating Goliath, only a supernatural one. In the flesh, the battle looked lopsided, however in the Spirit, the battle was already decided - with God being the Victor through David's sling and faith. Hebrews 11:32-34 reminds us: "And what more shall I say? For time will fail me if I tell of Gideon, Barak, Samson, Jephthah, of David and Samuel and the prophets, 33 who by faith conquered kingdoms, performed acts of righteousness, obtained promises, shut the mouths of lions, 34 quenched the power of fire, escaped the edge of the sword, from weakness were made strong, became mighty in war, put foreign armies to flight."

Closing thoughts:
So in putting on the whole armor of God, we can picture the spiritual process of doing so through the physical illustration of David and Goliath. As Paul will outline in Ephesians 6:11-18, and as we learned from looking at the account in 1 Samuel 17, we must grasp three truths to obtain victory in spiritual warfare: