Contrasting Hindu and Christian views of God and spirituality 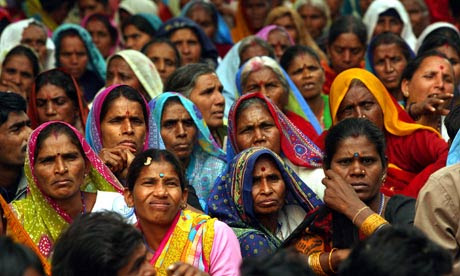 Isaiah 43:10-11 “You are My witnesses,” declares the Lord,“And My servant whom I have chosen,
So that you may know and believe Me
And understand that I am He. Before Me there was no God formed, And there will be none after Me. 11 “I, even I, am the Lord, And there is no savior besides Me.

Titus 2:13-14 "looking for the blessed hope and the appearing of the glory of our great God and Savior, Christ Jesus, 14 who gave Himself for us to redeem us from every lawless deed, and to purify for Himself a people for His own possession, zealous for good deeds."

Introduction and Review:
Yesterday we considered a suggested way of sharing the Gospel with a Hindu. Today is a continuation of yesterday's discussion, aimed at dealing with specific doctrinal truths one can share to help their Hindu friend see the difference between Christianity and Hinduism. In my experience of talking with Hindus, their underlying belief is that all religions can be tacked onto Hinduism, regardless of the differences. It is vital that in sharing the Gospel of Jesus Christ with Hindus that we stress the exclusivity of salvation by grace alone, through faith alone in Christ alone in a compassionate, winsome way.

God is immanent and transcedent, but not Pantheistic
First of all let's define some terms. Pantheism is the belief that God is all and all is God. Hinduism is partly pantheistic, meaning that all life, humanity and their concept of deity are all rolled up into one. In Pantheism, to look at a flower, a tree or the air is to experience god as much as I am god and you are god. The Bible makes it plain that God is to be regarded in a complete category by Himself apart from His creation. Bible teachers use the term "transcendence" to describe this feature of the God of scripture. Passages such as Jeremiah 23:23-24; Isaiah 44:6; 1 Corinthians 8:6-7 and Romans 11:36 describe God is high and exalted above His creation. However at the same time God is also immanent, that is to say, He is everywhere with His creation. Thus in Acts 17:278 we do live and move and have our being in God and Colossians 1:16-17 describes Jesus Christ as holding all things together by the Word of His power.

Madasamy Thirumali writes the following about God's transcendence and immanance in contrast to Hinduism in his book: "Sharing Your Faith with a Hindu", page 82: "Hindus think that becoming one with God is their ultimate salvation, calling it super-spirituality. According to the Bible, this is not acceptable. It is an idolatrous position to put God and creation as one. We are to abide in Him in the sense of fellowship, but we don't become one with Him in the sense of being equal. Christians respect and love nature as the creation of God, but we do not worship it as a god or spirit." Thirumali later writes on the same page of his book: "Christians also hold that while God is seperate from creation, He is active throughout the world and throughout history in the lives of human kind and all He has made."

Contrasting the spiritual goals of Hinduism versus Biblical Christianity
When we think about the spiritual goals set by the Gospel versus Hinduism, the difference is quite profound. Bringing out God's Transcedence and Immanence is vital, being that it avoids the trap of idolatry that is at the heart of pantheism and Hinduism in particular. Paul Carden in his video series on "Christianity, Cults and Religions", notes the following contrasts that relate to our discussion in today's post:

"In Hindu meditation, absorption into the Ultimate is the goal. In Buddhism, detachment from reality and absorption into the void is the goal. Christian meditation aims at attachment to the living God." Paul Carden then cites Psalm 48:9 as an example of how the Christian relates to the True and Living God: "We have thought on Your lovingkindness, O God,In the midst of Your temple."

Christianity alone is based in both miracles and history
The Christian faith is based around five definite miracles: Creation, a Divinely Inspired Bible, Christ's Incarnation, Christ's Resurrection and Christ's 2nd coming. All five miracles involve the all-powerful, Triune God that, being above history and creation is nonetheless involved with it. He made it. Furthermore, God speaks through a book - the Bible. Thirdly, the Son, being God, came to this world to take on human flesh and is thus the Unique Revelation of God in history and salvation. Jesus' resurrection from the dead is a documented, historical event. Then the final miracle that determines history and salvation as spelled out by Christianity is Christ's second coming.

Hinduism does not have any reliably documented miracles upon which to build its faith. Myths - yes. Narratives - yes. Truth - No. The writings of Hinduism, called the Vedas and Upanishads, are collections of Philosophy, fables and sayings that contain no examples of fulfilled prophecy. In Hinduism, there is no concept of resurrection - only reincarnation. History and life is an endless cycle, with no ultimate purpose other than an undefined one. Meanwhile Christianity asserts life and history to be a one-time time line with a beginning and an end, Creation, the cross and 2nd coming.

Salvation described by the Gospel has no comparison from Hinduism
Finally, Biblical salvation is by grace alone through faith alone in Christ alone. (John 3:16; Ephesians 2:8-9) Hinduism suggests different methods of salvation that aim at working harder and doing better but never hoping to achieve any sense of certainty about one's future, reconciliation or forgiveness.
Posted by mahlon at 8:38 AM