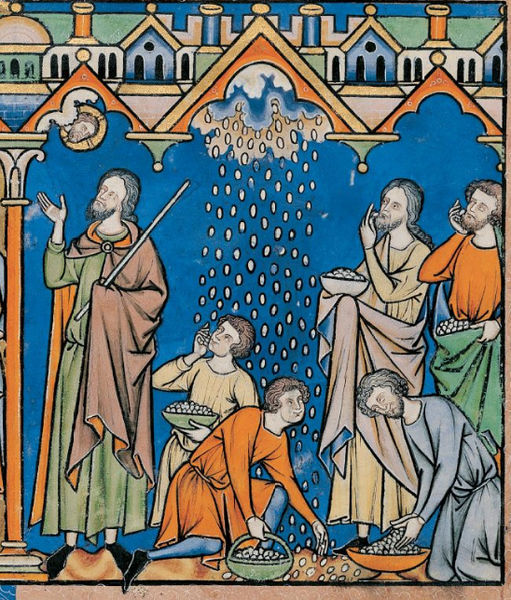 Exodus 16:1 "Then they set out from Elim, and all the congregation of the sons of Israel came to the wilderness of Sin, which is between Elim and Sinai, on the fifteenth day of the second month after their departure from the land of Egypt."

Introduction:
Today's post will focus upon the heavenly bread God sent the Israelites in their journeys with Moses through the wilderness. Such a study is pertinent to followers of Christ today, since Jesus identifies Himself as the Bread of life in John 6. Manna is so named because of the Israelite's inability to know what to call it (it means "what is this" in the Hebrew language). Many references in the Old Testament can be found about manna. However, for the sake of brevity, we will restrict our study to Exodus 16. Exodus 16 represents the first mention of Manna in the Bible. It has been often recognized that in the first mention of anything in scripture, the seeds of various themes can be found. As a final note, upon seeing the significance of God's manna in the wilderness, we should be able to see the ways it points to Jesus - God's heavenly bread of life.

1. God's heavenly bread is food for the soul meeting with God
In Exodus 16:1, we find the people of God and Moses nearing their trek to Mount Sinai. God had redeemed the people out of Egypt to lead them to Sinai to meet with Him. The heavenly manna was given at the onset of this journey. The soul that ever hopes to enjoy communion with God cannot feed on the "food of this world". God's bread from heaven would be the diet of His people in their preparations and communions with Him. Whenever we turn to John 6, Jesus uses the Old Testament manna to bring out this truth about Him being bread for the soul. In John 6:26-27 we read - "Jesus answered them and said, “Truly, truly, I say to you, you seek Me, not because you saw signs, but because you ate of the loaves and were filled. 27 Do not work for the food which perishes, but for the food which endures to eternal life, which the Son of Man will give to you, for on Him the Father, God, has set His seal.”

2. God's heavenly bread is sweet to the soul that loves God.
In Exodus 16:33 we read - "The house of Israel named it manna, and it was like coriander seed, white, and its taste was like wafers with honey." The main description we do get of manna is in its taste and appearance. The taste and appearance was both sweet to the palate and pleasing to the eye. The whiteness of the heavenly bread spoke of its purity and the sweetness of honey communicated its desirability. Jesus makes this point about comparing the manna to Himself in John 6:32-33 "Jesus then said to them, “Truly, truly, I say to you, it is not Moses who has given you the bread out of heaven, but it is My Father who gives you the true bread out of heaven. 33 For the bread of God is that which comes down out of heaven, and gives life to the world.” In the course of Jesus' teaching on Himself being the bread of life, the crowds ended up rejecting His sweetness and purity. Yet, Peter at the end of John 6:68-69 "Simon Peter answered Him, “Lord, to whom shall we go? You have words of eternal life. 69 We have believed and have come to know that You are the Holy One of God.”

3. God's heavenly bread preserves the soul on the journey of faith with God.
Two places in Exodus 16 describe how manna would be used by God to remind the people how He preserves them. In Exodus 16:33 "Moses said to Aaron, “Take a jar and put an omerful of manna in it, and place it before the Lord to be kept throughout your generations.” Then again in Exodus 16:35 "The sons of Israel ate the manna forty years, until they came to an inhabited land; they ate the manna until they came to the border of the land of Canaan." Anyone who has read the accounts of the Israelites recorded in Exodus, Leviticus, Numbers and Deuteronomy knows that they were not always faithful. At one point, the people doubted God so much that a whole generation was prohibited from entering into the land. Despite the people's unfaithfulness, God never varied in His provision of manna.

Jesus spoke of how He would be the ultimate food for the believer in their journey of faith with God. In John 6:55-58 "For My flesh is true food, and My blood is true drink. 56 He who eats My flesh and drinks My blood abides in Me, and I in him. 57 As the living Father sent Me, and I live because of the Father, so he who eats Me, he also will live because of Me. 58 This is the bread which came down out of heaven; not as the fathers ate and died; he who eats this bread will live forever.”

Closing thoughts:
Today's post focused upon how God provided heavenly bread for His people in Exodus 16. We noted how the manna pictures for us the ultimate heaven bread: the Lord Jesus Christ. We observed how Jesus tied the giving of manna to Himself as the Bread of life. In all we noted the following three truths concerning God's heavenly bread of life:

Email ThisBlogThis!Share to TwitterShare to FacebookShare to Pinterest
Labels: Book of Exodus, Gospel of John