Reflections On Jesus Christ - The Lamb of God 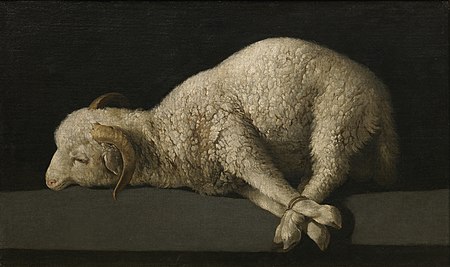 John 1:29 "The next day he saw Jesus coming to him and said, “Behold, the Lamb of God who takes away the sin of the world!"

Today's post will only but skim the surface of one of the most profound titles to describe the Lord Jesus Christ - namely, "the Lamb of God". This concept of "God's lamb" or "lamb of God" spans both Old and New Testament revelation. In this brief post, I want the reader to have a spring board from which they can launch into further study of this incredible name for Jesus.

Therefore, to summarize the goal for today's post: The Old and New Testaments both center God’s redemptive purposes around the concept of a sacrificial lamb. This idea turns out pointing to the Person of the Lord Jesus Christ. In focusing upon this title "Lamb of God", we will find a means of increasing our awe of Him.

1. Sinless, spotless Lamb for our sins.

In Exodus 12:5, we find God giving the prescription for the Passover. The Hebrew people had been in Egypt for over 400 years. Their daily life consisted of bondage and enslavement. They cried out to God, and God heard their cry. God met Moses on the backside of the Midianite desert, shepherding the flocks of his father-in-law Jethro. In Exodus 3 God meets Moses in a theophany of the burning bush. From that bush thunders the Divine voice of Yahweh - calling Moses to go to Pharoah and to say: "let my people go". When Moses inquired as to Who or what was sending him, God's response to Moses was this: "I am, Who I am." So, Moses goes to Egypt and God works forth ten plagues to make a mockery of the Egyptian pantheon and to show forth the glory of His power to both the Egyptians and the Hebrews.

On the final night prior to their crossing of the Red Sea, God sends the death angel over the land. God had told the Hebrews to take a lamb and kill it. The blood shed by the lamb was to be applied to the door posts of their homes and to the entryways of their gates. When the angel would see the blood of the lamb, he would "passover" that home, sparing the first born son. In effect, the lamb, prescribed by God, "saved" the lives of the firstborn of the Hebrew people and thus secured their future.

In Exodus 12:5 we find out about the kind of lamb that needed to be killed for this initiatory passover: "Your lamb shall be an unblemished male a year old; you may take it from the sheep or from the goats." The Hebrew word translated "unblemished" is elsewhere translated in the Old Testament as "perfect" or as the NIV renders it: "without defect". This word gives the idea of having all of its parts in perfect working order, having not one fault. The Lord Jesus Christ is described as a sinless, spotless lamb in 1 Pt 1:18-19 "knowing that you were not redeemed with perishable things like silver or gold from your futile way of life inherited from your forefathers, 19 but with precious blood, as of a lamb unblemished and spotless, the blood of Christ." So Jesus as the Lamb of God is the sinless, spotless Lamb. In order for Him to be the Savior of sinners, he needed to be sinless. As God, He is incapable of sin and as man, He never chose to sin in thought, word nor deed.

2. Saving Lamb to take away sin.

We've seen Jesus as the sinless, spotless lamb of God. Now notice with me a second trait of Jesus as the Lamb of God, namely as the "Saving Lamb". Isaiah 53:1-6 states: "Who has believed our message and to whom has the arm of the Lord been revealed? 2 He grew up before him like a tender shoot, and like a root out of dry ground.
He had no beauty or majesty to attract us to him, nothing in his appearance that we should desire him. 3 He was despised and rejected by mankind,
a man of suffering, and familiar with pain. Like one from whom people hide their faces he was despised, and we held him in low esteem. 4 Surely he took up our pain and bore our suffering,
yet we considered him punished by God, stricken by him, and afflicted.
5 But he was pierced for our transgressions, he was crushed for our iniquities; the punishment that brought us peace was on him, and by his wounds we are healed. 6 We all, like sheep, have gone astray, each of us has turned to our own way; and the Lord has laid on him the iniquity of us all."

Isaiah's prophecy takes us directly to the foot of the cross, even though that event was over 700 years removed from Isaiah's day. Isaiah then writes in 53:7 "He was oppressed and afflicted,
yet he did not open his mouth; he was led like a lamb to the slaughter, and as a sheep before its shearers is silent,  so he did not open his mouth." Clearly we find this saving substitute being compared to a saving lamb. The Apostle Peter picks up Isaiah's words and brings out their ultimate intention in 1 Peter 2:22-24 “He committed no sin, and no deceit was found in his mouth.” 23 When they hurled their insults at him, he did not retaliate; when he suffered, he made no threats. Instead, he entrusted himself to him who judges justly. 24 “He himself bore our sins” in his body on the cross, so that we might die to sins and live for righteousness; “by his wounds you have been healed.”

So we see then that Jesus, as the Lamb of God, is the spotless lamb and the saving Lamb. Let's consider one final observation, namely....

3. Sovereign Lamb Who will soon return.

As we arrive at the final book of the Bible and the New Testament, we find the Apostle John recording under divine inspiration the Heavenly throneroom. Notice what he beholds in Revelation 5:6-10 - Then I saw a Lamb, looking as if it had been slain, standing at the center of the throne, encircled by the four living creatures and the elders. The Lamb had seven horns and seven eyes, which are the seven spirits of God sent out into all the earth. 7 He went and took the scroll from the right hand of him who sat on the throne. 8 And when he had taken it, the four living creatures and the twenty-four elders fell down before the Lamb. Each one had a harp and they were holding golden bowls full of incense, which are the prayers of God’s people. 9 And they sang a new song, saying: “You are worthy to take the scroll and to open its seals, because you were slain, and with your blood you purchased for God persons from every tribe and language and people and nation. 10 You have made them to be a kingdom and priests to serve our God, and they will reign on the earth.”

Dr. John Piper has noted on this passage in Revelation that we see a "lion-like lamb"and a "lamb-like lion". As the Lamb of God, Jesus' humanity is underscored with reference to His work on the cross. However, following His resurrection and ascension into Heaven, we find the Lamb of God imagery attaching us to His deity as well. Why? If for anything else, the Son's incarnation as the God man means that He will forever be the God man, the Lamb of God, as much God as He is man, with both natures united in His person.

When I often write these posts, I feel like I only skim the surface of God's profound truth. The notion of Jesus Christ as the Lamb of God is an incredibly rich name of Jesus that could easily occupy a life-time of reflection. Nevertheless, my hope is that his has whetted the appetite of the reader. We learned three things about Jesus as the Lamb of God:

1. The Spotless or Sinless Lamb
2. The Saving Lamb
3. The Sovereign Lamb
Posted by mahlon at 10:12 AM

Email ThisBlogThis!Share to TwitterShare to FacebookShare to Pinterest
Labels: Names of Jesus