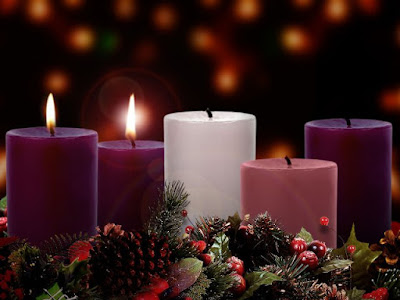 Luke 1:35 "And Mary said, “Behold, the bondslave of the Lord; may it be done to me according to your word.” And the angel departed from her."

Today's post will offer some thoughts on the significance of the second Sunday of this Advent Season, which will occur tomorrow, December 6, 2020. For the reader's reference, the first Sunday of Advent (which was last week) had a post featuring it and is found at the following link:

Advent is the season of hope and faith

The celebration of "Advent" (from a Latin noun, "adventus", meaning "come to, arrive") refers to that arrival of the Son of God into our world in His incarnation as Jesus. At the church I pastor, we will light the second Advent candle at the beginning of our morning church service. For our church at least, the second candle will represent "faith". In various Advent traditions, the second candle is deemed "The Bethlehem Candle", commemorating the culmination of Mary and Joseph's faith in God concerning the birth of the child Jesus, conceived in her womb by the Holy Spirit.

How the virginal conception of the Son of God begins and anchors faith.

What is "faith"? Faith is that firm persuasion that who God is and what He has said is true and trustworthy. Faith fits very well in one of Advent's overall purposes in the Christian calendar: to consider entrusting oneself to Jesus Christ as Savior, Lord and Treasure. When the Son of God, being truly God, was united to a true humanity supplied by Mary, The Holy Spirit united both of those natures in His Person, in her womb. As "God-in-the-flesh", He became the object, as well as already being eternally existing Author of Biblical faith (see John 1:14; 1 Timothy 3:16; Hebrews 12:1-2). Hebrews 11:1 reminds us:

"Now faith is the assurance of things hoped for, the conviction of things not seen."

In the opening verse of today's post, we find Mary receiving the news from the angel that she was the vessel through which the Son's humanity would be conceived. Properly speaking, Advent centers upon the "virginal conception" of the Son of God's humanity. Jesus' birth proceeded forward as any other birth, uniting the miraculous intervention of the Holy Spirit with the work of God in His creative handiwork (see Isaiah 7:14; Matthew 1:23; Philippians 2:5-11). The virginal conception of the Son of God represents a cardinal doctrine of Christianity which, among other things, explains how Jesus' humanity could have no taint of sin, since He had no earthly father from which to inherit the sin nature (see Romans 5:15; 1 Peter 1:18; 1 Peter 2:21-22). Unless Jesus was sinless, He could not represent sinners.

Mary received the news and all of its implications by faith. Her heart was already reconciled to God in a faith that at some point had been touched by grace (see Luke 1:30). Not only did Mary evidence outward devotion, but inward trust. The miracle conception of the Son of God is, by analogy, a reminder to us of the supernatural conception in the soul that is necessary in saving faith (see John 3:3-8). True saving faith anticipates what Jesus has done, is doing and will do. In Advent Season, Christians celebrate their "Faith".

The three "senses" of faith in the Scriptures

Faith in the Bible takes on at least three senses in the Biblical record. First, "faith" can mean one's subjective trust in God's promises, Word and Person. Second, "Faith", or what we could call "capital 'F' Faith, refers to those body of doctrines revealed by God in the scripture. The third sense of faith has to do with where our faith is directed to and embodied: Christ Himself. Christ is described for example in Hebrews 12:2 as "The Author and Finisher of faith".

When we consider all that Advent season represents, all three of these senses are present - however, the third sense in particular is the focus: namely, "Jesus as the Author and Finisher of Faith". By finding Christian faith embodied in Christ and explained in the scriptures, our personal faith is rooted in Jesus and formed by the text of scripture.

When the Advent Candles are lit
When the Advent candles are lit, the light they shine, though small, illuminates the eye of everyone in the room. The light of Advent illustrates faith. How? Faith is the flame from on high that kindles the small wick of the human heart. When the life and ministry of Jesus is brought to bear in our lives, we embrace it. Even in the shortening days of Advent season, Winter's chill and darkening skies cannot quench the flame of faith. Christ in the believer is light and life, shining in this dark world (see Philippians 2:15; Colossians 1:27).

As we carry forth into this Advent season, may we celebrate the fact that the Eternal Son came as God-incarnate. He being ever omnipotent, world-without-end arrived as a helpless infant. His mother received the news by faith. May we receive and embrace Him in faith. May Advent curb our distraction and despair. Never have hardly any of us experienced a pandemic. We must remember that the first century Jewish world into which the Son of God was born contained the darkness of tyranny, political and religious unrest and weariness. It is fitting that when Jesus began His earthly ministry in Matthew 4, the prophecy of Isaiah 9:1 would find its fulfillment in Matthew 4:16

May readers either have renewed faith or experience faith by looking to Jesus, the One who kindles faith in the heart to light the path with God when times are dark, and yet, are not hopeless.
Posted by mahlon at 7:01 AM