Part One - Without "This", You Do Not Have The Good News 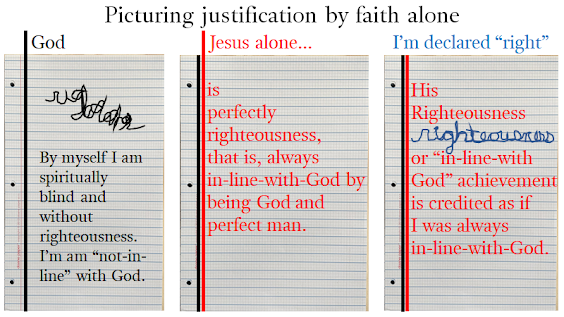 I once did a little experiment. On a piece of paper I wrote, with my eyes closed, the word “righteousness” (which turned out very badly). The reason I began my experiment in this fashion is because the Bible describes me, apart from Jesus, as "spiritually blind" and "spiritual incapable" of exercising "righteousness" or what I shall call "in-line-ment" with God's will and character. Put another way, by myself, I am spiritually blind and without righteousness and thus, I am “not-in-line” with God. I then drew a solid straight line on the left side of the paper, representing “God”.

Next, I drew another solid red line parallel to the first line, representing “Jesus”. Jesus is Perfectly Righteousness, that is, always in-line-with-God by being God and perfect man. I then rewrote the word “righteousness” with my eyes open and near the red line. Although my writing was still not perfect, yet, because of Jesus (the red-line), what I wrote was acceptable and “lined-up” with the original solid line. Christ’s righteousness or “in-line-with God” achievement is credited as if I was always in-line-with-God. The little exercise illustrated “justification by faith alone”. In justification, the main question: how is a person made right with God? Today’s message will answer that question, which is central to the good news.

What is "Justification by faith?"

Justification by faith refers to God’s legal declaration of the sinner “lining-up-perfectly” with God because of Jesus’ “perfect alignment” credited to them in saving faith. How does this take place? God "credits" the righteousness of Jesus (His perfect active obedience to the will of God the Father in His earthly life and ministry followed by His "passive" or "surrendered" obedience by His work on the cross) to myself at saving faith (see 2 Corinthians 5:21). In the Biblical teaching on justification, faith is both the necessary and sufficient condition for receiving God's legal pronouncement that I am "righteous" or "in-line" with Him. Furthermore, as Paul notes in Romans 4:25, Jesus' resurrection from the dead guaranteed that what Jesus achieved in His active and passive obedience was not only "good-enough", but more than good enough to be credited to any sinner that places their trust in Him (see Galatians 3:6-7). Without justification by faith, there is no good news.

What follows in this post and the next is a summary of this crucial doctrine of "justification by faith". I shall cover two related truths today and two related truths in the next post. My desire is that these posts would remind everyone of how wonderful the Biblical Gospel is, and that to "add-to" or "subtract from it" is to "eliminate the good news".

Readers may note that I am drawing from an episode in the life of the Old Testament patriarch Abraham. Why? Because in three New Testament books (Romans, Galatians and James), the statement: "Abraham believed God, and it was credited to Him as righteousness" is cited to express the doctrine of justification by faith. Let us note first the reason for justification - that justification is by God's grace by itself or "alone".

*God’s grace is God coming to us on the basis of the saving work He did.

In Genesis 14, we see the encounter between Abraham and a king by the name of "Melchizedek". Melchizedek, whom is described in Hebrews 7:1 “For this Melchizedek, king of Salem, priest of the Most High God, who met Abraham as he was returning from the slaughter of the kings and blessed him.” Melchizedek functions as a “type” or “picture of Christ”, coming to Abram, elsewhere pictured as a “type” or “picture” of the believer justified by faith alone. Romans 4:16 “For this reason it is by faith, in order that it may be in accordance with grace, so that the promise will be guaranteed to all the descendants, not only to those who are of the Law, but also to those who are of the faith of Abraham, who is the father of us all .” Romans 9:16 reminds us "So then it does not depend on the man who wills or the man who runs, but on God who has mercy."

*We cannot be declared righteous by God by adding to what He did.

In Genesis 14:21-23, the king of Sodom is also present to meet Abram with an offer which sounds lucrative and generous. Abram, already a believer, recognizes that the offer would result in either Abram himself or the king of Sodom taking credit for a victory which God alone had brought about. Romans 4:4-5 Now to the one who works, his wage is not credited as a favor, but as what is due. 5 But to the one who does not work, but believes in Him who justifies the ungodly, his faith is credited as righteousness. Ephesians 2:8-9 underscores the reason for justification as being that of “grace alone, apart from works”.

You may have noticed I put “alone” in the first heading ("grace alone") and this one ("faith alone"). Why faith alone?

*First, Why emphasize “faith alone”? it is Biblical.

As we read in Genesis 15:1-6, verse 6 brings to light why God would declare Abram as “perfectly-in-line” with Him. Even in the conversation of Genesis 15:1-5, God’s response to Abram’s question in verse 2: “What will you give me, since I am childless, and the heir of my house is Eliezer of Damascus?” , God’s response in verse 4 removes anything contribution by Abram, “this man shall not be your heir.” Romans 4:2-3 “For if Abraham was justified by works, he has something to boast about, but not before God. 3 For what does the Scripture say? “Abraham believed God, and it was credited to him as righteousness.”  Galatians 3:6-7 Even so Abraham believed God, and it was reckoned to him as righteousness. 7 Therefore, be sure that it is those who are of faith who are sons of Abraham.

*Second, Why emphasize “faith alone”? it is historical.

The Roman Catholic Church, throughout its history, has always taught that justification is received by “faith + baptism” and is kept by “faith + participation in the sacraments”. The Reformation of the 16th century attempted to recover the Biblical truth of “justification by faith” by emphasizing “alone”. In response, Rome convened the Council of Trent, beginning in 1525, to cover a total of 25 sessions that would serve to enunciate it's doctrinal positions and to "anathema" or "pronounce as cursed" those it deemed as heretical. It was in Trent's sixth session of 1547 that the Roman Catholic Church pronounced heretical the Reformation teaching and reaffirmed it’s position: “the instrumental cause of justification is baptism”. (It is instructive to read through the records of all the councils of Trent, which are available here: https://www.papalencyclicals.net/councils/trent/sixth-session.htm).

Even today, the Catholic Catechism of the Catholic Church (released in 1995 and available online here - https://www.vatican.va/archive/ENG0015/_INDEX.HTM) in Part 3, chapter 3, article 2, on “grace and justification”, paragraph 1987, mirrors the council of Trent:

“The grace of the Holy Spirit has the power to justify, that is, to cleanse us from our sins and to communicate to us the righteousness of God through faith in Christ Jesus and through baptism.”

It is not that the Roman Catholic Church denies the necessity of faith in in receiving salvation. Instead, Rome does not believe that faith, by itself, is sufficient to receive God's declaration of the sinner's "righteousness". Furthermore, they would deny that Christ's righteousness is "credited" to the sinner in saving faith. Instead, Rome advocates that His righteousness is "infused" or "poured into" the recipient over the course of their life by participation in the church's sacraments or "means of justifying grace", such as baptism and penance.

This is what Christian leaders such as Martin Luther, John Calvin, Ulrich Zwingli, John Knox and others were opposing in the sixteenth century. Beginning with Martin Luther's reformation movement in Germany, his opponents described efforts to oppose the Roman Catholic view on justification as undue protest, thus calling him and his followers "protestants". What was meant as a slur turned into a rally cry to get back to the Biblical Gospel itself. For over 500 years, most churches have found union around the doctrine of justification by faith alone - rightly protesting what is a departure from the Biblical position. Sadly, though, this union is rapidly evaporating. Contrary to many today, it is still correct to "protest" the Roman Catholic view of justification, since the very Gospel itself is at stake. I am reminded of a line from Shakespeare's "Hamlet", that many may think applies to those (like myself) that would classify themselves in the protestant camp expressed in the Reformation, which was rooted in the Biblical record itself: "The lady protests too much, methinks". I would counter that since the Roman Catholic Church has not abandoned its view on justification, if for anything, evangelical churches must persist in their "protest" by preaching the Biblical and historical Christian doctrine of justification by faith alone.

Closing thoughts: Justification by grace alone through faith alone is what makes the "good news" of the Gospel "the good news".

If faith is not sufficient by itself to receive God’s declaration of forgiveness of sins and Christ’s righteousness, then what of Abram himself, who was justified by faith before circumcision? Or, the thief on the cross in Luke 23:43 “And He said to him, “Truly I say to you, today you shall be with Me in Paradise.” The doctrine of justification answers the question: "How are we made right with God?" Since confusion over justification by faith attempts to import human efforts or other “add-ons” to Christ’s finished work, this is why we emphasize “alone”. Without this, there is no good news.

Email ThisBlogThis!Share to TwitterShare to FacebookShare to Pinterest
Labels: Justification by Faith