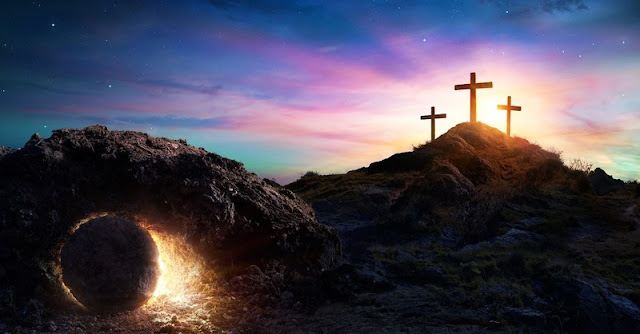 1 Peter 3:18-20 For Christ also died for sins once for all, the just for the unjust, so that He might bring us to God, having been put to death in the flesh, but made alive in the spirit; 19 in which also He went and made proclamation to the spirits now in prison, 20 who once were disobedient, when the patience of God kept waiting in the days of Noah, during the construction of the ark, in which a few, that is, eight persons, were brought safely through the water.

I was once asked a rather interesting question: "What Jesus did between the time He died until He raised from the dead?" This post aims to answer that question. The question concerning what Jesus did between His crucifixion and resurrection is relevant to "Holy Saturday". Central to this post is the notion that Jesus proclaimed victory over the powers of Hell. Furthermore, once Jesus exclaimed His triumph, He then presented His once and for all sacrifice for sin to the Father between His death and resurrection.
The significance of the Saturday the falls between "Good Friday" and "Easter Sunday"

Today is the Saturday that lies between "Good Friday" and "Easter Sunday". This day, simply called "Holy Saturday", considers what all was potentially taking place during the interment of Jesus' body in the tomb of Joseph of Arimathea. In the book "Preaching through the Christian Year", an ancient practice of the early church is recounted:

"In the ancient church, the tradition of the Easter Vigil played an important role. Catechumens (young converts to the Christian faith), after remaining awake and watchful throughout Saturday night, were baptized early on Easter morning and then joined the Christian community in Holy communion." 1

I'm sure some readers, for instance, can recall "Easter Sunrise Services" and other Christian traditions that urge the church to recall her central identity in Jesus' death, burial and resurrection. As a boy, whenever our family would attend such sunrise services, the anticipation, the excitement, hung in the air. The great thing about Holy Saturday is the expectation that builds-up in the Christ-follower's heart as the look forward to Easter Sunday.

Over 2,000 years ago, Christ's physical body laid at "rest" in the tomb while He, in His immaterial soul, presented His accomplishment to the Father and proclaimed victory. The Apostle's Creed, an ancient confession of faith still recited by Christians the world-over, includes this phrase:

"He was crucified, dead and buried. He descended into hell, on the third day He raised from the dead."

Christians historically have emphasized this major theme of "rest" for Holy Saturday. Such rest, both spiritually and otherwise, could only be achieved as a result of Christ finished work on the cross and what was (then) His pending resurrection. The work Jesus did in-between death and resurrection cemented together the victory of the cross and what would be His victory over death. It honestly comforts me to think of how helpless the powers of darkness were in preventing Christ from these decisive actions.
Robert Webber in his book: Ancient Future Time", comments on Holy Saturday in regards to the theme of "rest":

So with the twin themes of "rest" and "victory", Holy Saturday gets the Christian ready for the glory of the resurrection that is central to Easter Sunday. What follows from hereon is an attempt to draw together the New Testament testimony of what Jesus did.

The four Gospels detail the events of Christ's death, burial and resurrection.  The remainder of the New Testament (Acts, 21 Epistles and Revelation) unfold the meaning what He achieved.  The Apostle Peter in his first epistle aims to show how we as Christians ought to stand firm in God's grace (1 Peter 5:12). Peter's letter ties in our ability to stand in such grace to what Jesus Christ accomplished.  1 Peter 3:18-20 will act as our telescope to view the New Testament passages that reference the events of "Holy Saturday. To do this, we will consider the following two main thoughts about Christ's accomplished work:
A. The Purpose of Christ's Accomplished Work - reconciliation.  1 Peter 3:18
B. The Proclamation of Christ's Accomplished Work - Victory.  1 Peter 3:19-20

A. Purpose of Christ’s Victorious Work – Reconciliation 3:18
i. What did He do? He died
He died for sins.  As Dr. Danny Akin of South Western Baptist Theological Seminary once noted: "He lived the life I couldn't live and He died the death I should have died."
ii. Whom did He die for? The unjust
Romans 5:6-8 states - "For while we were still helpless, at the right time Christ died for the ungodly. 7 For one will hardly die for a righteous man; though perhaps for the good man someone would dare even to die. 8 But God demonstrates His own love toward us, in that while we were yet sinners, Christ died for us."

Jesus' death on behalf of sinners accomplished two necessary effects required for reconciliation with God. The first necessary effect was expiation or the removal of the cause of God's wrath upon us - our sin (Romans 5:10). The second effect had to do with propitiation - that is to say, the satisfaction of God's wrath (1 John 2:2). Below in the next thought (point "iii"), we see why expiation (taking away of sin) and propitiation (satisfying wrath) are necessary for reconciliation.

iii. Why did he die? To bring us to God (reconciliation)
Dr. Michael Horton notes:

Death and Resurrection serve to explain how Christ accomplished what he accomplished. What He did in His burial (down below) reveals some of the behind (and under) the scenes work He did in insuring our ability to walk as believers in His Victorious work.

B. Proclamation of Christ’s Victorious Work – Victory 3:19-20
i. What did He do between His death &    resurrection? Proclaimed victory 3:19
John MacArthur has perhaps explained this text better than just about everyone I've read or heard:

First He went immediately into the presence of His Father by way of the Holy Spirit in his human spirit to present His once and for all sacrifice (Hebrew 9:15).
Next, He went down into those regions of hell where some of the demons (especially those who rebelled in Noah's day) are being reserved for judgment.

Thirdly, Christ would had released the Old Testament saints from the righteous realm of the dead (i.e. paradise) to lead the captives out to where they could come with Him to where the saints go in this age (Ephesians 4:8-11). Some have connected this particular event to when the saints came out of their tombs in Matthew 27:52-53.
Fourthly, Christ's proclamation of victory insures that hell will not prevail against the church (Matthew 16:18) as well as fulfilling the fact of His triumph over the demonic realm (Colossians 2:14-15).
Fifthly, Christ's resurrection from the dead meant He had completed His mission of proclamation and thus He arose as a victorious King, subduing all cosmic powers under Himself (Acts 2:24; 1 Peter 3:22).
iii. Why did he proclaim His victory? To  guarantee Christian victory 3:19-20
He did this to pave the way for what would be His ascension into Heaven 40 days after His resurrection from the dead (Ephesians 4:7-10).
iv. What was His victory over? Sin (1 Pet 3:18), hell 1 Pet 3:19-20; Col 2:11-12) grave (3:18,21b)
Revelation 1:4-5 states -
"John to the seven churches that are in Asia: Grace to you and peace, from Him who is and who was and who is to come, and from the seven Spirits who are before His throne, 5 and from Jesus Christ, the faithful witness, the firstborn of the dead, and the ruler of the kings of the earth. To Him who loves us and released us from our sins by His blood".

As we draw this post to a close, let's remember our two main thoughts for today's post:

2. The Proclamation of Christ's Accomplished Work - Victory. 1 Peter 3:19-20
What Jesus accomplished was proclaimed by Him both in heaven and to the defeated demonic realm. Such activities provided grounds for which future generations of Christian could stand who by grace through faith trusted in Jesus. The cross of Friday and the work of Saturday pointed to what would be the great victory of that early Sunday Morning: He has risen! As Christians, we rest in these works of Jesus.
Endnotes:
1. Fred B. Craddock; John H. Hayes; Carl R. Holladay and Gene M. Tucker. Preaching Through the Christian Year - Part A. Trinity Press International. Harrisburg, PA. 1992. Page 227

2. Michael Horton. The Christian Faith - A Systematic Theology for Pilgrims on the Way. Zondervan. 2011. Page 500
3. http://www.gty.org/resources/sermons/60-37/the-triumph-of-christs-suffering-part-2
Posted by mahlon at 10:45 AM