Why Jesus Got Baptized 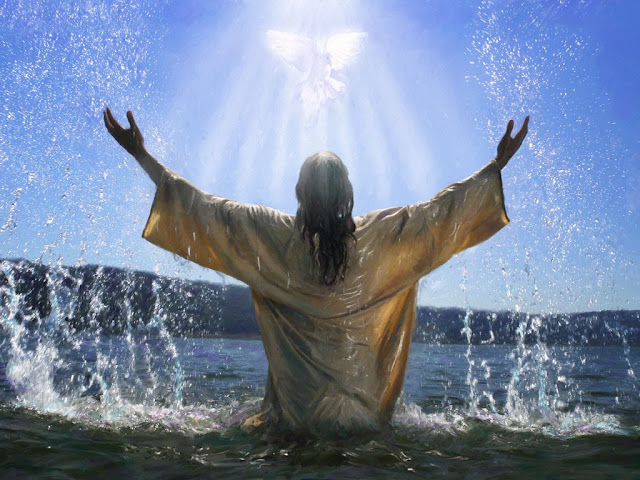 Shortly after I began to seriously study the Bible, I was puzzled as to why Jesus was baptized. Mark 1:9-11 gives us the shortest account of this inaugural event in the life of Jesus' public ministry:

In my younger days, I had understood from my study of the rest of the New Testament that baptism was administered to those who had believed on Jesus as their Savior and Lord (Acts 2:37-38; Romans 6:4-11; 1 Peter 3:21). Yet, it was plain from passages such as 1 Peter 2:21 that Jesus had no need of salvation, since He came to provide it (see Mark 10:45; Luke 19:10; Romans 10:8-10; Titus 2:11; 1 Peter 1:18). I had also understood that baptism was administered to believers for the express purpose of publicly professing their trust in Him as Savior and Lord (1 Peter 3:21). This particular point of public identification with Christ had opened up a little bit as to why Jesus Himself was baptized, since He had come to publicly identify with the people He came to redeem.

Still, the mystery as to why Jesus was baptized remained a puzzle to me until I began to compare the other Gospel accounts of His baptism in Matthew and Luke. Finally, the Lord began to unlock the mystery. In today's post, we want to explore why it was that Jesus got baptized, and why this has relevance to the Christ-follower today. It is evident from a study of all four Gospel accounts that Jesus' baptism provided the foundations needed for the Christian life. Everything Jesus would experience in His humanity would necessarily form the pattern for what the Christian ought to expect in how they live for Him in their humanity. Below, I want to sketch out three foundations which Jesus provided in His act of being baptized by John the Baptist.

"Then Jesus arrived from Galilee at the Jordan coming to John, to be baptized by him. 14 But John tried to prevent Him, saying, “I have need to be baptized by You, and do You come to me?” 15 But Jesus answering said to him, “Permit it at this time; for in this way it is fitting for us to fulfill all righteousness.” Then he permitted Him."

Matthew included this exchange between John the Baptist and Jesus to express how Jesus' active obedience (that is, His perfect life and ministry from birth to the cross) would provide the basis for the righteousness which is credited to the believer at salvation. Jesus lived a perfect, sinless human life. Whenever He got to the cross, it was as if He brought that entire line of credit. The credit-line of Jesus perfect humanity was infinitely extended by He being also truly God. Thus, for every believer, the righteousness of Jesus Christ is credited or "imputed" to them at the moment of saving faith.

Remarkably, the righteousness imputed to the believer in saving faith was made possible because, on the cross, Jesus had credited to His account the sinner's unrighteousness. Paul speaks about this in 2 Corinthians 5:21 -

"He made Him who knew no sin to be sin on our behalf, so that we might become the righteousness of God in Him."

Because of what Jesus achieved in His perfect active obedience in the course of His earthly ministry, this made Him fit to be our Savior as He would "passively obey" (that is, His willing submission, as man, to the Father's will, in His death on the cross) the Father.

The result of Jesus' active and passive obedience was validated in His resurrection from the dead. The credited righteousness of Jesus Christ could be transferred to any believing sinner, as stated in Romans 4:25 "He who was delivered over because of our transgressions, and was raised because of our justification."

Thus, this first foundation of credited righteousness is why Jesus was baptized. R.C Sproul notes in his commentary on Mark's Gospel:

The second reason Jesus was baptized was due to providing complete representation. Note what we read in Luke 3:21 -

"Now when all the people were baptized, Jesus was also baptized, and while He was praying, heaven was opened."

Luke tells us that because the people were baptized by John, Jesus chose to get baptized as a way of "identifying" Himself with them and for them. What I find interesting is the 77-generation genealogy that Luke mentions between Jesus' baptism and temptation in Luke 3:23-38. Why is this worth noting? The genealogy expresses how Jesus came as the New Adam (compare Romans 5:14; 1 Corinthians 15:45-47).

Over 70 mothers were used by God, with the mantle of motherhood placed upon the 77th, the virgin Mary, to bring about the humanity of our Lord (please read Hebrews 10:5-7). Motherhood is the well-spring of life. The point of the virginal conception of Jesus' humanity in Mary's womb was to unite the Person of the eternal Son to a perfect humanity - since Scripture attributes the sin nature as spiritually connected to the side of the human father (see 1 Peter 1:18). Moreover, Mary's genealogy in Luke demonstrated Jesus' biological connection to David's throne; whereas Matthew's genealogy, as so reckoned through Joseph's bloodline, made Jesus the legal heir to David's throne.

In order to be the mediator between believers and the Heavenly Father, an "Adam-like" representative was required. The first Adam failed and brought death upon us all (see Romans 5:12-21). As one takes a closer look at the genealogy in Luke 3:23-38, one will find Jesus as the "Second-Adam" on one end of the genealogy, and the original Adam placed on the other end of the genealogy. The parallellism of the genealogy is made complete when one realizes that Adam is called a "son of God" by creation in relationship to His Creator; whereas Jesus is "The Son of God", The Creator, Who came to take unto Himself a created human nature.

This is good and acceptable in the sight of God our Savior, 4 who desires all men to be saved and to come to the knowledge of the truth. 5 For there is one God, and one mediator also between God and men, the man Christ Jesus, 6 who gave Himself as a ransom for all, the testimony given at the proper time.

I summarize this second reason for why Jesus was baptized by way of a short poem:

He came to be in our place,

To represent the hell-bound race,

None could achieve salvation’s plan,

Only He who came to be a man.

3. Clear revelation of God because of Jesus.

So we have witnessed that Jesus was baptized to provide credited righteousness for every sinner that believes on Him as Savior and Lord; as well as to provide complete representation as the Mediator between God and believers. It is worth noting Mark 1:9-11 again, since Mark unique describes the opening up of the heavens as Jesus came up out of the baptismal waters of the Jordon River:

The Greek word rendered “opening” speaks of a ripping of the boundary between Heaven and earth. Isaiah 64:1-4 conveys this similar imagery in reference to a prophecy, which likely was echoed by Mark in His record of Jesus' baptism"

"Oh, that You would rend the heavens and come down, That the mountains might quake at Your presence— 2 As fire kindles the brushwood, as fire causes water to boil— To make Your name known to Your adversaries, That the nations may tremble at Your presence! 3 When You did awesome things which we did not expect, You came down, the mountains quaked at Your presence. 4 For from days of old they have not heard or perceived by ear, Nor has the eye seen a God besides You, Who acts in behalf of the one who waits for Him."

When Jesus was baptized, He experienced an open Heaven. What followed was a revelatory moment in which we could see the presence of all three Persons of the Trinity: the Father is heard; the Son is seen; the Spirit is experienced. Whenever a Christian is baptized, they are expressing their desire to walk under an open sky with God. Jesus came as "The Way, The Truth and the Life" (John 14:6). Whereas the Holy Spirit brings to the believer insight from the inner-life of God Himself; Jesus the Son is the One who brings the believer into contact with the inner life of God (see 2 Peter 1:3-4).

The Holy Spirit is the Ambassador of the Trinity Who brings to the Christian, by the scriptures, that Heavenly sense of purpose to live for God. The Lord Jesus Christ, as "God made flesh", brings the Christian, with his earthly experiences, into contact with the Heavenly realities so often referenced in God's Word (see Ephesians 1:18-20). In short, Jesus was baptized to remind us that He, as truly man, came to bring unto us a clear revelation of God - since He Himself is also truly God (see John 1:18; John 14:6-8; Hebrews 1:1-2).

So why was Jesus baptized? In today's post, we discovered three reasons: