Meet John The Baptist - An Arrow That Pointed To Jesus 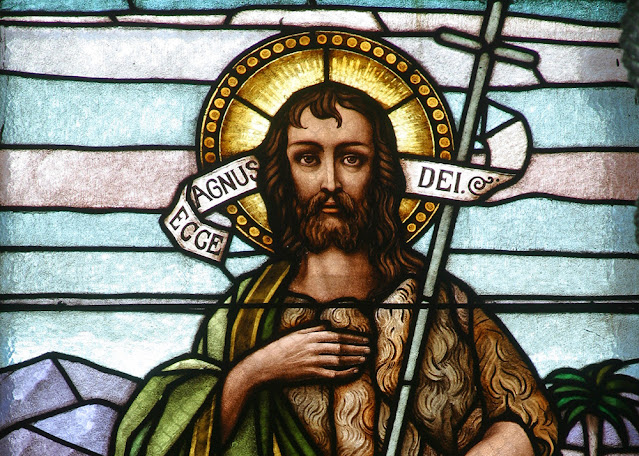 In today's post I want to consider the man whom God chose to function as a forerunner to announce the arrival of Jesus on the public scene - John the Baptist. The beautiful picture above artfully depicts John the Baptist, with a small banner containing the phrase, "ecce agnus dei", which translated means: "behold the Lamb of God". John made it his life's mission to point others to Jesus.

I recall not to long ago an illustration given by a preacher that compared the Christian's relationship to Jesus to that of the moon to the sun. The sun is a light bearer, giving off its own light as a result of thermonuclear fusion in its core. The moon, which we see at night, is a reflector of the sun's light. In like manner, we know that Jesus Christ, truly God and truly man, is the "Light of the World" (John 1:9; John 9). The Christian operates as a reflector of His light to others (Matthew 5:16; Philippians 2:15).

I'll admit that when it comes to reading the Gospels (Matthew, Mark, Luke or John), it is easy to rush past John the Baptist to get to Jesus. Yet, unless we grasp the mission and man that was John the Baptist, we could miss out on further insights into Jesus Himself and application for our own lives. Whenever we count up the number of verses devoted to John the Baptist's life and ministry in the New Testament, we arrive at over 90 verses. John the Baptist is what I call "an arrow pointing to Jesus". Let us consider some details about his life and ministry.

1. John the Baptist was predicted in the Old Testament.

In the opening verses of Mark 1:1-3 we read the following words:

"The beginning of the gospel of Jesus Christ, the Son of God. 2 As it is written in Isaiah the prophet: “Behold, I send My messenger ahead of You, Who will prepare Your way; 3 The voice of one crying in the wilderness, ‘Make ready the way of the Lord, Make His paths straight.’”

The Holy Spirit worked through the pen of Isaiah in Isaiah 40:1-3 to express this prediction. Interestingly enough, Isaiah himself was echoing back to what God said to the people through Moses in Exodus 23:20. Moreover, The Holy Spirit through Malachi, the final author of the Old Testament writing prophets, would take-up the sentiments of Isaiah and re-issue them in his own predictions about the "forerunner", John the Baptist, in Malachi 3:1. This pattern of "preparation" and "proclamation" runs its course in the New Testament accounts of John the Baptist. He functioned as an arrow, pointing to Jesus.

2. John the Baptist was the final prophet in the line of the Old Testament prophets.

If one reads more of John the Baptist in Mark 1:4-5, we see what may appear as an odd description of his wardrobe and eating habits:


"John the Baptist appeared in the wilderness preaching a baptism of repentance for the forgiveness of sins. 5 And all the country of Judea was going out to him, and all the people of Jerusalem; and they were being baptized by him in the Jordan River, confessing their sins. 6 John was clothed with camel’s hair and wore a leather belt around his waist, and his diet was locusts and wild honey."

When the Holy Spirit inspired the original documents of the Old and New Testament, He did not waste space. The point of describing what John the Baptist wore and ate had to do with demonstrating his continuance in the Old Testament prophetic office. According to 2 Kings 1:8, the prophet Elijah himself wore similar garb. Furthermore, references to John's consumption of locusts demonstrated his following the dietary laws concerning "clean" and "unclean" in Leviticus 11:21-22. As to the reference to "honey", a scan of the Old Testament scriptures will yield some sixty mentions of honey. Passages such as Psalm 19:10-14 use honey as a metaphor for scripture itself, describing it in terms of: "sweeter also than honey and the drippings of the honeycomb".

These three descriptions of John give us insight into what he was all about in his spiritual walk with the Lord: power of the Spirit (pictured by his garments); purity of life (his diet of locusts) and the preciousness of the Word (the honey he ate). Indeed, the follower of Jesus ought to have these traits operative in their life if they expect to be an "arrow pointing to Jesus".

John's life and ministry would function to bring a close to the Old Covenant age and announce the arrival of the New Covenant era as inaugurated by the incarnate Christ. Jesus Himself said of John the Baptist in Matthew 11:11-13 -

"Truly I say to you, among those born of women there has not arisen anyone greater than John the Baptist! Yet the one who is least in the kingdom of heaven is greater than he. 12 From the days of John the Baptist until now the kingdom of heaven suffers violence, and violent men take it by force. 13 For all the prophets and the Law prophesied until John."

Luke in his Gospel also records this same speech of Jesus about John the Baptist in Luke 7:24-33.

3. John the Baptist was commended by Jesus

"But what did you go out to see? A man dressed in soft clothing? Those who wear soft clothing are in kings’ palaces! 9 But what did you go out to see? A prophet? Yes, I tell you, and one who is more than a prophet. 10 This is the one about whom it is written, ‘Behold, I send My messenger ahead of You, Who will prepare Your way before You.’ 11 Truly I say to you, among those born of women there has not arisen anyone greater than John the Baptist! Yet the one who is least in the kingdom of heaven is greater than he. 12 From the days of John the Baptist until now the kingdom of heaven suffers violence, and violent men take it by force. 13 For all the prophets and the Law prophesied until John. 14 And if you are willing to accept it, John himself is Elijah who was to come. 15 He who has ears to hear, let him hear."

That latter phrase spoken by Jesus, "He who has ears, let him hear", urges us to pay attention to what He just said. Jesus defended and validated all John had done. John the Baptist would be arrested, imprisoned and beheaded for confronting Herod's immorality and for articulating the truth of God's Word (see Matthew 4:12; 14:1-12; Mark 6:16-29; 9:13; Luke 3:18-20). John himself became very discouraged while in prison, wondering whether Jesus "was the One" (Matthew 11:2-6; Luke 7:18-23). Yet, John's faith was not snuffed out.
Jesus' vindication of John speaks volumes to how He ever lives to make intercession for every follower of His as He presides as the Eternal High Priest at the Father's right-hand (Hebrews 7:24-25). Jesus wanted to make sure John's ministry (which may had last no longer than a year) would not be forgotten. This ought to remind every Christian who aspires to be an "arrow for Jesus", that the Lord is ever advocating for you and that your efforts are not in vain. Hebrews 6:10 tells us:

"For God is not unjust so as to forget your work and the love which you have shown toward His name, in having ministered and in still ministering to the saints."

4. John the Baptist was an arrow, pointing to Jesus

Can it be said of any Christ-follower that others see your life pointing to Jesus? John's motto of his own life is summarized in the statement he made in John 3:30 - "He must increase, but I must decrease." This is what it means to be an "arrow, pointing to Jesus".
Posted by mahlon at 9:31 AM