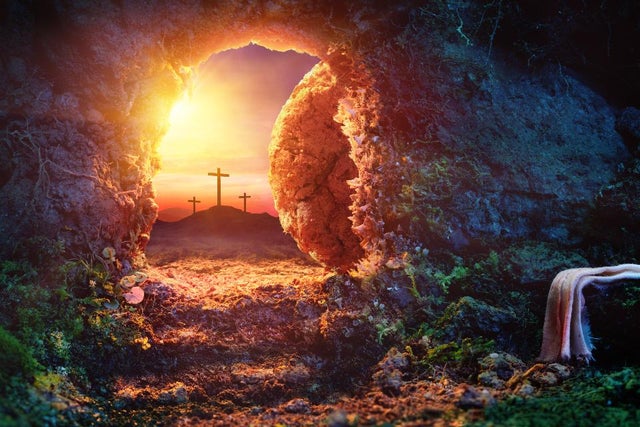 When one reads the above closing text of 1 Corinthians 15, it has the ring of an "obituary about death". Paul's whole point in 1 Corinthians 15 is to detail how we can know not only the historicity of Jesus' resurrection from the dead, but also its life-practical and eternal implications. When it is all said and done, what Christ achieved on that first Easter morning not only had historical significance and life-changing power, but cosmic implications. When I say "cosmic", I mean the supernatural war that the kingdom of darkness has waged against God since Lucifer's cosmic rebellion in heaven at the near beginning of creation (see Isaiah 14; Ezekiel 28). Satan's introduction of sin to Adam and Eve, and their compliance to his temptation, resulted in curse, sin and death on the whole physical creation (see Romans 5:12-21; 8:20-25).
Would Death have the final word? So it would seem. One population statistic I read of years ago suggests that over 12 billion human beings have lived on our planet since its creation. All human beings since Adam have faced death in one way or another and lost. Yes, we can note of course two exceptions in the Old Testament in which God directly took Enoch to Heaven (Genesis 5:24) and the prophet Elijah to Heaven in a fiery chariot (2 Kings 2:12). Nevertheless, God forestalled what otherwise would had been Enoch's and Elijah's appointments with physical death (Hebrews 9:27). Death keeps its appointments. No one had ever died and came back by their own power, let alone experienced a physical transformation of their body as Jesus did.
God's curse on creation would result in death's seeming permanence. Old Testament prophecy predicted a time will come when death's universal pattern will be reversed (see Job 19:25-27; Daniel 12:1-3). Still, these prophecies indicate that such reversal would not happen until the end of history. Would death itself ever fail to take even one human being?
On Easter morning Death was dealt a major loss. Jesus Christ did not merely cheat death of a victory, He conquered it. Furthermore, His resurrection included the transformation of His physical body in the grave, meaning He would never die again. We see roughly half a dozen instances in the Bible where prophets, and even Christ Himself, would rescucitate people by bringing them back from the dead (Lazarus is the most famous of these in John 11). But eventually, Lazarus would die, since his body had not experienced the transformation to glory and immortality that accompanies resurrection. Jesus on the otherhand experienced this glorious transformation. As Sovereign God in human flesh, Jesus took the end of history and inserted it into the middle of this present age by His resurrection from the dead. Death lost! Christ will never die again! He is risen! What this means is the beginning of the reversal of Death's dominion, as described by Paul's term for Jesus as being the "first fruits" of such a reversal (see 1 Corinthians 15:20,23). Every Christ-follower looks forward to the day when they will experience a resurrection of their own from the dead or, if still alive at Christ's appearing, be taken up into Heaven with their bodies transformed like Enoch and Elijah (see 1 Corinthians 15:51-52; 1 Thessalonians 4:13-18).

In thinking on what Paul writes in 1 Corinthians 15:54-57, the thought came to mind concerning "death's obituary". It appears Paul had in mind the words of Isaiah the prophet in Isaiah 25:8-9
"He will swallow up death for all time,
And the Lord God will wipe tears away from all faces, and He will remove the reproach of His people from all the earth; for the Lord has spoken.
9 And it will be said in that day, “Behold, this is our God for whom we have waited that He might save us. This is the Lord for whom we have waited;
Let us rejoice and be glad in His salvation.”
What Jesus achieved on that first Easter morning made Him the first to conquer death! We certainly find evidence of Christ's victory over death issuing forth on that first Easter morning, as found in Luke 24:1-8 -
"But on the first day of the week, at early dawn, they came to the tomb bringing the spices which they had prepared. 2 And they found the stone rolled away from the tomb, 3 but when they entered, they did not find the body of the Lord Jesus. 4 While they were perplexed about this, behold, two men suddenly stood near them in dazzling clothing; 5 and as the women were terrified and bowed their faces to the ground, the men said to them, “Why do you seek the living One among the dead? 6 He is not here, but He has risen. Remember how He spoke to you while He was still in Galilee, 7 saying that the Son of Man must be delivered into the hands of sinful men, and be crucified, and the third day rise again.” 8 And they remembered His words."

Death's Obituary - By Debi Smith
Death, formerly from the region of Hades, died on Easter morning surrounded by legions of stunned and terrified demons. Death lived a long life. Some of His biggest claims to fame included scaring and immobilizing people from living; killing people that thought they had tomorrow; and separating people from loved ones until Death decided it was there time as well. Death leaves behind no one to mourn him. There will be no services, but there will be a celebration held at a later date when Jesus Christ comes back to claim His followers. At that time, there will be a burial as Death will be cast into the lake of fire never to be seen again. In lieu of flowers or donations, we ask that everyone seek the Lord while He may be found and embrace eternal life."
Posted by mahlon at 5:30 AM