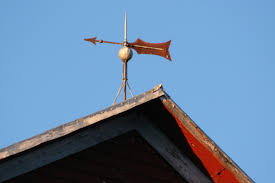 Proverbs 3:9-10 "Honor the Lord from your wealth and from the first of all your produce; 10 So your barns will be filled with plenty And your vats will overflow with new wine."

Introduction: The beauty and purpose of lightning rods and God's lightning rod of blessing
I can recall when living in Pennsylvania the many farms that dotted the rolling hills and lush valleys.  When driving on those winding two lane highways, I would behold herds of black and white Holstein cows, endless rows of field corn with tassels waving in the early summer winds and Amish buggies clip-clopping their way on cold fall mornings.  On top of the farmhouses and red barns one could spy two, three or more ornate but functioning lightning rods.  Lightning rods function to take a lightning strike and direct the powerful current safely and quickly into the ground.  As any scientist will tell you, electric current follows the path of least resistance and the most direct and shortest path.  Much can be learned from considering the relationship between lightning rods and how they picture another type of lightning rod that God has prescribed to His people to direct the blessings He intends to the right areas of their lives. What is that lightning rod of blessing of which we speak? Tithing and stewardship.

When you consider all of the scriptures that speak of giving of one's first-fruits or tithing (roughly 100 in all), it is without question God's intention to bless His people and instruct them about how He views resources and His people's relationship to their resources. Today we will take the acrostic r.o.d and consider some of those texts as we aim to answer the following question: why is it important to tithe to the Lord? The following three headings will be used in bring that question to bear on your life and mine:
Relevant to you today.
Opens you to God's supernatural power
Directs you to walk by faith, not by sight

With this subject being so vital, we will only cover the first two thoughts and continue with the third thought for tomorrow's post.  So why should you and I put up God's lightning rod of blessing? Why is it important to tithe to the Lord? Notice first of all that it is...

Relevant to you today.
As you read through scripture, the particular word "tithe" or "tithing" occurs more than forty times, the closely related concept of "first-fruits" (for crops) and "first-lings" (for animals) occurs over 30 times and the idea of "tenth" in the realm of stewardship appears over 20 times. The last time we find tithing mentioned in the Old Testament is in Malachi 3:10 "Bring the whole tithe into the storehouse, so that there may be food in My house, and test Me now in this,” says the Lord of hosts, “if I will not open for you the windows of heaven and pour out for you a blessing until it overflows." Now many well-meaning Christians assume that tithing was nothing more than an Old Testament regulation, given by God under the period of the Law. Often I have heard Christians say, and I'm sure you have as well, that since we are no longer under law but under grace, that means we can now give whatever we want, since tithing went away due to Christ's accomplished work.Is that true? Did Jesus' death, burial and resurrection do away with the standard of tithing? Whenever studying both the Old and New Testaments, unless God has either removed or replaced a given institution or command, we can assume that the command or institution carries forth from Old to New Testament. Jesus for example used very similar language as that of Malachi 3:10 in his first sermon in Luke 6:38. When Jesus rebuked the Pharisees in Matthew 23:23 for focusing on tithing above the "weightier matters of the law", He is not abolishing the tithe, rather He is admonishing the attitude of their hearts and neglect of God's Word. If anything, Jesus' teaching gets us to the heart of stewardship (Matthew 6:33) and does not do away with the Divine standard of tithing.
As one journeys into the New Testament, several key Old Testament practices or institutions were replaced and removed.  For example, the Levitical priesthood was done away with when Christ came, since His priesthood is of a different order. (Hebrews 7-10) We also don't sacrifice animals due to the fact that Christ's subsitutionary death satisfied the wrath of God against the sins of those who receive His work by grace through faith. (1 Peter 3:18) However, we discover not one prohibition against tithing. The standard of 10% was ordained by God some 400 or so years before the giving of the law. Abel (Genesis 4:4), Abraham (Genesis 14:20) and Jacob (Genesis 28:22) were tithing millennia before Christ and centuries before the giving of the law. The law of God served to reinforce the standard, however when Christ came, the standard was never removed nor replaced.In studying the over 100 passages that speak on the subject of stewardship and tithing, here is what we discover:1. A person is free to give whatever they want (offering) only after they have been already tithing. 2. Tithing represents the most basic level of stewardship, the ground floor if you will. Whenever we begin to tithe is whenever we begin to hear God in the realm of giving.3. Wherever the believer is told to give in the liberty of his heart and conscience, it can be assumed that the believer has already been tithing. (2 Corinthians 9:6-10)

So yes dear friend, tithing and stewardship is relevant for you and me today. It still remains God's lightning rod of blessing. However there is a second reason as to why we should tithe to the Lord....

Opens you to God's supernatural power
The only way you and I can accomplish the impossible or believe that God can do impossible things is by humbly acknowledging that His words are more trustworthy than our opinions. By His Spirit the Christian is able to conclude and continue entrusting God with the salvation of their souls. (2 Timothy 1:12) Yet why is it when it comes to resources and finances we hesitate? In the realm of lightning rods, lightning will seek the path of least resistance. All the time people will quote passages such as Philippians 4:19 without considering the context within which occurs - namely that of giving and stewardship.

Whenever you and I are converted to saving faith, our relationship toward four books should change. First, our relationship to The Book, the Bible, ought to change, being that as converted saints we conclude it to be what is really is: God's precious, infallible, inerrant word. (1 Thessalonians 2:12-13). Secondly, our datebook ought to change, being that your appointments and plans are directed by the Lord moreso than circumstance or person preference.  Thirdly, your songbook ought to change.  Overtime the believer will learn to appreciate music that edifies the spirit man and not just the senses.

However there is a fourth book that ought to become different - and that is the checkbook. Solomon writes in Proverbs 3:9-10 "Honor the Lord from your wealth and from the first of all your produce; 10 So your barns will be filled with plenty And your vats will overflow with new wine." In a texts where we are told to "trust in the Lord with all our heart and lean not unto our own understanding...." (Proverbs 3:5-6), scripture gives us a test to see whether we believe that truth - namely our resources and finances.  Paul writes in 2 Corinthians 9:8 "And God is able to make all grace abound to you, so that always having all sufficiency in everything, you may have an abundance for every good deed." Space does not permit, but the Old Testament text quoted by Paul in the context of the passage (Psalm 112:9) indirectly alludes to tithing and stewardship.

God prescribes tithing to you and I dear Christian not to shackle us but to free us.  He desires and wants to bless us far more than we do.  He aims to raise our idea of blessings from the material to Himself, for to be blessed simply means I have His power and presence coursing through my life.  The lightning rod of blessing - tithing, is given by God to give me a chance to open a doorway whereby He can unleash His supernatural power into my finances and so much more.