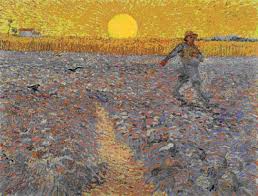 Matthew 13:10  "And the disciples came and said to Him, “Why do You speak to them in parables?”

Introduction and Review
In yesterday's post we considered what a parable is and how to interpret them.  In today's post we want to consider why He told parables.

The question is asked and Jesus' answer
After telling the parable of the soils in Matthew 13:1-9, the disciples ask Jesus this question: “Why do You speak to them in parables?” In the answer Jesus gives in Matthew 13:10-17 we can glean four reasons why Jesus told parables:

1. Instruct true believers. 13:10-12
Jesus states in Matthew 13:10-12 "Jesus answered them,“To you it has been granted to know the mysteries of the kingdom of heaven, but to them it has not been granted. 12 For whoever has, to him more shall be given, and he will have an abundance; but whoever does not have, even what he has shall be taken away from him." Parables are amazing in that they give an arena in which Sovereignty can work to bring about a response and human responsibility can reject. Those to whom the message is intended (i.e the disciples and those whom Jesus is looking to reach) will get it.  They already have it in them to come to the truth.  For others, they are too busy, or distracted or some other excuse, resulting in them not "getting" what Jesus is teaching.  True believers will get the parables, and act on what Jesus is saying.  Notice now a second reason why He chose to tell parables....

2. To fulfill Prophecy. Matthew 13:13-15
Jesus saw Himself fulfilling the prophecy that He quotes in Isaiah 6:10. In Isaiah's prophecy God had given him a mission to preach to people in Israel.  Not everyone was going to believe and it was going to be a very hard ministry.  However the value of Isaiah's task did not lay in the response but rather in the One who sent Him.  Furthermore, God's Sovereign purposes included having a remnant known to Him in whom He would work. Though most would reject Isaiah's message of their own genuine choice, the message had an intended target. Jesus saw Himself fulfilling prophecy, indicating that as Messiah, He was to proclaim the Kingdom in parables. These same verses leads us to the third reason why Jesus told parables...

3. To sift out make-believers. Matthew 13:13-15
In Jesus' ministry, as well as the church today, there is always a mixture of true believers and make believers.  In the same 13th chapter of Matthew Jesus describes such a mixture as "wheat" (true believers, those who possess genuine faith) and make-believers (false believers or merely "professors of faith"). The remarkable reality of the parables was that a typical crowd could hear the same parable and yet give different responses.  Anyone who walked away from Jesus or who failed to take in what He was giving them was to blame.  Yet for those who did take in what Jesus was saying, God's work of Sovereign grace was to be credited.  Parables uniquely and remarkably preserve that tension we often times see in scripture between God's Sovereignty and human responsibility. Sifting out the "genuine" from the "phonies" was one of the purposes of the parables. Now notice the fourth reason Jesus told parables...

4. Harvest more true believers. Matthew 13:16-17
We read in Matthew 13:16-17 "But blessed are your eyes, because they see; and your ears, because they hear. 17 For truly I say to you that many prophets and righteous men desired to see what you see, and did not see it, and to hear what you hear, and did not hear it."  Jesus undoubtedly was speaking mainly to his inner circle of disciples.  However for those who had been so affected by Jesus words, for those who had it in them to take what Jesus said to heart - He is essentially saying: Come! Follow Me! Notice three key words in Matthew 13:16-17 that describes for us a heart operating in true saving faith: "see"; "hear" and "desired". When anyone hears the words of God and they are affected by what they hear, no one will be able to drive them away.  The supernatural grace of God brings about a response.  That person is set free and they have it "in them" to take to heart and act out what Jesus is saying.  They not only hear and see but desire to hear and see more.

Conclusion:
So why did Jesus tell parables? As we saw today, four reasons: 1). Instruct true believers 2). Fulfill prophecy 3). Sift out make-believers and 4). Harvest True Believers .
Posted by mahlon at 8:14 AM